Astronomers have confirmed that the star HD 140283 is nearly as old as the universe. 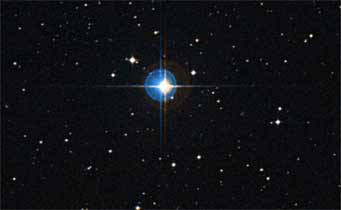 The star HD 140283 lies 190 light-years away in the constellation Libra. High-precision measurements with the Hubble Space Telescope confirm that the star is one of the oldest in the universe.

The search for the oldest stars in the Universe has just turned up a new candidate: HD 140283. This 7th-magnitude sub-giant has intrigued astronomers for decades. It was one of the first stars found with an extremely low concentration of heavy elements in its outer atmosphere, compared with the Sun. And this composition makes the star — which has roughly the same temperature as the Sun — look like a star twice as hot as it is.

Now, Howard Bond (Space Telescope Science Institute and Penn State) and his colleagues have confirmed that HD 140283 may be one of the first stars born after the Big Bang, they report in the March 1st Astrophysical Journal Letters.

Estimating a star’s age is a tricky business. Astronomers need several different kinds of observations in order to pin the age down. In the case of HD 140283, this meant acquiring photometry, spectroscopy, and parallax measurements for the star. Parallax is the apparent motion of nearby stars against the celestial background due to Earth’s real orbital motion around the Sun, and measuring it provides a direct estimate of the star’s distance from the Earth.

You can see the effect of parallax if you hold one finger up at arm’s length and blink one eye closed, then the other. Your finger moves relative to the distant background; if you move your finger closer to your face, the motion increases. The same wobble is seen in stars, with closer stars wobbling in larger ellipses. (They trace ellipses because Earth moves in an ellipse.) Measurements like these are vital to astronomy because they require no assumptions or models.

By combining the parallax and apparent brightness of HD 140283, Bond and his team re-derived the absolute magnitude of the star, which is related to its mass and age. Previous measurements of HD 140283’s parallax came from the Hipparcos satellite, which measured parallaxes for stars 8th magnitude and brighter during the 1990s. Bond’s team used the Fine Guidance Sensors on the Hubble Space Telescope to reduce the uncertainty in the parallax by a factor of two. Soon, billions of stellar distances will be measured with the GAIA satellite, expected to launch later this year. GAIA, along with surveys like LSST, will revolutionize our knowledge of stars.

It’s important to note that astronomers’ understanding of stellar properties is a relatively new field. Two of the most influential stellar astronomers, Annie Jump Cannon and Cecilia Payne, worked during the early 1900s to develop a classification system and a theoretical understanding of how stars behave, both of which are still used today.

Bond and his team compared the absolute magnitude of HD 140283 to a series of theoretical predictions for stars with varying concentrations of elements heavier than helium. The amount of heavy elements, known to astronomers as metallicity, dictates which model prediction should be used to derive the star’s age. Since the improved distance estimates led to a more precise absolute magnitude measurement, HD 140283’s age could be measured more precisely, to 14.46 billion years, with an uncertainty of 800 million years.

The star is certainly not 14.5 billion years old: measurements of the cosmic microwave background have constrained the age of the Universe to 13.77 billion years, with an uncertainty of just 60 million years. Astronomers think star formation began around 400 million years after the Big Bang, and if HD 140283’s age is at the lower end of the new estimate, its genesis fits (barely) in that window. Previous work has also suggested a dawn-of-creation age for this star, but the precise parallax measurements by Bond’s team have narrowed the uncertainty.

As one of the oldest stars known, HD 140283 is a marker for the earliest generations of star formation, when the Milky Way was just starting to form. Studying this star and others like it will allow astronomers to unravel the mysteries of our galaxy’s past.

In addition to the Draper catalogue number we could give this star a pet name like "Methusleh" or "gramps". I'll look it up on a star chart so we can view it at star parties.

I would like to know more of this star's properties, such as mass and size. How is it still burning if it's not a red dwarf? It should have gone nova or collapsed into a white dwarf long ago.

Isn't this star a bit old for a second generation star?

It cannot be a first generation star because it has a measurable metallicity.

Are the authors of this research papering over a potentially serious conflict with the age of the observable universe?

This report has some interesting links like the ApJ letter. Seems like nuclear burning rate changes for N and O could indicate some Milky Way GCs are still older than the Hubble time for the big bang. Reference: H. E. Bond et al. "HD 140283: A Star in the Solar Neighborhood that Formed Shortly After the Big Bang." Astrophysical Journal Letters, 1 March 2013. Just how big is the universe 13.77E+9 years ago? <=Planck length? If 3D space was larger the Hubble time could fall apart too 🙂

HD 140283 is such a nondescript name for such a stellar star. I second Robert Simpson’s notion that it be called “Methuselah’s Star” (Genesis 5:25-27). I too would like to know more about how to find it than just that its a 7th mag. star 190 ly away “in the constellation Libra” What are its coordinates?

Bruce, here's what Visier pumped out for that Draper catalog number. Lots of data there including RA and Dec:

Hi Gaylon. You are definitely correct, red dwarf stars have main sequence lifetimes much longer than the age of the Universe. HD 140283 has evolved off the main sequence and is headed to the red giant branch, but it hasn't reached the white dwarf part of its evolution.

Thanks, John, for clearing that up, but I'm still confused about, "And this composition makes the star look like a star twice as hot as it is." Does it “look like” a star emitting mostly ultraviolet, even thought it’s emitting mostly visible light?

Hi Peter. The star is weak in heavier elements, so the overall spectral appearance is similar to an A-type star, which typically shows only some Balmer absorption. Main sequence stars at these temperatures typically have a lot more absorption from heavier elements.

I glanced at the original article. The star has very weak emission lines because it has such low concentrations of heavier elements and thus the spectrum resembles a very hot star where the lines are also weak. That's how it looks hot.

Some heavy elements would have been produced within the star during its lifetime-it's moving off the main branch, so it's done a lot of fusing.

Thanks Chuck. From your ref. the coordinates are RA 15 03.1, Dec -10 56 01 (epoch 2000) Even with all that data I was still unable to find this star’s mass and size, so if anyone can supply that info it will be helpful. As Prof. Oldershaw points out this object cannot be a first gen. star because it does have some metals (elements heavier than He). As to its mass, it cannot be a lightweight red dwarf (as Gaylon noted and John B. confirmed), but it must also be less massive than our Sun for it to still exist in its present form. That would have made it an Orange Dwarf (?) before it evolved off the main sequence into a Sub Giant. The fact that it is now a SG shows that it is just now running low on H to fuse into He. Paleontologist, I do not think that this star could have produced any of its meager supply of metals because low mass stars such as this can’t reach the required core temps for one thing and secondly you cannot make elements heaver than carbon before a great deal of C accumulates by the fusion of 3 He nuclei. Thus, as old as this star is, there would still have had to have been an even earlier (Pop III) star that had gone supernova to supply HD 140283’s metals.

In the article’s photo note the doubled diffraction spikes in the left/right axis. Could this ancient wanderer be a binary, or is it just passing in front of a background star? If it’s binary then its mass could be pinned down quite well.

Geoff L, although I'm a layman too I’ll try to see if I can be of help. I believe that the answer to your first question is no, and here’s why. Before the very first stars formed the gas that they were to form from had to cool off. This early gas only contained Hydrogen, Helium and some Lithium, as no heavier elements were generated in the big bang. Stars of today actually can begin fusion reactions at lower core temperatures than the first stars due to the presence of the elements Carbon, Oxygen and Nitrogen. These elements serve as thermonuclear catalysts, allowing H to be fused into He at lower pressures than what is required if the C, O & N are not present. As these elements were missing from the first generation of stars the first stars had to be much more massive than the stars of today to generate the higher pressures and temps required to fuse H directly. The masses of the first stars are thought to have been up to 200 suns, but once they ignited they would have burned through the elements up to iron very quickly and then they would have all went supernova relatively quickly. None of these earliest generation of stars still exist today. Galaxies would have started out just as denser gas pockets in the early universe. Any old stars in the Milky Way such as this HD 140283 would have either always been a member of this galaxy or it may have come from one of the numerous smaller galaxies that the Milky Way has cannibalized over the millennia. I hope that helped.