A new study suggests that lonesome stars in galaxies’ farthest outskirts contribute to a mysterious, blotchy glow that permeates the sky.

An infrared view of the night doesn’t look all that different from the visible-light view we’re used to: stars and galaxies predominate. But even if you removed every known source of infrared light, down to the faintest star and galaxy and nebulae too, you’d still be left with something: a blotchy infrared blush painting the sky.

The left image shows a section of sky toward the Boötes constellation in infrared light. The right image shows the same on a different color scale, where galaxies and other known sources of infrared light have been masked out in gray. What's left is a blotchy blush, and astronomers are still trying to figure out why it's there. (Click for a bigger image.)

That glow, known as the cosmic infrared background (CIB), has mysterious sources either too far away or too individually faint (or both) to resolve. Astronomers have long hope that the CIB might tell something about the very first stars and galaxies that set the universe alight. But a new paper published last week in Nature suggests that finding such early evidence might be much harder than previously thought.

Unlike the similarly named cosmic microwave background — the relatively smooth microwave glow left over from the heat of the Big Bang — the CIB is clumpier, gathered into mottled spots. Unlike the primordial microwaves, the infrared radiation isn’t left over from the formation of the universe. Rather, it radiates from some as-yet-unidentified astronomical sources that no current telescope can resolve. Two possibilities are currently popular with theorists: faint, faraway galaxies hailing from the very young universe, or dwarf galaxies somewhat closer.

Now Asantha Cooray (University of California, Irvine) and his colleagues have thrown a monkey wrench into both theories. They analyzed the Spitzer Space Telescope’s Deep Wide-Field Survey, which isn’t as sensitive as some previous infrared maps but covers more sky. Its size meant that Cooray’s team could test theories against observations for blotches as large 30 arcminutes, the angular size of the Moon. 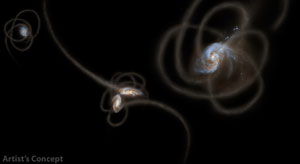 Astronomers have long argued about the mysterious source for the blotchy infrared glow that permeates the whole sky. Now Asantha Cooray and colleagues are suggesting that much of the cosmic infrared background could be due to stray stars torn from galaxies during violent galaxy collisions. The tidal streams of stars torn from their host galaxies during mergers are shown in this artist's concept. (Click for a bigger image.)

Previous theorists have found that stars stripped from their galactic homes, such as during a collision with another galaxy, could stay in their galaxy’s extreme outer halo. Every galaxy is embedded in a pool of dark matter much larger than the galaxy itself; loose stars might contribute some light to these otherwise dark halos. This is the first time that halo stars have been suggested as a source for the cosmic infrared background.

“Individually, the stars are too faint to be seen, but we think we’re seeing their collective glow,” Cooray said in a NASA press release.

Not everybody agrees that the old theories have to be ruled out completely, even if they are insufficient to explain the current data.

“Discrepancies merely show the inadequacy of the models, which then need to be refined,” says Alexander Kashlinsky (SSAI, NASA/GSFC). Kashlinsky, who was not involved in the study, has previously used more sensitive data — albeit covering smaller angular scales — to support the more popular theory that early galaxies are responsible for the mottled infrared sky.

“I find [the halo-star] model very interesting, but am highly skeptical that it can withstand confrontation with the empirically established data,” Kashlinsky adds.

“Who is right?” asks Elizabeth Fernandez (Institut d’Astrophysique Spatiale, France), a theorist not involved in either Cooray’s or Kashlinsky’s studies. “Honestly, right now, I think it's hard to say.”

“If the paper by Cooray and his colleagues turns out to be correct, this means that we will have a firmer idea of the foreground component of the infrared background,” Fernandez explains. “This can only be good — it will give us a better idea of what is left over.”

In other words, if the “halo star” component of the infrared background can be confirmed — and removed — then astronomers might yet get their chance to study the light from the universe’s first stars.

The spherical distribution of gamma ray bursts told researchers the bursts were NOT coming from the galactic disk. The same reasoning would seem to apply here. If the CIB is streaky, as in the artist’s rendition, then it could be galactic; if it’s patchy but homogenous, as in the photo, it’s probably cosmic. The photo is only a tiny piece of the sky, however. Any information on whether the CIB all-sky picture is streaky or uniform?

Peter, that's a good point, but it's still possible to have a spherical halo that is disconnected from the disk. Even globular clusters are distributed in a spherically symmetric cloud about the center of the galaxy. For a more local analogy, consider that the planets of the Solar System all line up in a relatively flat plane while the Oort Cloud is believed to be nearly spherically symmetric. Halo stars could be in a spherical cloud.

If there were any such 'stray' halo stars around our Galaxy, shouldn't they show up in the Hubble Deep Field? There are very few stars there, and none of them are extremely faint.