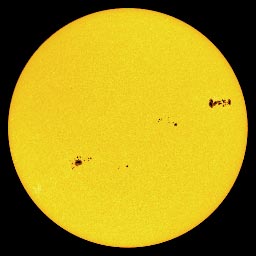 The Sun early on Wednesday, June 11th, as recorded by the European Space Agency's Solar and Heliospheric Observatory.

We're now more than three years past the peak of the Sun's magnetic-activity cycle, but our daytime star seems not to have noticed. This week the Sun has been particularly active, raising hopes among skywatchers at middle latitudes that they'll get a rare chance to see a display of the aurora borealis (northern lights).

If you look at the Sun through a safe solar filter today or tomorrow, even without the benefit of binoculars or a telescope, you'll notice two sunspot groups. The larger one, big enough to swallow the Earth nearly 10 times over, is approaching the northwest limb and will rotate around to the solar backside within a few days. Cary Oler of Solar Terrestrial Dispatch reports that this enormous spot complex has spawned multiple large solar flares and is likely to keep flaring as it rounds the limb. Because of this spot's location at the Sun's edge, the plasma it is spewing into space will almost certainly miss the Earth.

The second sunspot group, already quite large and still growing, is nearing the center of the Sun's disk. This complex hasn't yet produced any significant eruptions, but Oler calls it "a candidate for possible energetic major flare activity" in the coming days. If it does erupt, it could send a torrent of charged particles right at us, increasing the likelihood of auroral storms on subsequent nights.

Even if that happens, though, aurora hunters will not have an easy time of it — the bright light of the full Moon will wash out all but the brightest auroral rays and curtains.