Despite four centuries of telescopic study, we still don't fully understand our Sun. But the scientists who came to the annual meeting of the Solar Physics Division of the American Astronomical Society (held May 26–30 in Fort Lauderdale) are working hard to narrow our knowledge gap. They offered their most recent insights on topics ranging from coronal heating to the origin of the solar wind. 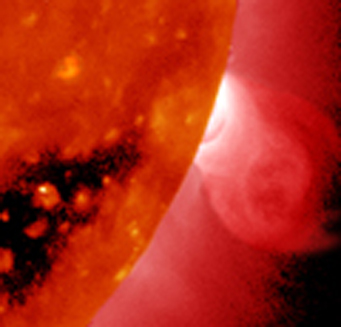 On April 9, 2008, the XRT imaged this powerful coronal mass ejection from just behind the Sun's limb.

New observations with the X-Ray Telescope (XRT) on Japan's Hinode solar spacecraft captured an unprecedentedly detailed view of a coronal mass ejection (CME) on April 9th. CMEs are giant blowouts of hot, ionized gas from the Sun's outer atmosphere. When they strike Earth's magnetic field, they often set off auroras and other near-Earth disturbances. Scientists believe that the events leading to a CME may also help to heat the solar chromosphere and corona to their anomalously high temperatures.

At the meeting, Ed DeLuca of the Smithsonian Astrophysical Observatory (which built and runs the XRT) reported that this particular CME started just around the edge of the Sun from our viewpoint. This lineup hid the dazzle of the associated X-ray flare and allowed the XRT to take longer exposures of the CME's upper reaches. The views show the CME's structure unwinding in a twist as it left the Sun.

Such unwinding releases a lot of energy. CMEs travel about 2,400 km per second as they leave the Sun, fast enough to cross the continental United States in two seconds. When aimed in our direction, they reach Earth in hours.

While fuzzy, the movie from which this still is taken verifies what astronomers had only seen in computer models: the unwinding of a CME.

Also, a pair of NASA spacecraft called STEREO captured twisting structures leaving the Sun a year ago, on June 7, 2007. One of the two craft precedes Earth in its orbit and the other follows, giving a three-dimensional view of solar gas structures. Comparing the observations with computer simulations, Spiros Patsourakos and Etienne Pariat of George Mason University explained that the twisting in the embedded magnetic field is important in starting ejections from the solar surface.

Hinode also carries the Extreme Ultraviolet Imaging Spectrometer (EIS), which allows astronomers to see the Sun's atmosphere at a wide range of temperatures (from thousands to millions of kelvins) and follow tiny regions as they heat and cool. The EIS takes spectra at different ultraviolet wavelengths while it scans across the Sun. Ignacio Ugarte-Urra, Harry Warren, and Guillermo Stenborg (Naval Research Laboratory) reported on EIS views of magnetic loops of coronal gas. Their movies show how the gas gets hotter and colder, radiating with different spectral lines over time.

Such loops are always on the Sun and contribute to the corona's structure. The team's observations indicate, indirectly, that small filaments make up the observed loops while occupying only about 10% of the loops' overall volume. But the EIS's spatial resolution is only about 500 miles on the solar surface, and their observations indicate that spacecraft would need resolution 10 times sharper than that to see the filaments directly.

A major section of the Solar Physics Division meeting honored Eugene Parker, a solar physicist retired from the University of Chicago. Parker deduced 50 years ago the existence of the solar wind, as an expansion of the solar atmosphere at supersonic speeds. (A German scientist had previously inferred the presence of the solar wind indirectly from its effect on comet tails.)

Later, solar astronomers learned of two distinct types of solar wind: fast and slow. The fast component streams directly out of coronal holes, regions in the corona of relatively low temperature and density. This "fast" wind reaches Earth in two days, while the "slow" wind, from elsewhere, takes four days. In addition, the two types of solar wind have different compositions.

Nathan Schwadron and Nancy Crooker, both of Boston University, each defended a different theory for how the solar wind forms. Schwadron concluded that its properties depend on what kinds of coronal loops it emanates from. Crooker, along with Steven Cranmer of the Harvard-Smithsonian Center for Astrophysics, concluded that the solar wind can originate from any part of the turbulence and waves that exist all over the Sun's surface.

Cranmer has also shown that the "slow" wind can arise near the edges of coronal holes even though its composition differs from what comes out of the holes themselves.

A series of three "Parker Lectures" covered various parts of the solar atmosphere, representing the contributions of Eugene Parker to the understanding of each. Parker Lectures are now a regular feature of Solar Physics Division meetings.

Jay Pasachoff is a solar astrophysicist and the Field Memorial Professor of Astronomy at Williams College in Massachusetts.