Admit it: At some point you've probably thrust the tip of your index finger (2° across, more or less) skyward to cover up the Sun's disk (½°, more or less). Isn't it amazing how a simple body part can momentarily obliterate a star nearly a million miles across? 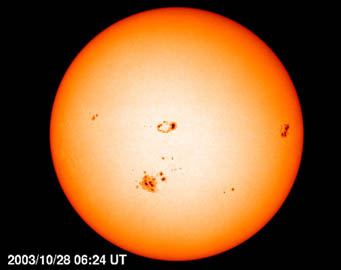 In October 2003, the Sun”™s disk included active region 10486, which became the largest sunspot seen by SOHO. Click here for a larger version.

Using gadgetry far more sophisticated than a fingertip, astronomers have been measuring the Sun's diameter ever since the 17th century — and they've gotten very good at it.

So has our star changed size in all that time? Hard to tell. You'll get a different result depending on the technique used, the wavelength of light used, and what exactly you define as the Sun's "edge."

A new result, announced this week by a team of solar physicists, tries to sidestep all of these vagaries by using only measurements taken by a single instrument over 12 years simply to see if the Sun's diameter has changed — and the answer, apparently, is "no."

Jeff Kuhn (University of Hawaii) and three colleagues find that the Sun's mean diameter hasn't changed more than one part in a million since 1998. And what makes them so sure? They've sifted through some 500,000 frames taken by the Michelson Doppler Imager aboard the Solar and Heliospheric Observatory. Launched in December 1995, SOHO has followed the Sun through a full 11-year solar cycle and then some. Moreover, it doesn't have to contend with turbulence in Earth's atmosphere. 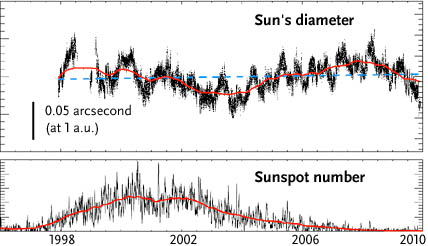 An analysis of more than 500,000 SOHO images since 1998 shows that the Sun's diameter is remarkably steady (red line in upper panel), even when compared to solar-cycle activity (red line in lower panel). Click on image for a larger view.

"Getting above the atmosphere is an enormous advantage for astrometry, more than an order of magnitude improvement," Kuhn explains, "and we just don't see any solar-cycle variability." His team's analysis of SOHO observations will appear soon in Astrophysical Journal.

The same can't be said about measurements taken closer to home. Measurements using astrolabes, Mercury transits, and eclipse timings, among others, reveal variations 10 to 100 times larger. Yet they all show bigger swings in the Sun's size, which suggests that the ground-based measurements are indeed correct but systematically influenced by some kind of subtle atmospheric effect. (That said, measurements taken from high-altitude balloons in 1992-96 inexplicably show the same trend.)

Kuhn has a hunch that this apparent discrepancy between ground and space is "telling us something interesting about how the solar cycle affects the stratosphere."

"All mechanisms are speculative," he notes, but pointedly adds, "That the solar diameter is rock-solid is not speculation."

Fortunately, even better measurements will be in hand soon. The researchers plan to repeat their work using images from NASA's just-launched Solar Dynamics Observatory. By 2017, they'll have access to the exquisitely detailed views from Advanced Technology Solar Telescope being built at the summit of Haleakala in Hawaii.

From this graph, it appears there is little or no correlation of the number of sun spots with the 11 year cycle. Is there a "sun spot cycle"?

The Sun is known to be a sphere of plasma which is kept inflated by the photon pressure generated by two different fusion power processes: The proton cycle (which produces 98% of the Sunâs fusion power at a rate proportional to the 4.5 power of the temperature) and the CNO cycle (which produces fusion power at a rate proportional to the 20th power of the temperature). The Sun has been fusing hydrogen into helium for 4.6 billion years. Alas, it has insufficient mass and internal temperature to fuse helium into higher Z elements beyond carbon as the internal temperature rises at the end of the Sunâs life. Thus the buildup of helium âashâ in the Sunâs core increasingly interferes with the production of hydrogen fusion power before the Sun starts to expand. Convective stirring of the solar core helps reduce ash stratification but can lead to periodic instabilities in output power. From other measurements, it is known that the output power of the Sun varies slightly during the 11 year sunspot cycle. Given the fact that the middle-aged Sunâs gravity will cause the star to shrink in diameter when the internal fusion power declines or expand when the power increases, this current claim that the diameter of the Sun is stable to within nine orders of magnitude is inconsistent with the Standard Model and with measurements of Solar output power. It should be appreciated that once the Sunâs diameter starts oscillating and increasing, things could be pretty ugly for a planet which is only 150 million km away.

@Bryan: the 11 year solar cycle _is_ the sun spot cycle (more generally, it's a cycle of solar activity. But it can be pretty irregular, so looking at just a single 11 year cycle in a graph can be misleading. The current "solar minimum" has been unusually persistent. It should have ended a year or two ago, but we're only just now starting to see some sign of moving up in activity. The previous minimum was in about 1996 or 7, so the current one should have bottomed out in about 2007 or 8.

Yes, the size certainly is very close to constant, but if I did my math right, that tiny little 0.05 arc-second swing is pretty close to the volume of the entire earth !

Please check to see if you agree.

Yes, the size certainly is very close to constant, but if I did my math right, that tiny little 0.05 arc-second swing is pretty close to the volume of the entire earth !

Please check to see if you agree.