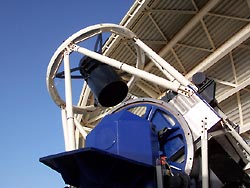 The 2-meter Liverpool Telescope atop La Palma in the Canary Islands achieved first light in July. The instrument will run autonomously or by remote control and is available to students in the United Kingdom.

The first telescopes off the assembly line of Telescope Technologies Ltd. (TTL) — a company attempting to turn meter-class research telescopes into mass-produced commodities — have captured their first light. In July the 2-meter Liverpool Telescope on La Palma in the Canary Islands became the largest fully robotic telescope in the world. Starlight was focused by eyepiece on the 21st, by autoguider on the 23rd, and by CCD camera on the 26th. Five percent of the observing time will go to secondary-school students in the United Kingdom, thanks to John Moores University (JMU). Schools can register at www.schoolsobservatory.org.uk.

On August 7th the TTL-built 2-meter Faulkes Telescope North atop Haleakala, Hawaii, captured its first views of the sky. It is intended exclusively for use by students in the United Kingdom and Hawaii. In early 2004, Australian students will be able to use its sister facility, Faulkes Telescope South, at Siding Spring Observatory in New South Wales.

TTL, a subsidiary company of JMU, is finishing two other instruments, including a 2.4-meter reflector for China's Yunnan Astronomical Observatory. Although no other contracts have come in, says TTL's Chris Moss, "We've had serious interest from around the world."

Moss also explains that the educational aspects have already paid off. During a test of how data would be distributed to schools and analyzed, students discovered four novae within the spiral galaxy M81.