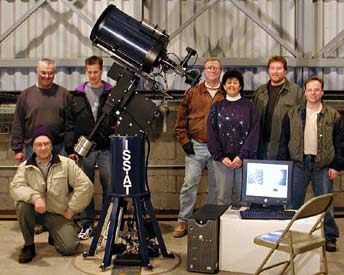 Amateur astronomers dream of someday controlling their own orbiting telescope, and last weekend that ambitious dream moved one step closer to reality. On February 2nd the Astronomical League unveiled the prototype for its "International Space Station Amateur Telescope" (ISS-AT) at Winer Observatory. Located in Sonoita, Arizona, about 50 miles southeast of Tucson, this testbed consists of a Meade 12-inch telescope on a Paramount GT-1100S mount, coupled via a flip-mirror system to two SBIG digital CCD cameras. "The turn-on was 90 percent successful," reports project manager Orville Brettman, "and it would have been 100 percent were it not for three straight days of rain."

Although members of the ISS-AT team and other well-wishers were present for Saturday's kickoff, in practice no one will be around when "Telescope Alpha" swings into action. Instead, it is linked via computer to Dyer Observatory on the campus of Vanderbilt University in Tennessee. Initially, astronomers at Dyer will control the telescope remotely, but soon it will be available to students worldwide via the Internet. The ISS-AT team plans to solicit observing proposals, and those accepted will be placed in queue for the remotely controlled telescope to execute. Results will then be posted on the ISS-AT Web site.

"Telescope Alpha" is only the first step in a much more ambitious plan. The League hopes to convince NASA to attach a telescope 14 to 16 inches in aperture to the International Space Station sometime between 2008 and 2010. Controlled remotely by a team of amateurs on the ground, the envisioned telescope would concentrate on "taking pictures of the universe that interest the whole human race," notes imaging expert Richard Berry, who is coordinating efforts to gain NASA's approval. "All of the images and data from the ISS-AT would be available for use in the classroom and as a basis for observing proposals from educators and their classes."

So far, the response to the idea from NASA and Boeing (the ISS's main contractor) has been enthusiastic. A number of corporate sponsors — among them Apogee Inc., Dell Computers, and Santa Barbara Instrument Group — have stepped forward to donate equipment and software. Last July, League president Charles E. Allen III and Brettman discussed the ISS-AT concept with Louis A. Mayo, an official in the space-science operations office at the NASA/Goddard Space Flight Center. Mayo is active in a NASA-sponsored program called Telescopes in Education, and he hopes to piggyback an additional small telescope with ISS-AT to relay hydrogen-alpha views of the Sun to classrooms.