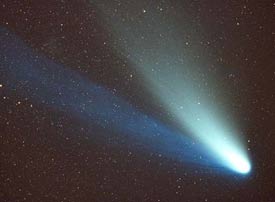 According to recent studies, 99 percent of all Oort cloud comets, like Comet Hale-Bopp seen here, break apart into debris. Sky & Telescope's Dennis di Cicco obtained this view on the morning of March 17, 1997 from a dark-sky site south of Boston, Massachusetts. He used an 8-inch f/1.5 Schmidt camera.

Comets come in two flavors: those that originate from the Kuiper Belt about 30 to 60 astronomical units away, and the nearly isotropic comets (NICs) that come from the far more distant Oort Cloud more than 10,000 a.u. away. Oort Cloud comets fly through the inner solar system at a rate of about a dozen per year. However, what becomes of these icy bodies once they stop producing their easy-to-spot gas comas and tails has remained somewhat of a mystery.

Assuming Oort Cloud comets eventually go dormant, the solar system should be brimming with burnt-out objects that have run out of the frozen gases that make them glow. Comets from the Kuiper Belt do often settle into asteroid-like cinders. But whether Oort Cloud objects undergo a similar fate was uncertain. If Oort Cloud comets evolve to cinders, search programs such as the Lincoln Laboratory Near Earth Asteroid Research project (LINEAR) should have uncovered truckloads of the spent bodies. But they simply aren't there.

A new study published in last week's Science assigns a grim fate to these dormant passersby. According to Harold F. Levison (Southwest Research Institute, Boulder) and his colleagues, 99 percent of the Oort cloud bodies that come to our solar system disrupt and dissolve into dust.

Why they disrupt remains somewhat of a mystery. One hypothesis proposed by Levison in his Science paper is that the comets undergo a thermal shock and internal-gas pressure buildup when they enter our relatively warm solar system having come from the coldest reaches of interstellar space. Another possibility is that the Oort Cloud objects are simply structurally weaker than Kuiper Belt comets.