The Central European Deep Sky Imaging Conference (CEDIC) brings together astrophotographers from around the globe every other year in March. This year, the historic city of Linz, Austria, hosted the event. Linz is also the home to some of the country’s most accomplished amateur astronomers. The second CEDIC was held last March 18-20 with more than150 participants from 20 countries, including lecturers from South and North America, as well as the Middle East. 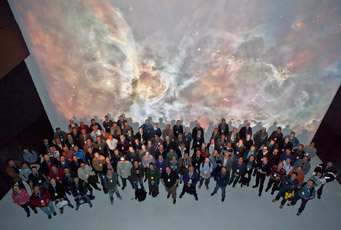 Participants gather for a group photo at CEDIC 2011. Click on the image for a larger view.

CEDIC is hosted by one of the most creative modern museums in Europe. The Ars Electronica Center is known for its Deep Space hall, where images in very high resolution are projected on 16-by-18-m screen that extends from the wall to the ground, and visitors can walk into crystal sharp images while surrounded by the starry cosmos, or enjoy amazing 3D shows. This unique hall was used for CEDIC opening to showcase a collection of stunning deep sky photos by the participants, as well as a large-screen display of The World at Night (TWAN) photographs. The museum will be the venue for the first completely digital TWAN exhibition this coming September.

While TWAN-style photography is very different from deep-sky imagery, CEDIC organizers intended to include all aspects of astrophotography to broaden the audience of this well-planned conference. I was invited to hold a workshop on secrets of landscape astrophotography. 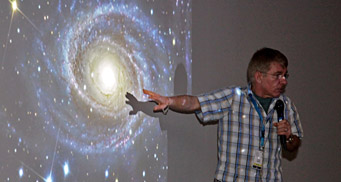 Leading deep-sky photographer R. Jay GaBany’s presentation “Rivers of Stars” filled the hall with participants. His deep photos of galaxies look for streams of stars in the faint outer halos of galaxies, a result of gravitational interactions. His secrets on how to achieve such deep images by modest size telescopes was the topic of another workshop.

Other interesting lectures were “Assembling Deep-Sky Mosaics” by Fabian Neyer of Switzerland, as well as “Remote Imaging versus Telescope Hugging” by Daniel Verschatse who relocated from Belgium to Chile to permanently enjoy the dark skies of the southern hemisphere. 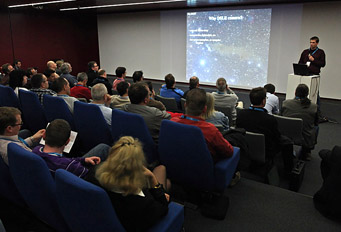 While CCDs are widely considered the essential camera used to capture cutting-edge deep sky astrophotos, Ivan Eder of Hungary discussed tips and methods on how to take high-quality deep-sky photos using off-the-shelf DSLR cameras. He argued that the quantum efficiency of new DSLRs are comparable to that of specialized CCD cameras. While DSLRs are more portable and easier to use, they are limited to exposures of few minutes due to noise and pixel-saturation issues.

The solution is stacking many short exposures to achieve a high signal-to-noise ratio, allowing further enhancement. Using a fast Newtonian astrograph and a modified DSLR camera ( the camera’s standard infrared-blocking filter was replaced by an astronomically-enhanced equivalent), he achieves many awe-inspiring results of nebulae, galaxies, and star clusters.

Today, many deep sky photographers with heavy duty equipment are limited to light polluted skies. Finnish Astrophotographer Jukka-Pekka Metsävainio discussed the challenges of narrowband imaging from light-polluted locations to reveal some of the faintest emission nebulae in the sky. In his presentation he explained some of his innovative image-processing techniques. 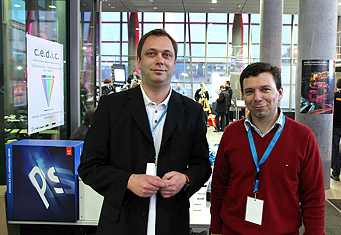 Astrophotographers Christoph Kaltseis(left) and Bernhard Hubl, two of the organizers of CEDIC 2011.

There were also talks about selecting the best sites for imaging and astronomical observing. In his talk “Chasing the Perfect Sky” Yuri Beletsky, an astronomer at the European Southern Observatory on Cerro Paranal in Chile, explained the various factors of seeing and transparency of the sky. Using large telescopes and high-resolution cameras, many astrophotographers seek out superior locations in their quest to reveal the fine details of the night sky.

Not all have access to such ideal sites that are often selected for research observatories. Filippo Ciferri of Italy explained how to to beat atmospheric turbulence using a technique known as “lucky imaging”. Common among planetary imagers, lucky imaging uses video imaging of deep-sky targets. The sharpest frames captured during transient moments of perfect seeing are then selected and stacked with amazing results.

Babak Tafreshi is a contributing photographer of Sky&Telescope, a science journalist, and director of The World at Night night-sky photography program.