The Mars rover Opportunity examined layered sedimentary rocks, such as these in 'Burns Cliff,' only to discover that they seem richer in sulfates than the expected carbonates.

Ask any Mars expert what great mysteries still surround the red planet, and you are likely to hear about the "missing carbonates."

As the story goes, when Mars was very young the planet was warm and liquid water flowed across its surface. Mars also had a thick atmosphere rich in carbon dioxide (CO2), just like ancient Earth. But on Earth, most of the early CO2 atmosphere dissolved into the oceans and formed carbonate rocks, such as limestone. In fact so much carbonate was locked up this way that, if you released all the carbon dioxide trapped in Earth's rocks today, we'd have a mostly-CO2 atmosphere 62 times as massive as the atmosphere we do — much like Venus today, which is too hot for liquid water to exist and hence retains a massive CO2 blanket.

So if the red planet and blue planet were so similar as children, why isn't the adult Mars full of carbonates like the adult Earth is? Thus far, geologists have yet to find nore than small amounts of carbonates on the Martian surface.

Maybe Mars geologists have been thinking about the problem the wrong way. Perhaps the carbonates aren't missing after all. This week, at the meeting of the American Astronomical Society’s Division of Planetary Sciences in Cambridge, England, Jeffrey M. Moore (NASA/Ames Research Center) made the radical suggestion that carbonates never had a chance to form on Mars in the first place. 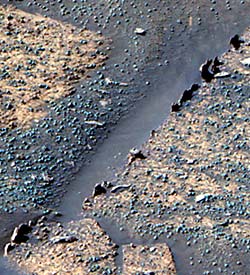 This false-color image from Opportunity's panoramic camera shows 'razorbacks' poking above the underlying sulfate-rich rock (shown yellow). The ridges may have formed when liquid water flowed through fissures in the rock and deposited minerals, forming veins of hard material more resistant to erosion.

When Mars was young it was filled with active volcanoes spewing vast amounts of sulfur compounds into the air. The sulfur combined with hydrogen and oxygen to create sulfuric acid, which rained onto the surface. Sulfur dissolves out of air before carbon does, says Moore, so the atmosphere would be rid of most of its sulfur before any carbonates could form. And on a world covered by sulfuric acid, conditions were far too harsh for carbonate rocks to survive. Put a drop of acid on limestone and the rock will sizzle and start to dissolve.

By the time most of the sulfur was out of the air and Mars was ready to support carbonate formation, Moore explains, it was too late. The atmosphere was mostly gone, Mars was cold and dry, and the once-abundant oceans had permanently frozen. As a result, there are no massive limestone layers and no carbonate boulders to be seen. The trace bits of carbonates that did manage to form were soon eroded to dust.

This story folds nicely into what scientists have recently learned from NASA's Mars Exploration Rovers. The rocks around the Opportunity landing site in Meridiani Planum are very rich in sulfate salts that must have formed in a very acidic environment. Sulfate-rich rocks are also seen in Gusev Crater, home to Spirit.

But that is only circumstantial evidence. How do you test whether this picture of Mars's early history is correct?

Moore's colleague Mark A. Bullock (Southwest Research Institute, Colorado) notes that the answer might come from the mineral jarosite (potassium iron sulfate hydroxide), which was found by Opportunity. Jarosite forms only in extremely acidic water, and by understanding the mineral's distribution across the planet, says Bullock, we'll have a better idea of the acidity conditions on ancient Mars. Moreover, Moore and Bullock plan laboratory experiments to simulate ancient Martian conditions in an effort to recreate the sulfate deposits such as the ones the rovers are finding.