The Red Planet We Never Knew 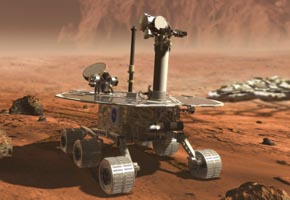 Last night I watched Roving Mars on Blu-ray DVD. It was an IMAX movie that I never got to see in the theater, because it curiously wasn't showing in the Boston area (despite several museums and furniture stores having IMAX theaters). The program was good, especially the animations in high-definition. The famous launch-and-landing sequence was re-rendered to include the actual Marsscapes where Spirit and Opportunity bounced to a stop.

The disc includes an interesting bonus feature: the hour-long Mars and Beyond, Disney's 1957 TV program about astronomy and space travel that (eventually) highlighted what was then known about pre–Space-Age Mars — which wasn't much. It was rather trippy with animated versions of all the life that could be on Mars (plants that move! or eat each other! or eat themselves!). The factual portions about Mars were explained by Lowell Observatory's Vesto Slipher. Rocket scientist Werhner von Braun makes a silent appearance too. The program ended with the preview of next week's Disneyland show about horses and cattle ranching, and there was an ad for the upcoming release of Old Yeller. Ah, those were the days of simple television.

Roving Mars and especially the bonus features are worth a look. Put it at the top of your Netflix queue.