Big telescopes cost big money, and governments often have other priorities. So it's a good thing that the world has wealthy folks willing to help make astronomical discoveries a reality. Today the Gordon and Betty Moore Foundation donated another $15 million toward the Thirty-Meter Telescope project. This is in addition to the $35 million the Moore Foundation previously gave to the TMT. In case you're wondering, Gordon Moore was the cofounder of Intel. 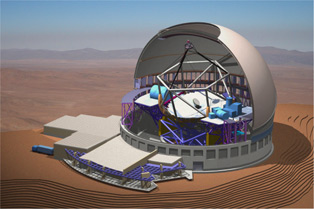 The Thirty-Meter Telescope Project is closer to reality thanks to another major donation from the Gordon and Betty Moore Foundation.

The TMT is brought to you by the Caltech / University of California partnership, the same group that made Keck Observatory happen. This time the Association of Canadian Universities for Research in Astronomy joins the club. The new grants add to the $64 million (including the Moore Foundation's previous $35 million) planned for the design-development phase of the TMT project.

"This new award from the Moore Foundation will enable us to reach construction readiness, and will also initiate industrial production capabilities for the primary segments of the telescope," said project manager Gary Sanders in a Caltech press release.

Although the two 10-meter Kecks will soon lose their crown as the largest scopes on Earth (barely), the plan is for TMT to claim the title in a huge way. Its primary mirror will consist of 492 individually controlled hexagonal segments that combine to make a 30-meter-wide reflective surface. A multi-laser-guidestar adaptive optics system will be built in from the ground up. Site selection is scheduled for May 2008; locations in Chile, Hawaii, and Mexico are on the short list. Telescope operations are planned to begin around 2016.