All of us here at Sky & Telescope are proud of our magazine's longevity. We have been the leading journal for amateur astronomers since our first issue was published in November, 1941. Last year we celebrated our forthcoming anniversary by publishing the Complete Sky & Telescope Seven Decade Collection, an electronic compendium of every issue ever published up to and including 2009. 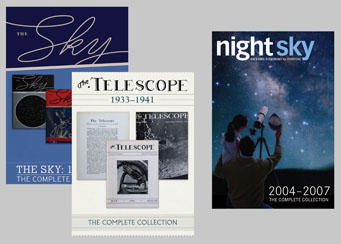 But Sky & Telescope is actually older than that. We were created by the merger of two separate magazines: The Sky and The Telescope. Complete collections of these magazines are also now available as DVD-ROMs. Ever wonder what was happening in the hobby before World War II? Here's your chance to find out!

And there's more. Night Sky, our bimonthly magazine for beginners, was published from 2004 to 2007. It had a small but fiercely devoted readership, which was unfortunately not quite big enough to justify the cost of printing the magazine. Even now, four years later, we get about one letter every month begging us to start publishing Night Sky again.

That's not likely to happen soon, but we've done second best: made all 18 back issues of Night Sky available on a DVD-ROM. Want to learn the constellations? Learn how to buy and use a telescope? Find easy targets to view? There's no better source than Night Sky.

The Sky
The Telescope
Night Sky

You can also buy individual issues of each magazine — as well as Sky & Telescope — as PDF downloads. We apologize for the current disorganization of this page, and expect to have an easier lookup mechanism for back issues available very soon.

Here's a fourth great old magazine I'd love to see put on DVD: Popular Astronomy (1893-1951), published at Carleton College in Northfield, Minnesota. It would be great if Sky & Telescope / New Track Media took the lead on making available this great historical resource.