Chang'e 2, a Chinese spacecraft that was orbiting the Moon 18 months ago, has wowed space-watchers around the world by returning detailed images of asteroid 4179 Toutatis taken during a close-in, high-speed flyby.

Confucius actually never said "A picture is worth a thousand words," but that well-known proverb's Chinese attribution (even if unfounded) is ringing true today. That's because we're getting our first looks at asteroid 4179 Toutatis as seen at close range by the Chang'e 2 spacecraft, which flew past the little asteroid two days ago. And those few images say a lot about what this potentially hazardous near-Earth object is all about. 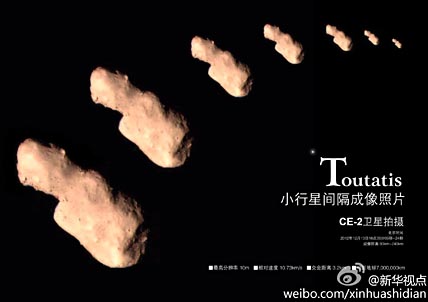 Launched on October 1, 2010, Chang'e 2 orbited the Moon for 8 months before being redirected last year to the L2 Lagrange point, roughly a million miles on the side of Earth opposite the Sun. But when it left L2 last April, Western observers suspected the spacecraft was heading deeper into interplanetary space. It didn't take long to realize that Chang'e 2 was bound for Toutatis.

This asteroid has been tumbling past Earth the past few days, and astronomers have used their big radar guns in California and Puerto Rico to create detailed radar maps of its lumpy, highly elongated surface. (Check out this short video of radar results, which are described more fully here.)

Measuring about 3 miles (4½ km) long, Toutatis is pretty clearly a loosely bound mash-up of two or more smaller bodies, a notion that's been amply confirmed by Chang'e 2. The spacecraft views, revealed in this report on Chinese television, show that the double-lobed asteroid has a relatively smooth surface with muted craters and scattered clusters of boulders. These views suggest that the surface is blanketed by a fair amount of loose dust. Presumably later versions will be more detailed and color-corrected. 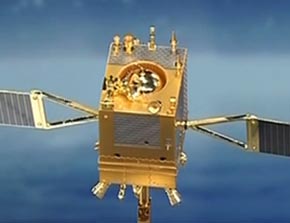 As seen in this model, Chang'e 2 is a box-shaped spacecraft with large solar-cell panels. With a mass of about 2½ tons, it was launched in 2010 and spent the first 8 months of its mission in lunar orbit. The craft is named for a Moon goddess in Chinese folklore.

The Chinese Lunar Exploration Program has never been big on giving out detailed information, even after the fact, so it's great to get these early looks at the Toutatis results. Chang'e 2 has a science payload virtually identical to that of its predecessor, Chang'e 1. On board are an imaging spectrometer, gamma- and X-ray spectrometers, laser altimeter, and other instruments. Whether any of those were turned on during the flyby has not been released to the news media.

But we do know that the images sequence seen here was from a small secondary imager mounted on the boxy craft's side, essentially a 1-megapixel webcam with a CMOS detector, that was included to make sure that the spacecraft's solar-cell arrays deployed properly. An interview with Zhou Jianliang, one of the mission's architects, suggests that the camera has a field of view of 7.2° and that it recorded five frames per second for the 100 seconds near closest approach. (I don't speak Chinese, but I found this hour-long special report full of interesting graphics and other insights.)

Even if no other instruments were used, Chang'e 2 might be able to provide a crucial chapter to the Toutatis story. We don't know if flight controllers intended to have such a close flyby, but such a close brush raises the possibility that tracking data collected before and afterward can be used to determine how much Chang'e 2's trajectory was altered by Toutatis and, from that, derive some limits on the asteroid's mass. Knowing the mass and the overall volume (from radar sounding and the flyby images) would yield Toutatis's overall density — key to understanding its bulk composition and internal makeup.

Jon Giorgini, a deep-space dynamicist at the Jet Propulsion Laboratory, thinks pre- and post-flyby tracking could indeed yield a mass estimate. "However, getting a mass would depend on the nature and precision of the Chinese tracking data," he cautions. "Those might not be usable here even if made available." 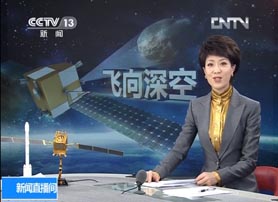 The successful flyby of Chang'e 2 past asteroid Toutatis on December 13, 2012, garnered extensive coverage by Chinese news media. This is from an hour-long special broadcast two days after the flyby.

NASA's Deep Space Network of tracking dishes was not assisting the Chinese, but the Goldstone station's radar system was illuminating the asteroid — and the spacecraft — during part of the flyby. "Our radar signal was not optimized for detecting an object so small," Giorgini explains, but he adds that the Goldstone data are being checked for an echo from Chang'e 2.

In any case, hearty congratulations are in order. China now joins the U.S., U.S.S.R., Europe, and Japan as nations that have successfully conducted an encounter in interplanetary space.

Dear Kelly,
Using L2 as a staging point for an examination of near-Earth asteroids is absolutely brilliant. One might even put a space station, big telescopes and a refueling depot there. Manned missions from L2 might also be possible once NASA has its heavy lift rocket (or a private heavy lift rocket). Avoiding the gravity well of the Moon (as an intermediate staging area) would marshall resources if they had to come directly from Earth.
Best Regards,
Hadyn Butler

I always thought A picture is worth a thousand words is a corruption of this proverb, but I guess not.

Anyways, the probe still have about 30 m/s worth of delta-v budget left. Wonder that the next mission is.

This appears to me to be one image of the asteroid, reduced in size 6 times. There is no rotation. Look at the VERY BRIGHT crater at the top. and the distinctive 90* notch in the bottom left is the same in each iteration.

@ TomT
The comment with the picture says the distance was 240 to 93 km which gives 147 km covered in the images. Speed was 10,7 km/s. Total time covered in the image was 147 / 10,7 = 13,7 seconds.
It just doesn't spin that fast. Compare the 2 largest images and you will find differences due to the changing position of the spacecraft.

Thanks for the heads up! Caught a series of images last night - 20 sec exposures with a Celestron 8: