New work might explain one of the cosmic conundrum's two mysteries. 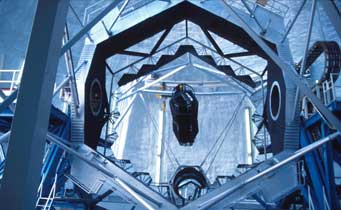 The 10-meter primary mirror of the Keck I telescope on Mauna Kea in Hawaii.

If the universe had a Facebook page, its relationship status would be "It's complicated" with the element lithium. After the Big Bang, subatomic particles combined to form hydrogen, helium, and trace amounts of lithium. But while observation and theory match up on the resulting levels of hydrogen and helium in the cosmos, two lithium isotopes, lithium-6 and lithium-7, are off.

Studies of primitive stars suggest that lithium-7, the heavier form, is at most one-third as common as it should be. On the other hand, lithium-6 shouldn’t be detectable at all in such stars — yet anomalies in spectral observations hint that its level is 200 times higher than it should be.

A new study in the June Astronomy & Astrophysics might help solve the lithium-6 question. Karin Lind (University of Cambridge, UK) and her colleagues observed four ancient stars in the Milky Way’s halo using the Keck I telescope on Mauna Kea. Observations of two of these stars had previously indicated abnormal levels of lithium-6.

But there’s a catch to those measurements: determining how much of the isotope is present depends on the method astronomers use to analyze how radiation is transferred through stars’ atmospheres. Researchers often simplify things by assuming that the radiation at any given point in the atmosphere only depend on the temperature right there, explains J. Christopher Howk (University of Notre Dame), whose team also works on the lithium problem. But in fact the radiation is a mix of photons produced locally and ones from elsewhere, especially from deeper down.

That’s a much harder calculation nut to crack, and doing so has only recently become feasible. Lind’s team decided to do it. The astronomers’ new analysis found no evidence for a high lithium-6 level; instead, the signatures once suspected of being from that isotope likely arose from the oversimplified method.

Howk says the results look pretty solid. “There was always a worry in the community that subtle effects like the ones described by Lind et al. could explain the earlier results,” he says. But while the new study seems to clear up the lithium-6 issue, it doesn’t do much to alleviate the looming lithium-7 problem. That tension, he says, still exists.

The universe has no problem it is what it is and has what it has. It is really our imperfect understanding that creates the problem.

Alan, your comment reminds me of the former “Missing Solar Neutrino Problem” Like this “looming lithium-7 problem” the neutrinos detected coming from the sun’s core were only 1/3rd of predictions. Then it was discerned that neutrinos oscillate between their three flavors and the “problem” disappeared.