An object designated 2011 QF11 is the first known Trojan body sharing the orbit of Uranus.

Our solar system's major planets can be variously grouped into "haves" and "have nots." For example, none of the inner planets have rings, though all the outer ones do. Innermost Venus and Mercury are the only two that lack moons, likely having lost them to the Sun's gravitational grip. Mars and Venus lack magnetic fields, and so on.

One of the odder discriminants involves Trojans, small bodies that share a planet's "personal space" by maintaining a location 60° ahead of or behind it in the same orbit. These locations, known as the L4 and L5 Lagrange points, are gravitationally stable niches where small bodies can congregate. 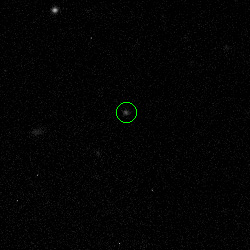 One of three discovery images of the object 2011 QF99 (inside green circle) taken 1 hour apart on October 24, 2011, with the Canada-France-Hawaii Telescope. Click on the image for a larger view.

Jupiter has a vast retinue of Trojan companions, 5,887 of them at last count. By some estimates, its two big Trojan clouds are more populous than the main asteroid belt. Neptune has nine, though in theory it should have 10 times more large Trojans than Jupiter does. Earth has one (the object 2010 TK7, discovered in 2010), along with a handful of unstable "quasi-satellites". Mars has eight Trojans.

By contrast, dynamicists believe that the trapping regions of Saturn and Uranus aren't stable. Yet a team led by Mike Alexandersen (University of British Columbia) has discovered a body, designated 2011 QF99, preceding Uranus near the L4 point.

The observers were conducting a deep, wide-field survey for trans-Neptunian objects with the 3.6-meter Canada-France-Hawaii Telescope on Mauna Kea, Hawaii. Initially they thought they'd chanced upon something drifting randomly among the outer planets, one of many such mavericks known as Centaurs. However, as detailed in the August 30th issue of Science, its motion over 14 months showed that 2011 QF99 was more than that. 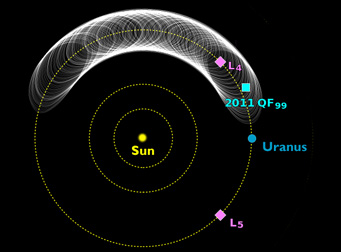 A simulation shows the orbital motion of 2011 QF99, relative to Uranus, over the next 59,000 years. L4 and L5 are gravitationally stable Lagrange points.

Computer simulations suggest that the object, estimated to be 40 miles (60 km) across, is keeping Uranus company only temporarily. The planet likely captured 2011 QF99 within the astronomically recent past, perhaps less than 100,000 years ago, and the object will gradually spiral its way out of the planet's gravitational grip within the next million years or so. Here's a video showing how its orbit evolves over time.

Their interest piqued, Alexandersen and his team then explored how often these temporary coorbital couplings occur. Their modeling led to a surprising result: far more bodies within 34 astronomical units of the Sun should be lingering as Trojans of Uranus and Neptune than anyone had imaged. At any given time, about 1% of them are temporarily bound to Uranus and another 2% to Neptune.

"This tells us something about the current evolution of the solar system," Alexandersen notes in a UBC press release. These come-and-go captives offer a window on how the giant planets interacted with a vast population of small bodies in the early solar system and migrated to their present locations.

Great video of what is going on. It’s fascinating that neither the Neptune-moving view (left hand side) nor the Neptune-stationary view (RHS) alone really capture what is happening. Like the wave-particle duality in QM, both perspectives are required to grasp the whole of it.

Solar Flares Aren't What They Seemed