NASA's Dawn spacecraft has found splashes of very bright and very dark material on the second-largest asteroid that are puzzling to mission scientists.

Today marks the 205th anniversary of the discovery of 4 Vesta by Heinrich Wilhelm Matthäus Olbers. It was the fourth body discovered in what we now call the asteroid belt. In Roman mythology, Vesta is the goddess of home and hearth.

In recent months this little world, 330 miles (550 km) across, has been "home" for NASA's Dawn orbiter. The spacecraft arrived last July, first easing into a wide survey orbit and then dropping into a high-altitude mapping orbit (dubbed HAMO by the Dawn team) to allow detailed reconnaissance by its three instruments: its German-built Framing Camera, with a 150-mm focal length and seven color filters; a Gamma Ray and Neutron Detector (GRaND), to determine surface chemistry; and a visible and infrared mapping spectrometer (VIR), built in Italy, whose wavelength coverage out to 5 microns explores both the composition and thermal properties of surface materials. 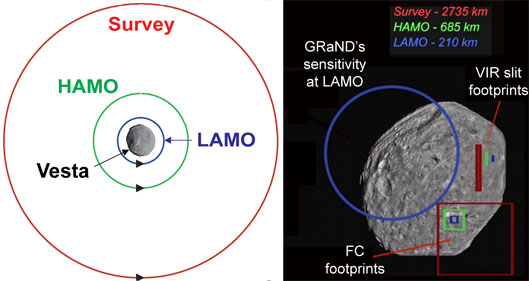 Right now Vesta is spinning with its south pole pointed toward the Sun, which means that much of the northern hemisphere is in shadow and unobservable. But a plus — a big plus — is that a huge basin centered on Vesta's south pole remains constantly in view. Named Rheasilvia, after the mythological vestal virgin and mother of Romulus and Remus, this gigantic gouge spans 90% of the asteroid's diameter and had been seen in images by the Hubble Space Telescope.

At a meeting of planetary scientists earlier this month, mission scientists ticked off Dawn's many findings to date. For example, Rheasilvia appears to have formed atop another, even larger basin, and these two big whack created sets of deep grooves that gird Vesta's equatorial region. Many of the ubiquitous craters — some fresh, others ancient — reveal layering in the surface thought to be stacks of debris tossed out by a succession of impacts over time. 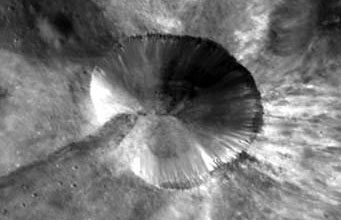 Bright material extends out from the Vesta crater Canuleia, which is 6miles (10 km) across). The bright material appears to have been thrown out of the crater during the impact that created it.

But some of Dawn's findings have mission scientists scratching their collective heads. For example, the surface composition is basaltic, meaning that early in its history Vesta must have been hot enough to flood much of the surface with volcanic flows. Yet, as Ralf Jaumann (DLR Institute of Planetary Research) explains, "Direct evidence for volcanic activity is lacking so far." Perhaps the eruptions came and went early in Vesta's history, only to be pounded to pieces by later impacts, or the flows' sources might be hidden in the northern shadows.

Here's another puzzle: Vesta was already notable for being one of the most reflective objects in the solar system. Yet Dawn has identified some spots nearly twice as bright as others. "Our analysis finds this bright material originates from Vesta and has undergone little change since the formation of Vesta over 4 billion years ago," notes Jian-Yang Li (University of Maryland) in a NASA press release.

Elsewhere, images reveal mysterious dark splotches that are often, but not always, associated with impact craters. The small, well-defined deposits are especially evident in infrared views. 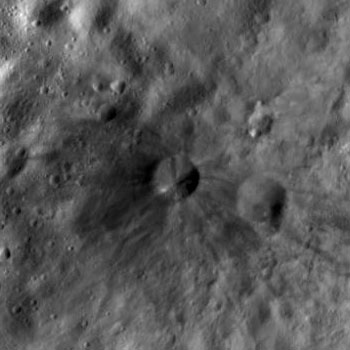 Aricia Tholus is a small dome-like mountain on Vesta that's topped by a small crater about 1 mile (2 km) across. Dark rays extend from the summit for more than 6 miles (10 km) in all directions.

So what is this mysterious dark material? It could be remnants of ancient volcanic flows or perhaps splashes of dark glass created during impact events.

According to spectroscopist Thomas McCord (Bear Flight Institute), one tantalizing idea is that the dark patches have been imported. "Surely, dark material from carbonaceous chondrite-rich objects, especially from the outer parts of the asteroid belt and perhaps from comets, must strike Vesta’s surface," McCord explains. Out in the asteroid belt, collision speeds would be lower, possibly preserving much of the impactors' original composition. These same slow speeds argue against the dark areas being splashes of material melted during each impact.

Some compositional clues might come from Dawn in the coming months. last December, flight controllers dropped the spacecraft into a low-altitude mapping orbit (LAMO) that on average keeps it just 130 miles (210 km) above Vesta's surface. This is great for determining Vesta's gravity field and its interior structure, and for using GRaND to deduce the abundances of specific elements in its surface rocks. Of course, being closer also permits high-resolution imaging and recording spectra of ever small patches of the asteroid's surface.

Alas, all good things must come to an end. In July, Dawn will bid Vesta adieu. After firing up its xenon-fueled ion thrusters, the spacecraft will set a course for its second and even larger destination, the giant asteroid 1 Ceres. Arrival there is planned for February 2015.

The DAWN team is doing a great job gathering data to understand Vesta in greater and greater detail. And the craft will be leaving for Ceres soon. Robotic spacecraft are much better than human space missions. Human beings would not be able to spend years getting from Earth to other places in the solar system, or months patiently examining one asteroid at a time. How many robots like Cassini, DAWN, MESSENGER, Juno, and New Horizons could be launched for the cost of one human mission to the Moon?

Seeing that the Asteroid Belt - and Vesta in particular - is likely what remains of a former planet that was split into smithereens, I don't see why a volcano on Vesta could not be a representative example of surviving surface features of that former planet...

Wouldn't such surface features be likely to still remain on some few surfaces of some of the larger fragments of that former planet?

Thanks, Steve... noted and fixed. 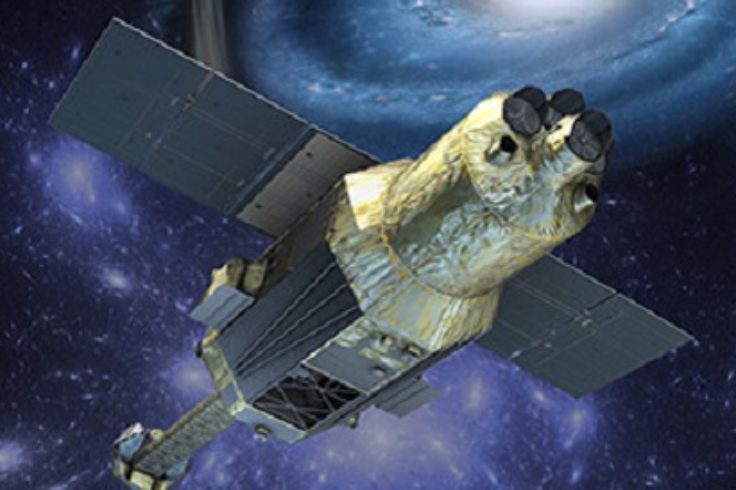