We're kinda proud here right now. J. Kelly Beatty, a Sky & Telescope editor since 1974 (and who writes many of the news stories in this space), today received the first Jonathan Eberhart Planetary Sciences Journalism Award at the annual meeting of the of the Division for Planetary Sciences (DPS) of the American Astronomical Society (AAS). 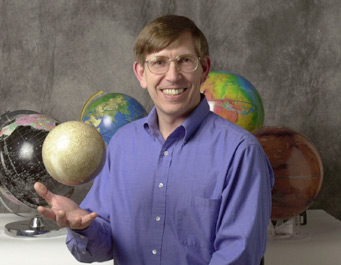 J. Kelly Beatty with one of the planet globes be brought to S&T's product line.

Kelly has been S&T's solar-system specialist for longer than some of our staffers have been alive. He received the award for his article “Reunion with Mercury,” the cover story of the May 2008 issue, but there's a lot of history behind that. Kelly has written more than 100 feature-length articles for us and countless shorter news reports. His work has also appeared in many newspapers, he's a frequent astronomy explicator on radio and TV, he's principal author of the acclaimed textbook The New Solar System, and he's very active in light-pollution control both here in the Boston area and as a board member of the International Dark-Sky Association. Among other things.

This is Beatty’s second award from the DPS. In 2005 he won the Harold Masursky Award for Meritorious Service to Planetary Science. And, earlier this year, the American Geophysical Union gave him its 2009 Robert C. Cowen Award for Sustained Achievement in Science Journalism. 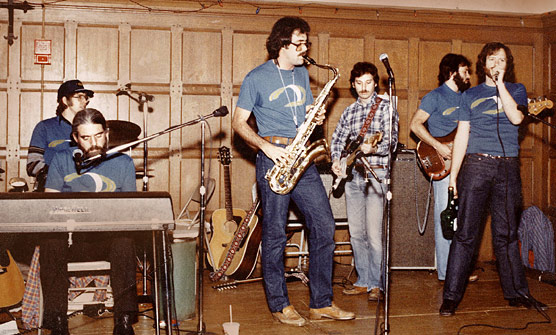 Kelly (drummer, left rear) performing in 1981 with the Titan Equatorial Band, "a ragtag group of scientists and science writers," he says. The late Jonathan Eberhart, for whom the award was named, is on keyboard.

I have more than a passing interest in planetary geology : see

Congratulations to Kelly for the recognition of his excellent reporting and interpretations of some of the hype coming out of NASA. You can always rely on Kelly to put things in a truly scientific perspective...