We Are the Astronomers Who Say NEAF!

The Northeast Astronomy Forum in Suffern, NY, welcomed visitors from across the United States on April 20-21, 2013. 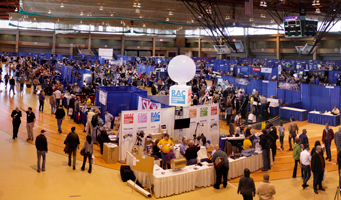 The 2013 NEAF was well attended, with 110+ exhibitors and vendors inside and a crowded solar star party outside, as well as an excellent series of lectures and workshops.

The editors and staff of Sky & Telescope made the annual pilgrimage to Suffern, NY, this past weekend to attend the Northeast Astronomy Forum, a show where enthusiasts can see some of the latest and greatest astronomy equipment. There’s something for every amateur: telescopes, lenses, gadgets, astrophotos, finely carved lens boxes, and kid’s crafts and activities.

This year’s show was in fine form, well attended with more than 110 vendors and exhibitors and lots of exciting new products. The forum included a series of workshops and lectures by renowned speakers such as former astronaut and current NASA administrator John Grunsfeld, as well as S&T’s own Tony Flanders and Alan MacRobert. The Sun even cooperated with the NEAF solar star party and attracted lots of viewers to the courtyard.

“I really enjoy attending NEAF every year because it gives us the chance to talk one-on-one with hundreds of readers,” says S&T Editor in Chief Robert Naeye. “This year was no exception.”

“We got lots of positive feedback about our magazine and website, and several very good suggestions for topics of future articles. We were also gratified to see so much interest in our new Moon globes, and our upcoming new Mars topography globe.”

Senior editor Alan MacRobert agrees. “My hours at the S&T booth on Saturday sped right by, what with all the interesting people who came to talk, look over our books and atlases, and share their stories — from newbies to some who had been reading S&T for decades.” 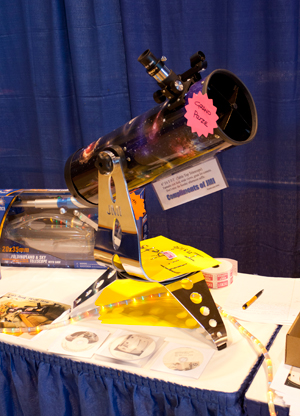 The grand prize of the kids”™ raffle made even the adults envious: a 6-inch f/4 chrome-plated telescope donated by JMI.

NEAF always includes events for children, including planetarium shows and a Children’s Corner, where kids can learn about astronomy and build rockets out of soda bottles. Imaging editor Sean Walker notes there seemed to be more children this year than at previous shows — a reassuring trend for the future of amateur astronomy. The free telescope give-aways should help inspire a few of the lucky ones. The grand prize of the kids’ raffle made even the adults envious: a 6-inch f/4 chrome-plated telescope donated by JMI.

Encountering like-minded folks, old and young, is part of the fun. Contributing editor Kelly Beatty was helping out at the S&T booth when he met a man and his young son, Pete, who came up to admire the Moon globes.

“As we chatted, it became clear that it was young Pete who had an interest in astronomy,” Beatty said. “Dad said, ‘We have a telescope, but it's only been out a few times because we really don't know how to use it.’” Beatty asked where they lived, thinking he could steer them toward a local astronomy club. “Lo and behold, they lived in my town! Now we plan to get together soon, so I can tune up their scope and help Pete kindle his love of the night sky.”

“I want to congratulate all the good folks in the Rockland Astronomy Club, and all the volunteers, who did a fabulous job of organizing and running NEAF,” says Naeye. “The speakers were great, the special events were great, and everything seemed to go perfectly smoothly. Organizing an event of this size involves an enormous amount of work. If there were any problems or snafus, they were completely transparent from my perspective.”