What Happened to the Flags On The Moon?

While we recently celebrated the 43rd anniversary of the Apollo 11 lunar landing, there are still many asking what happened to the flags on the moon. Those of a "certain age" (yours truly included) recall exactly where they were when Neil Armstrong and "Buzz" Aldrin descended onto the Sea of Tranquility and placed their flags. 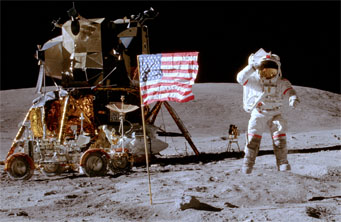 Apollo 16 astronaut John Young jumps for joy as he salutes an American flag that he and crewmate Charlie Duke erected soon after landing. Behind him are the lunar module Orion and a Lunar Roving Vehicle (LRV).

Among the many Kodak moments from that mission, Armstrong and Aldrin promptly erected an American flag near the descent module Eagle. The deploying of the Lunar Flag Assembly, as it was known officially, would be repeated by each subsequent pair of moonwalkers.

Over the years, many have wondered what became of those historic banners. NASA officials never intended for the 5-by-3-foot nylon flags to last indefinitely. In fact, they didn't really have a plan for the flag-raising until about three months before Apollo 11's launch. As recounted in NASA Contractor Report 188251, the historic flag was purchased, literally, off the shelf for $5.50 at a local Sears store.

What Happened to the Flags on The Moon?

Aldrin reported seeing Apollo 11's moon flag blown down by rocket exhaust as he and Armstrong blasted off the lunar surface, but it's taken sharp-eyed detective work by Mark Robinson and his Lunar Reconnaissance Orbiter Camera team to learn the fate of that one and all the others. With a resolution of just 1.6 feet (0.5 meter) per pixel, LROC's twin narrow-angle cameras were up to the task of recording the landing sites in remarkable detail. "I get flag-picture questions all the time," Robinson tells me, and the cameras record one or two Apollo sites every month as part of what he calls "cartography sanity checks". 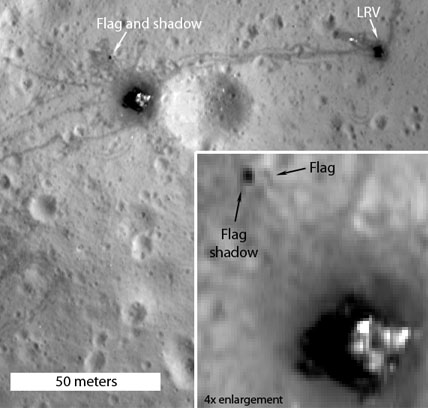 "Bird's-eye" view of the Apollo 16 landing site, as recorded by a high-resolution camera on NASA's Lunar Reconnaissance Orbiter. The spacecraft was angled15Â° toward the Sun, which revealed the shadowed side of the flag.

Because they've been exposed to 40 years of harsh, unfiltered sunlight and space radiation, Apollo's flags should now be pure white, their colorful stars and stripes having bleached out completely. In any case, LROC images show that the banners are still standing at five of the landing sites — and even Apollo 11's can be made out lying in the lunar dust. (The fact that they've whitened over time actually makes them easier to spot.)

LRO flies over these locations at various times of the lunar day, so its cameras sometimes record both the flags and their shadows. Moreover, the viewing angle isn't necessarily straight down: on occasion the LROC team has angled the spacecraft's view toward the illuminated sides of flags. So Robinson has assembled all of the LROC images for each Apollo landing site and created a series of digital "flip books" that show each scene with various lighting angles. "A Day at the Apollo 12 Landing Site" was just completed and posted on Friday.

Y'know, during the Apollo 12 mission, astronauts "Pete" Conrad and Alan Bean visited Surveyor 3 and returned to Earth with key parts taken from that robotic lander. So I wonder: will some future robotic lunar rover turn the tables and return a moon flag erected by one of the Apollo crews?

So these flags are standard off-the-shelf nylon? I had been told they were metal foil, accounting for the crinkled look when unrolled. Was that just the effect of cold on nylon? Now, for their likely being bleached to a pure white, I can hardly wait for the wingnuts and conspiracy buffs to start howling about "NASA's shameful surrender" and lack of patriotism for flying a white flag! Wanna bet many of them are landing-hoaxers in their spare time?

I remember the moon walk and Neil Armstrong's historic words: "That's one small step for man, one giant leap for mankind." Apparently, he actually meant to say One small step for "A" man, but dropped his lines. I guess that's why he naver had a great career on Broadway.

Anyway, I was sitting in my parents upstairs bedroom watching this on TV. I was only 12 when the walk took place, so I was allowed to stay up late to watch it.

It truly IS awesome. Fascinating and amazing. Yeah, Phil, I was gonna say: now, do you think that THIS is gonna hush up all of our moon-landing-having-been-fake conspirators? I think not.

I hope the Apollo flags will be left on the Moon, hopefully with small plaques marking their historical significance.

The whole of our Year 12 in Victoria were allowed to watch the live telecast on our "Form Room" TV. It is something I will never forget. Perhaps dropping the 'a' was Neil's way of identifying with all mankind. They did it for all of us. It should inspire us to believe that we can do whatever we set our collective minds to. Can we still achieve greatness? You bet!

Kelly, please don't forget about all the young astronomy enthusiasts out there who may know something about skygazing or the space missions of the past decades! I'm a recent high school graduate and have been interested in astronomy since about the age of three, and first started reading sky & telescope around age fourteen.

Kelly, please don't forget about all the young astronomy enthusiasts out there who may know something about skygazing or the space missions of the past decades! I'm a recent high school graduate and have been interested in astronomy since about the age of three, and first started reading sky & telescope around age fourteen.