This week our solar system has nine planets. Next week, if astronomers approve a new definition of the word "planet," there will be 12 — with more to come. Newcomers to the list include Ceres, the largest asteroid; Charon, Pluto's largest moon; and 2003 UB313, an icy body more than twice as far from the Sun as Pluto and a little bigger (and not yet graced with an official name). 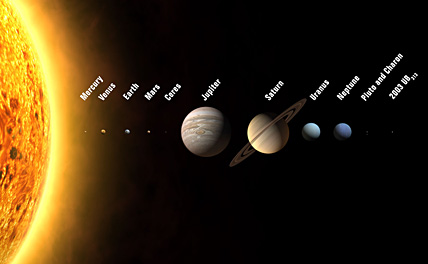 If the International Astronomical Union approves a proposed new definition of the word "planet," our solar system will include at least 12 of them, including the formerly minor planet Ceres, Pluto's moon Charon, and the soon-to-be-renamed (thankfully) 2003 UB313.

Astronomers got their first look at the proposed definition this morning in Prague, Czech Republic, where some 2,500 researchers from 75 countries have gathered for the triennial general assembly of the International Astronomical Union (IAU), the arbiter of solar-system nomenclature since its inception in 1919. Here's the actual wording: "A planet is a celestial body that (a) has sufficient mass for its self-gravity to overcome rigid-body forces so that it assumes a hydrostatic equilibrium (nearly round) shape, and (b) is in orbit around a star, and is neither a star nor a satellite of a planet."

The new scheme includes eight so-called classical planets: Mercury, Venus, Earth, Mars, Jupiter, Saturn, Uranus, and Neptune. These are large objects in nearly circular orbits close to the ecliptic plane (that is, the plane of Earth's orbit). Planets smaller than Mercury — including Ceres, Pluto, Charon, and 2003 UB313 — are collectively referred to as dwarf planets. Pluto becomes the prototype of a new class of planets called plutons, small objects with orbital periods longer than 200 years and highly elongated paths tipped steeply with respect to the ecliptic.

If you're already getting confused, especially about Charon, perhaps this footnote will help: "For two or more objects comprising a multiple-object system, the primary object is designated a planet if it independently satisfies the conditions above. A secondary object satisfying these conditions is also designated a planet if the system barycenter [center of mass] resides outside the primary. Secondary objects not satisfying these criteria are 'satellites.' Under this definition, Pluto's companion Charon is a planet, making Pluto-Charon a double planet" with two tiny moons, Nix and Hydra, discovered last year. Pluto-Charon is the only known pair in the solar system whose center of mass lies in free space between the two objects. Even though some moons are bigger than some planets (for example, Jupiter's Ganymede and Saturn's Titan), they're still just satellites, not planets, because the center of mass of the system lies within the parent planet. 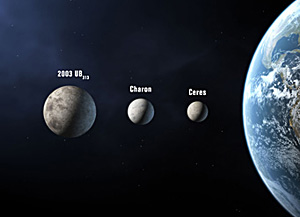 The proposed new planets 2003 UB313, Charon, and Ceres are much smaller than Earth (seen an right), but still massive enough for gravity to pul them into spherical shapes.

Objects that don't qualify as planets or satellites would all be designated "small solar-system bodies," including asteroids, comets, and the myriad small Kuiper Belt objects orbiting beyond Neptune. Asteroids would no longer be called "minor planets," because they're not planets according to the new definition.

Surprising as it may seem, astronomers have never adopted a formal definition of the word "planet." They had no need for one; "everybody just knew" what a planet was. In ancient times, planets were "wandering stars" that moved with respect to the fixed stars of the constellations. With the advent of the telescope in the 1600s, planets became large, round objects orbiting the Sun. Ceres and other asteroids were considered planets upon their discovery in the early 1800s but were soon downgraded to asteroids when it became clear that they were a distinct population of small objects.

Pluto might have met the same fate, but for decades after its discovery in 1930, it was the only object of its type known in the outer solar system. Since the early 1990s, more than 1,000 icy worlds have been found in the Kuiper Belt, some of them rivaling — or, in the case of 2003 UB313, exceeding — Pluto in size. If Pluto's a planet, are all these objects planets too? This question is what prompted the IAU to try to come up with a formal definition of the word "planet." After a panel of 19 planetary scientists deadlocked, IAU president Ron Ekers appointed a smaller committee led by astronomer-historian Owen Gingerich (Harvard-Smithsonian Center for Astrophysics). According to committee member Richard P. Binzel (MIT), "Our goal was to find a scientific basis for a new definition of 'planet,' and we chose gravity as the determining factor."

One decided disadvantage of the proposed definition is that it cannot be applied immediately upon the discovery of a new object in the solar system. Not until enough data are gathered to establish an object's mass and size will it be possible to establish whether it's round enough to qualify as a planet. In an essay published in the IAU meeting's daily newspaper yesterday, planetary scientist Tom Gehrels (University of Arizona) suggested that it would be simpler if the definition was based on a body's intrinsic brightness, which can be determined quickly from its apparent brightness and distance. "Considering roundness due to gravitational stability is complex, time consuming, subject to change, and impossible due to faintness at great distance," wrote Gehrels. Michael Brown (Caltech), codiscoverer of 2003 UB313, argues similarly on his Web site, where he also worries that having potentially dozens of planets in our solar system might make sense to astronomers but will be confusing to everyone else.

Attendees at the IAU meeting will debate the Gingerich committee's proposal this week and next, then vote whether to accept it on Thursday, August 24th. Lots more information is available on the IAU meeting's news site.