What's Going on Inside Enceladus?

When William Herschel discovered a sixth moon of Saturn in 1789, he named it Enceladus, after one of the Gigantes in Greek mythology. These enormous children of Gaia had, among other things, long serpentlike lower limbs. 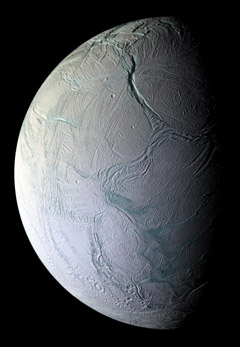 Enceladus is a weird little world. Averaging just 313 miles (504 km) across, it sports pronounced ridges and cracks — such as 1-km-deep Labtayt Sulci above center. Tenuous icy geysers are jetting from a series of "tiger stripes," the bluish streaks near the terminator below center in this false-color composite. Click on the image for a larger view, or click here for the full-resolution version.

Herschel couldn't have picked a better name, because his 21st-century counterparts have discovered that Enceladus really does possess bizarre lower limbs, figuratively speaking. In 2005 NASA's Cassini spacecraft spotted a series of powerful geysers near the moon's south pole that are spewing water vapor and water-ice crystals hundreds of miles into space.

That discovery solved one mystery — we finally knew the source of the particles in Saturn's tenuous E ring. But it spawned another: how could an ice ball no larger than the British Isles be so active? What's going on inside Enceladus to make it spout off?

A team of Cassini investigators, led by Carolyn Porco (Space Science Institute), laid out their case in a detailed article published three years ago in Science. (Running nine pages, it's one of the longest articles I've seen in that journal before or since.)

Porco and her colleagues explain that an orbital resonance with nearby Dione causes tidal friction within Enceladus that generates more than 1015 ergs per second. (And how much energy is that? I ran the numbers: it's the equivalent of more than 100,000 hair dryers blasting away simultaneously!)

The strength of this resonance, together with the heat flowing out of Enceladus, probably mean that there's liquid water somewhere beneath the moon's icy exterior. So is that subsurface sea the source of the geysers? 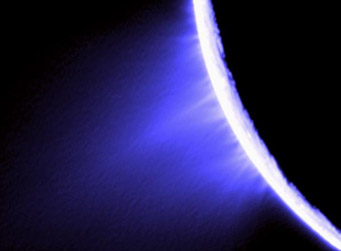 A false-color view of geysers jetting from near the south pole of Enceladus, as recorded by Cassini in 2005.

In their analysis, the Cassini researchers estimate that the jets contain a ratio of ice particles to gas was about 0.4 by mass, and from this they deduce that the jets must be powered by a boiling subsurface reservoir of liquid water that is jetting gas hundreds of miles into the vacuum of space. The escape hatches appear to be along enigmatic south-polar cracks dubbed "tiger stripes."

However, at a recent meeting of planetary scientists in Houston, Texas, geologist Susan Kieffer (University of Illinois at Urbana-Champaign) and three colleagues asserted that the Cassini team had miscalculated the ice-vapor mass ratio in the geyers and that it's really more like 0.2. The discrepancy seems small, but Kieffer argues that it has significant implications for the "Cold Faithful" interpretation.

Specifically, the lowered ratio means that liquid water isn't needed to explain the geysers. Rather, Kieffer has championed a deep-seated source involving the rapid decomposition of clathrates, chemical compounds that bind water and more volatile molecules like methane, carbon dioxide, or nitrogen. Tidal heating within Enceladus would cause the clathrates to sublimate directly into gas and ice.

Who's correct, I wondered? After the meeting I engaged Porco, Kieffer, and atmospheric specialist Andrew Ingersoll (Caltech) in some four-way email tag. Here's the gist of our exchanges: 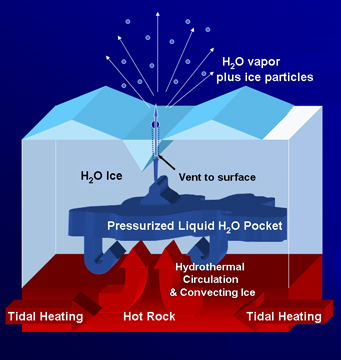 Some scientists believe that tidal heating within Enceladus has created pockets of briny liquid water, which can escape to space as strong vapor-driven jets through fractures in the surface.

Kieffer: "The purpose wasn't to advocate sublimation per se, but to point out that if the right number had been used [for the ice/vapor ratio in the plumes], sublimation would never have been ruled out and the debate would be more evenly balanced now."

Porco: "The analysis of the ice/vapor [ratio] was pretty straightforward, and, yes, we had to make assumptions about the particle size distribution because we didn't have enough measurements... The point was, the ice and vapor abundances weren't several factors of 10 or 100 different."

Ingersoll: "I think the I/V ratio, given its large uncertainty, provides no compelling criterion in either direction. With my models I can match all the plume data, either with ice or liquid reservoirs, just by adjusting the width and shape of the channels. So I am an agnostic on the big question."

Kieffer: "Please note that we did not use the recalculated I-V ratio to advocate for sublimation over boiling, only to point out that, as Andy says, there is no compelling criterion toward water in the ratio."

Porco: "OK. Maybe the ice/vapor ratio does not, at this time, favor a liquid-water reservoir, but there are other observations that do. A big step forward in this regard is going to be the publication of a
paper … sometime soon by the [Cosmic Dust Analyzer] people on Cassini. Stay tuned for that." (Note that Cassini made four close-range flybys of Enceladus last year.)

Folks, there in a nutshell is how science really works. You make observations, you form a hypothesis to explain them, others test your assumptions, and the collective thinking changes as warranted.

More fodder for this discussion should come in a few weeks, when scientists will gather for a special session on Enceladus at a meeting of geophysicists in Toronto. A trio of theorists will assert that a subsurface ocean, if it exists, must be a temporary phenomenon. Another team finds very little sodium (presumably from salts) in the plumes' vapor, a strike against a subsurface ocean as their source.

And let's not forget that the icy moon hasn't seen the last of Cassini. The spacecraft will fly through the tenuous plumes on November 2nd, skirting just 62 miles (99 km) above those tiger stripes on the surface below!

Read more about this enigmatic moon — and its equally odd siblings Iapetus and Rhea — in the just-out June issue of Sky & Telescope.

This report raises a question about Enceladus and if the activity observed indicates a more recent origin vs. 4.5 billion years old solar system. Enceladus since 2005 is known to have geyser activity. A number of models indicate the moon should be frozen solid after 4.5 billion years and the activity <= 30 million years old so Enceladus has geologic activity <= 1% the age of the solar system. The giant gas planets radiate more energy than they receive from the Sun. Jupiter radiates almost twice as much than it receives from the Sun, some models suggest this is <= 1 % of the age of the solar system. The Galileo mission to Jupiter confirmed that Io has at least 80 active volcanoes operating today on its surface. Galileo revealed that Ioâs surface is young <= 1 million years old. More recent reviews of the Galileo mission data show that if Io has been erupting over 4.5 billion years at 10% of its current rate, Io would have erupted its entire mass 40 times (Io would be recycled 40 times, inside out). Io could be a young moon. Interesting reports continue at the gas giant planets and their moons.

Tidal forces alone I think would be enough to keep there objects from freezing solid even after billions of years. (And as this article mentions liquid water isn't necessary to explain the geysers anyway).

KC, what makes these moons old? Certainly not what is observed taking place today. Radiometric dating of meteorites for example (4.5/4.6 billion years) does not establish that Jupiter completed some 379 million revolutions around the Sun; neither does it show these moons have been in orbit for millions of revolutions.