Why Do We Call Them "Asteroids"?

A 211-year-old mystery has finally been solved by an astronomy historian, who's identified the person responsible for naming those rocky objects orbiting between Mars and Jupiter.

The first years of the 19th century were glorious ones for astronomy. In 1800 William Herschel, already famous for spotting Uranus in 1781, found that the Sun emits infrared energy. The next year Johann Ritter followed with the discovery of ultraviolet light. 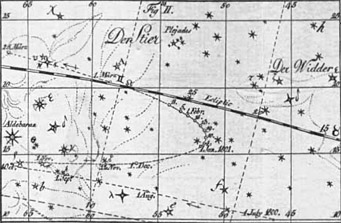 In 1802, Johann Bode published this chart showing where Ceres (curved path) had tracked through western Taurus near the time of its discovery.

Meanwhile, Europe's scientific circles were abuzz about the realization that not one but two planet-like objects were orbiting the Sun between Mars and Jupiter. Astronomers had suspected as much — after all, the numerical orbit spacings produced by the Titius-Bode Law had predicted that a planet should be lurking there.

In fact, a dozen astronomers, handpicked by Baron Franz Xaver von Zach and nicknamed the "Celestial Police," were readying to search for this undiscovered world when, on January 1, 1801, Giuseppe Piazzi spotted the long-sought interloper using a small refractor atop the royal palace in Palermo, Italy. At first, Piazzi thought he'd found a comet, but it later proved to be Ceres. A second body in that same region, Pallas was found on March 28, 1802.

But neither was truly a planet. Herschel used a special projection system to estimate that Ceres was only 162 miles (260 km) across and Pallas just 147 miles (237 km). 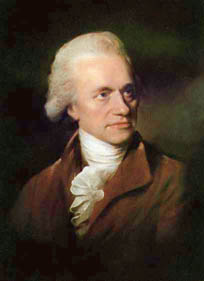 William Herschel proposed in 1802 that newly found Ceres and Pallas should be called "asteroids" — but he didn't coin the term. Lemuel Francis Abbott painted this famous portrait in 1785, four years after Herschel discovered Uranus.

So what were they? Herschel has long been credited with coining the term asteroids, derived from a Greek word meaning "starlike," because he introduced the term at a meeting of London's Royal Society in May 1802 and later published it in the Society's Philosophical Transactions.

But according to astronomy historian Clifford Cunningham (National Astronomical Research Institute of Thailand), "Asteroid was Herschel's choice, but it was not his creation." Documents found by Cunningham in Yale's Beinecke Rare Book and Manuscript Library show that credit instead goes to a little-known Greek specialist named Charles Burney Jr.

As Cunningham learned, Herschel was casting about for a suitable name for the new bodies and had reached out to Dr. Charles Burney Sr, a close friend and colleague. Burney in turn quickly wrote to his son, who at the time was one of England's preeminent Greek scholars. The correspondence between them shows that the father had proffered suggestions like stellula (the diminutive of stella) before concluding, "It must not be a big name for so small a star."

The son's reply didn't turn up during Cunningham's research. What did, however, was a later letter from the senior Burney to Frances Crewe, discussing Herschel's just-published report about Ceres and Pallas in Philosophical Transactions. "They are not allowed by Herschel to be either Planets or Comets," Burney writes, "but asteroids, italick, a kind of star — a name [which] my son, the Grecian, furnished."

A portrait of Charles Burney Jr, painted in 1821 by William Sharp. A well-known Greek Scholar, Burney suggested that "asteroid" be used for the small bodies found orbiting between Mars and Jupiter.

Herschel chose asteroid over other contenders (such as planetkin, planeret, and planetling), but he wasn't thrilled with it. At one point he asked his close friend Sir Joseph Banks, then president of the Society, to come up with a better word. Banks, in turn, contacted Stephen Weston, who came up with the word aorate. "Herschel rejected this as well," Cunningham explains, "accepting asteroid as the best of a bad lot of ideas."

One problem is that Herschel's colleagues still thought of Ceres and Pallas as planets, so a new moniker simply wasn't needed. "The abuse heaped on Herschel for introducing the word asteroid was unparalleled in the history of astronomy," Cunningham says. "It was not just a rejection — it was outrage, ridicule and contempt." Only Wilhelm Olbers, who'd found Pallas, embraced Herschel's choice. Piazzi preferred planetoid, but by then Herschel's Royal Society paper had been published.

"It has taken me 30 years of research into Herschel and the asteroids to uncover this," notes Cunningham. (You can follow some of that quest in his 2001 book, The First Asteroid.) Cunningham presented his findings three weeks ago at a meeting of the American Astronomical Society's Division for Planetary Sciences.

Meanwhile, come February 2015 we'll know whether planetoid would have been the better choice. That's when NASA's Dawn spacecraft finally reaches Ceres (actually about 600 miles across) and begins several months of intense scrutiny of the asteroid belt's largest member.

Fascinating! Coining names was a rather different process two centuries ago --the inventors looked for Classical style and heritage as well as euphony in their creations. Of course, the name "asteroid" was a flop in part because astronomers and the astronomy-interested public preferred to think of these objects as planets. Never mind what Herschel says! Astronomy "textbooks" routinely counted off the "eleven principal planets" in the Solar System from Mercury through Mars, then listing Ceres, Pallas, Juno, and Vesta, and continuing with Jupiter, Saturn, and Herschel or "The Georgian" (not yet Uranus in most English-language texts). Herschel's attempt to re-classify the minor planets was as contrary to popular opinion as those attempting to re-classify Pluto (before the IAU's decision largely settled the matter). The term "asteroid" co-existed for many years, but it was only c.1855, with the explosion of minor planet discoveries, that the idea of listing these small worlds as "principal planets" was finally abandoned. Besides, the parades parties in Paris after each new "planet" discovery were starting to be weekly events.... Incidentally, for a bit of personal nostalgia, I had a letter published in the pages of S&T some years ago suggesting that this 19th century experience with "de-planetizing" Ceres and Vesta and the others might help people understand that there was a historical precedent for de-planetizing Pluto. Ceres is the largest representative of a whole class of objects. Pluto is ONE of the largest representatives of yet another whole class of objects That letter, by the way, was published waaay back in September of 1980.

My unique 'big data' analysis of of 30 million+ documents newly reveals that the German polymath Forster (FRS) published the work 'asteroid' in 1771 to name the chamomile plant. That is 30 years earlier than current knowledge would have it.

Moreover, Forster (FRS) was a fellow German and Royal Society fellow of Hershel (FRS). Most importantly Forster knew Banks very well, because Banks recommended him to be the naturalist aboard Cook's second Atlantic Voyage. Members of the Royal Society would have been most reluctant to have Forster cited as the coining originator of the word 'asteroid' because he incurred the wroth of the Admiralty by interdependently publishing his observations on Cooks expedition - against a strict ban. I hope that Clifford Cunningham can accommodate this new discovery into his most excellent and valuable work in this field.

The fully referenced details of Forster's apparent priority regarding coinage of the word 'asteroid' can be found here: http://www.bestthinking.com/thinkers/science/social_sciences/sociology/mike-sutton?tab=blog&blogpostid=22067

Thanks for this interesting report. And they say there's no value in studying Greek and Latin! I must admit, "planeret" rolls nicely off the tongue, much more euphoniously than "planetoid." But, while either of these words captures the relationship between these little bodies and the planets, "asteroid" describes how they look through a telescope. P.S. to Frank Reed -- I've had the same thought about the reclassification of the asteroids in the 19th century and Pluto in the early 21st, but you had me beat by 30 years! Well done!

"me three" on using the asteroid demotion as an example that these things happen in the progress of science, when discussing/debating the Pluto issue.

Now that we know who coined the word asteroid, maybe we can solve another mystery: Who coined the term "black hole"? It was not John Wheeler, as commonly thought. He says in his autobiography that it was first suggested to him by a member of the audience during a talk he gave in late 1967. And that unknown audience member did not invent it either, since it was used occasionally at least as early as December 1963, when, according to a report in the January 18, 1964 issue of Science News Letter, it was used at a session of the 130th annual AAAS meeting, in a session chaired by Hong-Yee Chiu. He is known to have coined the word "quasar" at about that time, and may have coined "black hole" as well. Or it may have been invented by one of the speakers at that session, A. G. W. Cameron, Charles Misner, Volker Weidemann, and J. B. Oke. Unlike the case of "asteroid," there may still be people alive who remember who coined the term "black hole." Can anyone tell me?

For Pluto I still like "planette". But confusingly it sounds to similar to 'planet'. 🙂

Good question. Why do we call them asteroids -- they never answer the phone.

I ran a 'big data' IDD analysis on 30 million+ publications and found that a Royal Society associate of both Herschel and Banks published the word 'asteroid' thirty years earlier in a book (Forster 1771) on north American botany to name the chamomile plant. Could it be that the term was lifted from his book without citation? Forster (FRS) was an outstanding ancient languages scholar and polymath. Forster (a Pole of Scottish descent) took Bank's place on Cook's second Atlantic voyage. He became despised among his Fellows at the Royal Society because he broke with his official agreement by independently publishing his Cook Voyage findings.

The fact that Forster knew Hershel and Banks, and was ostracized by the Royal Society, seems rather too much to be coincidence. More here: http://www.bestthinking.com/thinkers/science/social_sciences/sociology/mike-sutton?tab=blog&blogpostid=22067

I hope this information is useful and adds more historical background to Clifford Cunningham's excellent research into the history of science.