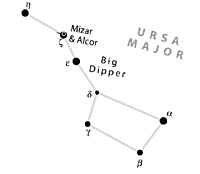 Stars within a constellation are usually lettered from Alpha (α) to Omega (ω) roughly in order of brightness, but there are numerous exceptions. For instance, the stars of the Big Dipper are lettered clockwise around the bowl and then out the handle.

Several hundred stars have names that sound like names, such as Sirius and Betelgeuse, but only 20 or 30 of these are in widespread use. Few astronomers recognize exotic star names like Pishpai and Dhur. Instead, most bright stars are known by the Greek letters assigned to them in Johann Bayer's 1603 star atlas, Uranometria. Thus, Betelgeuse is also called Alpha Orionis, the "A" star of the constellation Orion. Likewise, Sirius is Alpha Canis Majoris, the "A" star of Canis Major, and Pishpai is Mu Geminorum, the "M" star of Gemini.

Bayer letters are extremely handy, because instead of memorizing a thousand or so distinct names, you only need to learn the 24 letters of the Greek alphabet and the 88 constellation names and abbreviations. And unlike long-winded "traditional" names, Greek letters make tidy labels on star charts, as you can see at right.

The lowercase Greek letters (the ones used for stars) are listed below. Their precise appearance may vary depending on your computer's fonts. Also, at least two (theta and sigma) have alternate forms quite different from what's shown below.

To learn about the designations for fainter stars, read our article "Names of the Stars." Wikipedia has a good introduction to the history and linguistics of the Greek alphabet. And the full alphabet, both upper- and lowercase, is listed below. Uppercase Greek letters aren't used much in astronomy, but they're quite prevalent in science and mathematics — and they'll help you read street signs if you ever visit Greece!

The pronunciations below are according to the 4th edition of the American Heritage Dictionary, but the pseudo-phonetic spellings are our own. When in doubt, click on a pronunciation to hear what it really sounds like. Or you can listen to a recording of the entire alphabet. In case you're curious, most Americans pronounce beta as "bayta," most Englishmen say "beeta," modern Greeks say "vayta," and none of these is much like the ancient Greek pronuciation. As is so often the case, there isn't really a "correct" pronunciation.