You May Already Have a Supernova Detector 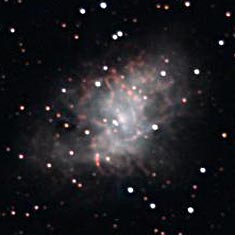 The Crab Nebula is the remnant of a Type II supernova explosion — the death of a massive star — observed in A.D. 1054. At its heart astronomers have found a highly magnetic, rapidly rotating neutron star. Called a pulsar, it is the collapsed core of the supernova's precursor. This CCD image was made by a group of amateur astronomers at the Pises Observatory in France.

An ordinary 35-millimeter camera is a very powerful tool for a supernova search. With a 50-mm f/2.8 lens and ISO 800 film, a 5-minute exposure reaches magnitude 11 and covers a field spanning 27° by 40°. With a 300-mm lens the limiting magnitude deepens to 15, but the field shrinks to 4½° by 6½°. The former setup will cover the most likely error box from the neutrino detectors — say a few hundred square degrees — while the 300-mm can do the same with about a dozen exposures. Light pollution and moonlight will reduce the magnitude limit of any photographic setup.

The problem with film is that processing it takes time, even if you have a one-hour lab around the corner that opens at 7 a.m. For an efficient search, a scanner is almost mandatory, not only to allow rapid comparisons with digital charts but also to permit quick transmission of the image.

On the other hand, CCDs automatically provide digital images, but they have very restricted fields of view. A typical CCD camera and 8-inch Schmidt-Cassegrain telescope (with a focal reducer to give f/3.3) covers a field of only about 0.2 square degree, but it can reach 18th magnitude with exposures under 10 minutes. CCDs are also less handicapped by a bright sky than are photographic emulsions. Yet the prospect of taking (and examining!) hundreds or thousands of images doesn't seem very attractive, to say the least! But if scores of CCD users each spend a few hours imaging random areas within the error box, complete coverage would likely take place during the first night.

A very effective compromise between wide fields and deep limiting magnitudes comes when a CCD is fitted to an ordinary camera lens. For example, a 135-mm f/2.8 lens attached to a Kodak KAF-0400 CCD (one of the most popular detectors in amateur cameras) will cover a 2°-by-3° field and reach 14th magnitude in 3 minutes.

So film and electronics complement each other beautifully. Any detector you have on hand can be brought into the search. No system is optimal, simply because no one can predict the brightness of the target or the size of the search area.

And whether you spot a candidate or not, save those images! When the position of the supernova becomes known, you can look at them again. Who knows — you might have captured a crucial moment in the star's death throes.