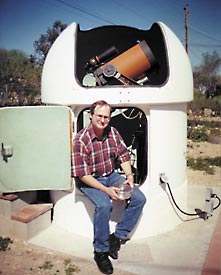 Roy Tucker at his Goodricke-Pigott Observatory in suburban Tucson, Arizona. He was selected as one of the winners of The Planetary Society's 2002 Shoemaker Near-Earth Object (NEO) Grant Program for his ongoing automated NEO survey project.

At the end of July, 2002, five amateur astronomers specializing in the study, observation, and early detection of Earth-crossing asteroids and comets received a financial boost from the Planetary Society. James McGaha (Tucson, Arizona), John Broughton (Reedy Creek, Queensland, Australia), Matt Dawson (Roeser, Luxembourg), Roy Tucker (Tucson, Arizona), and Richard Kowalski (Zephyrhills, Florida) were each awarded Shoemaker Near-Earth Object (NEO) Grants ranging from $900 to $10,000. The proposals were selected among 37 applications from 13 countries. Funds were allocated depending on the researchers' needs and expected results.

Established in 1997, the program is named in memory of American astrogeologist Eugene ("Gene") M. Shoemaker (1928-1997), who is best remembered for his study of impact craters and codiscovery of Comet Shoemaker-Levy 9. The program's goal is to "accelerate the NEO discovery rate, to improve and increase observations, and to encourage international cooperation in this field."

James McGaha was awarded $10,000 to install a computerized control system for the 24-inch f/5 Newtonian reflector at Grasslands Observatory, thereby improving the site's efficiency in finding and tracking NEOs.

John Broughton was given $8,140 to purchase an Apogee AP6Ep CCD camera, which will be coupled to a new computer-controlled 18.5-inch telescope for follow-up observations of NEOs from the Southern Hemisphere.

Matt Dawson, representing Roeser Observatory in Luxembourg and Cote de Meuse Observatory in France, was awarded $6,300 to acquire an Apogee AP47 CCD camera that will be used at both observatories, where he will be able to detect objects as faint as visual magnitude 21.

Roy Tucker received $2,950 to purchase software and computer equipment for his Goodricke-Pigott Observatory. His array of three identical 14-inch f/5 Newtonian reflectors equipped with homemade CCD cameras can produce up to a total of 1.5 gigabytes of image data per night — more than he can examine and measure singlehandedly. He will use the grant money to distribute the data among volunteer observers to assist him in the data reduction and analysis.

Richard Kowalski is the founder and moderator of the Minor Planet Mailing List (MPML), which serves as a public Internet link between NEO observers and professional researchers worldwide. The society awarded him a total of $900 to cover MPML's operating expenses for the next three years.

Including these awards, the society has given out grants four times, with prize money totaling more than $100,000. For more information on the next round of grant applications contact the Planetary Society at 626-793-5100, or visit its Web site.