A Chain of Galaxies Near M92 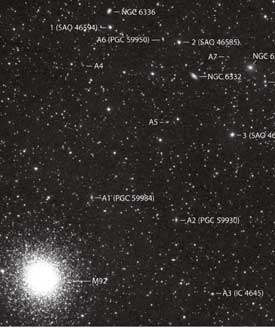 Based on an image from the Digitized Sky Survey, this chart will help observers hunt down a field of challenging galaxies northwest of M92. Click on the image for a complete view of this chart.

In the June 2001 issue of Sky & Telescope I wrote (in Deep-Sky Notebook) about a collection of challenging galaxies near the famous globular star cluster Messier 13. Now I want to drift north and east to the “other” globular in Hercules, Messier 92. To my eye this superb cluster presents an oddly angular look, as though several boxy clumps of stars are nested one inside the other. This appearance is best seen with magnifications between 200x and 300x.

These moderate to high magnifications are also good for hunting down a loose family of galaxies that extends from M92's periphery to a 7th-magnitude star, SAO 46565, located about 1° northwest of the cluster. The five brightest members of the family are plotted on chart 81 of Uranometria 2000.0 and chart 1135 of the Millennium Star Atlas (MSA).

My assault on this group took place in August and September (2000) from Mount Kobau in British Columbia's southern interior. Itching to work the ultra-black sky at this 6,000-foot site, I turned my 17½-inch Dobsonian reflector toward Hercules. The impressions described here are from observations made at 220x and 285x.

My initial scan of the region showed that NGC 6323 is easy to spot just 10' east of the 7th-magnitude star. The little galaxy looks nearly edge on, but because it is only 1’ long, you will have to use high magnification to see its form.

Moving your aim about 12' east-southeast of NGC 6323 will bring NGC 6329 into view. This elliptical galaxy is roughly 1' in diameter with a diffuse glow that's pierced by a dense core. Having the total light of a 12.8-magnitude star, this is the brightest galaxy in the area. By contrast, only 3' to its the southwest lurks NGC 6327, the faintest and smallest galaxy of the five. It's a mere dot, measuring only about ¼' across. This teensy size, however, keeps the light concentrated, and the object is easier to see than its cataloged magnitude 15 might suggest.

Just east of these galaxies, three 9th- and 10th-magnitude stars form a bent line nearly ½° long. They are SAO 46594, SAO 46585, and SAO 46580 and are labeled 1, 2, and 3, respectively, in the photograph above. I consider them a fence that divides our hunting ground in two. They are also helpful steppingstones to locating more galaxies.

For example, NGC 6332 lies about 9' east-southeast of NGC 6329 and floats about one-third of the way between stars 2 and 3. It is a 13th-magnitude bland oval about 1' in diameter, which gradually brightens toward the middle. My sense (which contradicts information in some catalogs) is that NGC 6332 appears almost as bright as NGC 6329, and about twice as big. Details aside, these galaxies are the dominant pair in this family of five.

The final member of the group is NGC 6336, a 13th-magnitude smudge 16' east-northeast of NGC 6332. It is easy to find since it lies less than 3’ north of star 1. However, the galaxy is only slightly elongated, with few distinguishing characteristics. 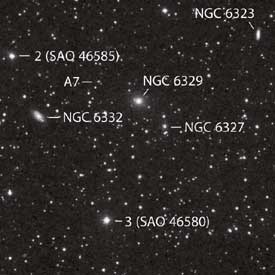 A Digitized Sky Survey view of several galaxies near M92 in Hercules that are mentioned in the article. Click on the image to see the entire chart.

On a separate night I tracked down eight “anonymous” galaxies. One is listed in the Index Catalogue (IC) and four others I later identified as being entries in the Lyon-Meudon Extragalactic Database (PGC). The eight are labeled on the accompanying image as A1 through A8. If you're ready to have a go at them, the following notes will help you at the eyepiece.

Other members of this collection are near the fence of stars mentioned earlier. A4, tiny and featureless, is located 6' south-southeast of star 1. A5 is a small, pale, edge-on specimen trapped inside an isosceles triangle of stars 8' south-southeast of NGC 6332. A6 (PGC 59950) is just 2' east of star 2. It boasts higher contrast and is more distinctly edge on than A5. A7 is located next to a pair of stars 5' northwest of NGC 6332. The galaxy itself is almost starlike. Last, A8 (PGC 91583) makes an equilateral triangle with NGC 6323 and 7th-magnitude SAO 46565 mentioned at the beginning of this column. A8 is hard to hold, even at high power.

Unspectacular stuff? Yes. But a satisfying moment came when I was able to capture the two galaxies closest to M92 (A1 and A2) juxtaposed against the radiant cluster, whose outskirts sprawled across the southeast edge of the field. This simple exercise provided the same perspective I described in my June 2001 article, about peering past the hulking M13 to the distant galaxy IC 4617.

Taking advantage of the Kobau blackness, I saw all five NGC galaxies with my 10-inch Dobsonian. The smallest, NGC 6327, is definitely a test for this aperture in perfect skies. Nevertheless, if you can locate NGC 6327, then several of the “anonymous” galaxies should be within reach. 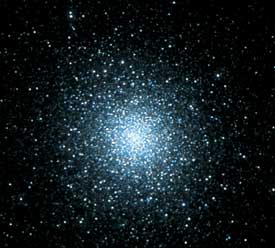 By any measure Messier 92 is among the finest globular star clusters visible from the Northern Hemisphere.

I was thrilled to have glimpsed A1 and A2 with the 10-inch and was able to verify the sighting with the 17½-inch scope.

The galaxy fields near M13 and M92 are fun to explore because they are easy to pinpoint, are manageable in size, and feature two or three levels of observational challenge. Best of all, if you fall short of your goal you can always drift back to the clusters. After straining to find 14th- and 15th-magnitude fuzzies, ogling M13 or M92 quickly reinforces the grandeur of these celestial chandeliers.