A Treasure-Trove of Variable Stars 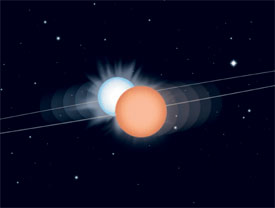 Each time one component of a binary-star system goes in front of or behind the other, a dip occurs in the total light we see.

At 18:10 Universal Time (UT) on June 14, 1992, a nondescript 9th-magnitude star in Cetus had already started to fade. Within 21 minutes it lost half its normal luster, but then in the next two hours it almost fully recovered. Astronomers were not expecting this behavior. In fact, no one saw it at all!

Despite the fact that this star lies just one binocular field west of the renowned variable star Mira, no Earthbound eyes were turned its way. The unusual fading was noticed years later, as scientists sifted through the many gigabytes of data transmitted back to Earth by the European Space Agency's Hipparcos satellite.

As Hipparcos project scientist Michael Perryman explained, more than 8,000 stars previously believed to be constant were found in the satellite's data to vary. Of these, 3,000 received official designations in time to be labeled in the Millennium Star Atlas, even though astronomers knew very little about them yet (and still don't). Their secrets are waiting to be unlocked by diligent observers with small backyard telescopes.

Click to see a comparison chart for UZ Volantis.

In the article "Mining Hipparcos’s Buried Treasure," Sky & Telescope presented a list of some of Hipparcos's "unsolved variables." Here is another. The 11 stars summarized in that article are well placed for viewing from various parts of the world on November and December evenings. The finder charts on these pages are just what observers need to detect the occasional dips in light that we already know take place.

Notes on These New Variables

Click to see a comparison chart for V1125 Tauri.

This list is more narrowly focused than the one in "Mining Hipparcos’s Buried Treasure," for all of these stars are tentatively classed in ESA's Hipparcos and Tycho Catalogues as eclipsing binaries — close, unresolved pairs in which one star circles another in an orbit nearly edge on to our view. Probably neither component varies by itself, but their combined brightness drops each time one passes in front of the other and blocks some or all of its light.

A few stars on this list may stay constant for months or years before exhibiting any telltale dip. The mere fact that no one noticed their variations in the past tells us so. The Hipparcos mission, which lasted from late 1989 through mid-1993, made only 30 to 380 measurements of any given star — not enough, in most cases, to produce a reliable light curve or establish the period unambiguously.

Click to see a comparison chart for DS Ceti.

Because their minima can't be predicted with certainty, the best approach is to get to know these stars and check up on them every clear night. Be prepared to keep this up for many months to come. You might become the first person to nail down a star's period so that more detailed studies of its behavior can begin.

Click to see a comparison chart for DG Ceti.

The individual brightness measurements Hipparcos made of these stars can be found on Hipparcos's website. There, an interactive utility even lets you "fold" the observations back on themselves to look for repetitive changes in brightness. Thanks to these benchmark data going back a decade now, any new minima observed by readers will lead to very accurate predictions in the future.

DG Ceti is the star described at the opening of this article. Aside from the minimum on June 14, 1992, Hipparcos caught another on July 13, 1991, and part of a third on August 9, 1990. These suggest that another dip may have occurred about November 5, 1999. But the 337.4-day interval on which this prediction is based may be a multiple of the true period, so the star should be checked on other nights as well. It has an 11th-magnitude companion 5.5" to the southeast that has nothing to do with the eclipses.

Click to see a comparison chart for AL Ariestis.

DS Ceti is presumably the 9.5-magnitude primary of the visual double star at the location given in the table; the 10th-magnitude companion lies 6.7" to the west.

AL Arietis, normally magnitude 9.2, was as faint as 9.8 in two measurements made near 19:40 UT on August 9, 1991. Unfortunately, the satellite observed this star on only 49 occasions during the mission and caught no other anomalies. All bets are off as to when it will dip again.

DP Camelopardalis had six apparent dimmings during the mission. But they don't seem commensurate, and only three were tagged as reliable by Hipparcos scientists. At 77 light-years from the Sun, this is the nearest of the binaries on our list.

Click to see a comparison chart for FU Eridani.

FU Eridani was a half magnitude dimmer than usual on two occasions.

V366 Puppis was faint on three occasions consistent with a 39.1-day period. This star, normally about magnitude 8.4, has a 10th-magnitude companion 7.2" to its south.

UZ Volantis is a south circumpolar star, observable from the Southern Hemisphere any night of the year, all night long.

Click to see a comparison chart for DP Camelo-pardalis.

The best tactic is to familiarize yourself with these stars and get in the habit of routinely checking up on them every clear night. Be prepared to maintain this vigil for many months to come. You might well be the first person to discover what makes one of these "unsolved variables" tick.

The techniques for making visual magnitude estimates are not very demanding. (For more detailed information, see "The Lure of Variable Stars.") Since the stars on the list (on the next page) are 8th to 10th magnitude, a 3- or 4-inch telescope is perfect for studying them. The larger the telescope the smaller the field of view, so you probably wouldn't want to use a big Dobsonian reflector on any of these stars. Visual-magnitude estimates are most reliable when the variable and comparison stars can be seen in the same field.

Click to see a comparison chart for V1366 Orionis.

Try to select comparison stars that bracket the variable star in brightness and have a similar color. The colors on our charts can serve as a guide, for they, like the magnitudes of the comparison stars, are derived from the Tycho photometry of the Hipparcos mission. The colors are more vivid than those you will see at night. As is customary, these charts give comparison-star magnitudes to the nearest tenth with the decimal point omitted. A star labeled "83" is magnitude 8.3 visually, for example.

Click to see a comparison chart for V366 Puppis.

Entering your magnitude estimates in a notebook may enable you to discover a star's eclipse cycle as well as rule out other, invalid periods. But this effort is wasted unless you follow accepted procedures, like those just described, and communicate your findings to others engaged in variable-star work.

You can share your results with professional astronomers and learn from more experienced observers by joining an organization like the American Association of Variable Star Observers. The benefits of membership include being in the pipeline to receive the AAVSO's Alert Notices and News Flashes of novae and other stars showing unusual activity, as well as the biannual Journal. Their website has links to other variable-star groups around the world.

Eclipsing binaries have played a crucial role in astronomers' understanding of the universe. For example, the revolution period revealed by eclipses can be compared to the radial velocities of the components determined by spectroscopy. This information often makes it possible to deduce the diameters, masses, and densities of the individual stars, even without necessarily knowing how far away they are.