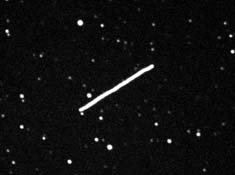 Asteroid 2002 NY40 sailed across 3 arcminutes of sky in Lyra (one-tenth of the Moon's apparent diameter) during this 30-second exposure made at 3:28 Universal Time on August 18, 2002. Hermes is another fast-moving target and will be a challenge for astro imagers.

After eluding astronomers for 66 years, the long-lost asteroid Hermes has finally been retrieved. This most famous of the "lost asteroids" was originally discovered by Karl Reinmuth at Heidelberg, Germany, on October 28, 1937, and tracked for only five days. Despite numerous attempts, the object that came to be known as Hermes was not seen again — until now.

Hermes was recovered on October 15th by Brian A. Skiff (Lowell Observatory Near-Earth Object Search, Arizona). Based on initial spectroscopy by Andrew S. Rivkin and Richard P. Binzel (MIT), the asteroid appears to be an S-type (stony) minor planet with an estimated diameter of about 1 kilometer.

In late October 2003, Hermes will be bright enough (magnitude 13) to be seen in 10-inch and larger amateur telescopes as it races westward across Cetus and Pisces. By month's end it will be moving 7° per day and gaining. Unlike the situation in 1937, when Hermes skimmed to within 800,000 km of our planet (two Earth-Moon distances), it will pass about nine times that far on November 4th, 2003.

The ephemeris below gives Hermes's right ascension and declination (equinox 2000.0) at 0 hours Universal Time on each date, its elongation angle from the Sun, visual magnitude, and the constellation through which it is passing.

Hermes circles the Sun once every 2.13 years in an orbit inclined 6° to the Earth's. Since 1937 it has traveled well beyond Mars's distance, then looped inside the orbit of Venus, 31 times.

Despite knowing details of the 1937 and 2003 encounters, astronomers at first had trouble accounting for Hermes's exact trajectory during the intervening 66 years. But on October 16th, Steven R. Chesley and Paul W. Chodas, using JPL's Sentry impact monitoring software, successfully modeled eight close approaches of Hermes to Earth and Venus, including an Earth approach in 1942 to within about 600,000 km — 1.6 times the average Earth-Moon distance. Their new orbital calculations also reveal that Hermes will not approach the Earth any closer than about 3 million km during the next 100 years.