The Latest on Betelgeuse, Plus a Bright Supernova and New Comet Iwamoto

The sky provides. This winter, the fading of Betelgeuse caught us all by surprise. Now, as January wraps up, we can add a new comet discovery and a supernova bright enough to see in a 6-inch telescope to an ever-growing list of seasonal sky wonders.

As astronomers turned their spectrographs toward Betelgeuse, skywatchers from beginners to seasoned amateurs thrilled to see the red supergiant fade before their eyes. With a little help from Aldebaran and Bellatrix, which served as comparison stars, Betelgeuse made hundreds if not thousands of new variable star observers.

I spoke with Elizabeth O. Waagen, senior technical assistant at the American Association of Variable Star Observers (AAVSO), and while she didn't have an exact number at her fingertips, she confirmed that Betelgeuse inspired new observers to contribute their magnitude estimates.

While there's always scatter in making magnitude estimates I was surprised how well novices did. From posts here and on Facebook most agreed that by late January Betelgeuse equaled Bellatrix, which shines at magnitude 1.6. That jibes with the most recent to-date Johnson V-band CCD observation of magnitude 1.64 made by AAVSO observer Tom Polakis on January 28.25 UT. For my part, I noted the star at magnitude 1.7 on January 27.1 UT, a hair fainter than Bellatrix.

In the most recent (January 29th) Astronomer's Telegram (#13410) concerning the star, astronomer Edward Guinan of Villanova University writes that during his 25 years of photometry, "Betelgeuse is currently the coolest and least luminous yet observed. Since September 2019, the star's temperature has decreased by ~100K while its luminosity has diminished by nearly 25%." The numbers imply an increase in the star's radius of ~9%. (UPDATE Feb. 5: According the latest ATEL #13439, the radius increase estimate is in error. Instead, Betelgeuse appears to have shrunk by ~9 percent since September 2019. I estimated its magnitude at 1.7 on Feb. 4.1 UT.)

Others have suggested that the extraordinary dimming may be due in par to expelled gas and dust clouds that partially obscure the star. Betelgeuse is highly unstable, routinely unleashing powerful stellar winds that collide and compress interstellar gas into a bow shock in the direction of the star's motion. If the supergiant's ~420-day variability period (UPDATE Feb. 5: now refined to 430 days) is an unusually deep one this time around then Guinan predicts the dimming trend will bottom out sometime now through early February (UPDATE Feb. 5: Minimum expected around Feb 21).

What's next? You tell me! Keep an eye on what used to be Orion's second brightest star and we'll soon find out. To see what Betelgeuse is up to anytime visit the AAVSO website. In the Pick a Star box, type Betelgeuse then either select Check Recent Observations or Plot a Light Curve. You can input your own parameters by selecting Plot Another Curve in the top left-hand corner. Int he dialog boxes, you can include all observations in every color band or choose specific types such as visual, red, or V-band, for example. You can also toggle between Julian and calendar dates, and under Preferences you can set your magnitude scale.

While we're on the topic of stars that might explode as supernovae one day, one of Japan's most prolific supernova hunters, Koichi Itagaki, nabbed a 15th-magnitude supernova on January 12th in the 10th-magnitude elliptical galaxy NGC 4636. The following night it shot up to 13th magnitude and currently shines around magnitude 12.1, bright enough to see in a 6-inch telescope. Dubbed 2020ue, it's located 5° north-northeast of the pretty double star Gamma (γ) Virginis in Virgo. The galaxy climbs to 20° by midnight and remains well-placed through dawn.

Unlike Betelgeuse, which will potentially become a Type II supernova, 2020ue is a Type Ia event involving the wholesale destruction of a white dwarf star in close orbit about a (typically) main-sequence star. After millennia of siphoning material from the companion to its surface, the dwarf puts on enough weight to exceed the Chandrasekhar Limit of 1.4 solar masses and undergoes uncontrolled gravitational collapse. Runaway fusion from the crushing heat and pressure races through the star, destroying it in a titanic blast visible across millions of light-years.

I took a look at this silent scene of destruction on January 21.4 UT and easily spotted the supernova at 64× at a comfortable distance from the galaxy's nucleus in my 15-inch reflector. It's currently about magnitude 12.1 and should remain easily accessible in a dark, moonless sky until the waxing gibbous Moon returns on February 7th.

Comet PanSTARRS (C/2017 T2) at magnitude 9.5 is currently the brightest comet of the night as it glides past the Perseus Double Cluster this week. Everything else is faint including a new magnitude-12.9 object discovered by Japanese amateur astronomer Masayuki Iwamoto. He used a 400mm f/4 lens and Canon EOS 6D camera to capture the critter on January 8th. Normally, I wouldn't include a comet this faint, but because an amateur found it and Comet Iwamoto (C/2020 A2) is brand new, an exception seemed warranted.

I set aside an hour before dawn on January 20th to track down the new object in Hercules. Despite glare from a pesky 10th-magnitude star I spotted Iwamoto with my 15-inch Dob using magnifications of 142× and 245×.

The comet appeared small, diffuse, and moderately condensed with a coma diameter of 1 arcminute. Because of its rapid northeastward movement I easily detected motion over the 45 minutes of observation. (UPDATE Feb. 5: The comet is brighter than the ephemeris indicates. I re-observed it on Feb. 5.48 UT at magnitude 10.5 with a diffuse 4′ coma. A Swan filter will enhance the view, and expand the coma's apparent size.)

C/2020 A2 is Iwamoto's fourth comet discovery. Perihelion occurred on January 8th with closest approach to the Earth on February 22nd at 0.92 a.u. The comet will brighten slightly in the coming weeks, perhaps reaching magnitude 12.5 by Valentine's Day, before fading. Watch for it to become circumpolar for mid-latitude skywatchers around the middle of February. What other surprises await by that date I wonder?

Bob, I was able to observe SN2020ue in NGC 4636 on the night of Jan 20/21 at Wagman Observatory. I estimated it to be 12.0 magnitude. I used 127X on the 21" to spot it. It was very easy to locate. Later that night, I spotted SN2020oi in M100 at 13.7 magnitude. It wasn't as easy to find as SN2020ue because of its magnitude and close proximity to the nucleus. I estimated it at 13.7 mag. I used 127X, 282X and 462X to confirm my observation. It brought back fond memories of the first SN that I observed, which happened to be in M100 and was discovered by fellow AAAP member, Gus Johnson in April of 1979. Gus became only the third visual observer to discover a Supernova. While I was battling the cold and frost, I hunted and located Asteroid #63, Ausonia in Cancer. It was 11 mag. It took me about a day to recover after observing for almost 3 hours in temperatures ranging from 14 to 10 degrees F. It was still not close to the coldest conditions that I ever experienced while observing Halley's Comet in March of 1986. It was -6 degrees F that morning.

Hi Tom,
Glad you spotted it, Tom. I also saw SN 2020oi in M100 about the same time and almost included it in the article, but it was ~13.5 was very difficult in my 15-inch so close to the nucleus. When this published today it had faded to the mid-14s, so I left it out.

I am very skeptical about the possibility that dimming of Betelgeuze may be a sign of explosion it as Supernova soon, of course. But... Few days ago I'm stumble upon this article: "Comments on the Progenitor of NGC 6946-BH1" ( https://iopscience.iop.org/article/10.3847/2515-5172/ab5191 ) about transient in NGC 6946 that could be a failed supernova due to the core-collapse of a yellow or red supergiant to a black hole. Description of its pre-outburst light curve is surprisingly resembles current behaviour of Betelgeuze:
"A curious feature of the pre-collapse light curve is the decrease in brightness beginning in mid-2008 observed at all of the optical wavelengths during which the star also got significantly redder; indeed, with the colors of a true red supergiant before the brief outburst."
Outburst began in March 2009 when star's luminosity increased to at least a million solar luminosities, but by 2015 it had disappeared from optical view.
Curious coincidence...

Indeed, Dmitriusz! We can only hope. Stars have individual personalities and histories, so it's hard to know for sure if Betelgeuse might be taking a similar path. Intriguing. Thanks for the information!

After doing some casual observing from my red-zone home on the night of January 29th, I traveled to the orange-zone ASH Naylor Observatory. The transparency was about average but the seeing was a bit off. I observed a number of winter objects with the 17" f/15 classical Cassegrain housed in the French Dome and then moved on to Comet C/2017 T2 (PanSTARRS).

I next observed a number of other deep-sky objects before taking a long warm-up break.

I had never intended for it to be an all-nighter but I waited for M100 to rise high enough to have a shot at seeing the Type Ic supernova SN 2020oi. I knew it was going to be a rather difficult task but I was finally able to see M100 with certainty when It had culminated so I started stepping up the magnification from 259x to 432x and finally to 648x. At 648x, I was seeing two very faint pinpricks of light in the core of the face-on galaxy sporadically but I couldn't call it a real sighting.

Then I remembered that there is an even brighter Type Ia supernova, SN 2020ue, in NGC 4636, a spiral galaxy in Virgo. NGC 4636 is a member of the Herschel 400 list so I had observed it previously.

Before heading to NGC 4636, I took a detour to M63 to check on the accuracy of the scope’s Argo Navis. I had an acceptable view of the Sunflower Galaxy and then slewed the 17" classical Cassegrain to NGC 4636. To my surprise, I could readily see SN 2020ue at 170x. I bumped the power up to 216 and then 259x, both magnifications giving me a rather good view of the galaxy and its exploding star.

Hi Dave,
Yes, SN 2020ue remains fairly bright, one of the easiest supernovae in quite a while. I saw 2020 oi closer to maximum, and even then it was a difficult object to tease from the bright haze of the galaxy's core. 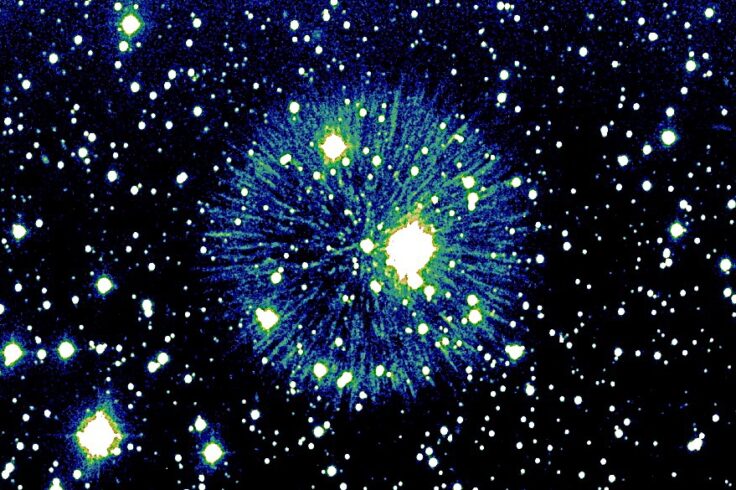