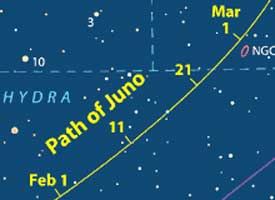 The large asteroid 3 Juno stays clear of bright stars as it sweeps through opposition in February. Its magnitude peaks at 8.3, a bit brighter than the faintest stars plotted on this finder. Click on the image to see the full chart.

In most years skywatchers can depend on the "Big Four" asteroids — 1 Ceres, 2 Pallas, 3 Juno, and 4 Vesta — to be easy targets for binocular or small-telescope viewing. But glimpsing Juno during this year's apparition, even when at its best in mid-February, will be doubly challenging.

First, Juno is positioned well away from perihelion, the innermost point of its moderately eccentric (e = 0.23) orbit. On February 11th, when it reaches opposition — directly opposite the Sun along the ecliptic — this minor planet is still a fairly distant 362 million kilometers (2.42 astronomical units) from the Sun and 215 million km (1.44 a.u.) from Earth. Shining at magnitude 8.3, Juno is nearly a full magnitude dimmer than it gets during closer, "perihelic" oppositions, as was the case 5½ years ago (Sky & Telescope: October 1996, page 69).

Moreover, as seen in the above chart, this asteroid is arcing through a rather sparse tract of sky near the convergence of Leo, Cancer, Sextans, and Hydra. Moving northwest at about 16' per day, Juno parallels a string of 3rd- and 4th-magnitude stars in the upper neck of Hydra. But it never comes close to anything that could serve as an easy celestial signpost. One interesting brush occurs at month's end, when Juno slips about 20' to the northeast of 10th-magnitude NGC 2775, an oval, nearly face-on galaxy more than 4' across.

Juno apparently leads a quiet existence, as planetary astronomers have not learned a great deal about this body since its discovery in 1804 by Karl Harding in Germany. Observations suggest that it is about 234 km across (a fourth the diameter of Ceres, the largest member of the asteroid belt) with a uniformly bright surface. A search for satellites in 1990 turned up nothing larger than a few kilometers across. Juno's sole claim to fame may be that in 1958 it became the first asteroid known to occult a star.

Use our interactive sky chart to find the region of the sky where Juno is located. (Juno is too faint to be seen on the interactive chart; use the chart above to determine its precise position.) Choose whichever link is most appropriate to your location:

You can also customize the sky chart for your location.