Aligning his camera on the same star for nine successive exposures, Sky & Telescope contributing photographer Akira Fujii captured this record of the Moon's progress dead center through the Earth's shadow during the July 2000 total lunar eclipse.

"Like a distant peach hanging in the sky!" That's how Akira Fujii described the July 2000 eclipse — a nighttime spectacle that was the most beautiful lunar eclipse the veteran astrophotographer had ever seen.

What is a Lunar Eclipse?

A lunar eclipse occurs when Earth lies between the Sun and the Moon, so that Earth’s shadow darkens the Moon. This can only happen when the Moon is full. The dark, central shadow is called the umbra, while the lighter shadow that surrounds it is the penumbra. The penumbral shadow is weak and often difficult to detect; for most observers a lunar eclipse really gets going when the umbra first touches the lunar surface. Totality occurs when the Moon is completely immersed in the Earth’s umbral shadow.

Lunar eclipses get their colorful red-orange hues from sunlight that is filtered and bent by the Earth's atmosphere around into its shadow. This is the light of all the world's sunrises and sunsets ringing the globe at the time. Bright and colorful eclipses occur when our planet’s upper atmosphere is most transparent. Major volcanic eruptions spew dust and aerosols into the stratosphere, resulting in darker lunar eclipses.

The Moon's brightness varies greatly from eclipse to eclipse, which would tell a lot about the state of the Earth's upper atmosphere if only we understood it better. To help in compiling statistics of this kind, many observers rank each eclipse they see on the five-point Danjon Scale.

Harvard astronomer Willard Fisher advocated an even simpler technique 80 years ago. He graded mid-totality into three classes depending on the equipment needed to see details on the Moon's surface: (1) the naked eye, (2) a 50-millimeter finderscope or binoculars at 7x, or (3) a 150-mm (6-inch) telescope at about 20x. Fisher reasoned that the Moon's surface brightness is unaltered by the aperture, but the visibility of low-contrast features like lunar maria depends greatly on the image scale. The darker the eclipse, the greater the aperture (and power) needed.

Still another useful gauge is the Moon's stellar magnitude at mideclipse. People who wear thick eyeglasses can simply take them off, turning the Moon and bright stars or planets into blobs of about equal size for easier comparison. Looking through the wrong end of binoculars also works. 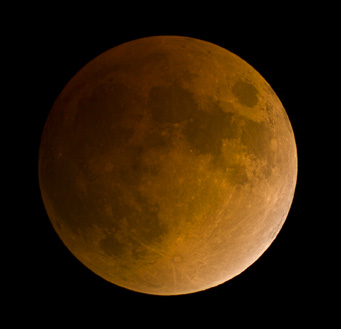 The best advice for photographing a lunar eclipse is to take lots of pictures at many different exposures. You never know just how bright your subject is going to be, and with a digital camera it won't cost anything to experiment to find the best exposures for your particular setup.

Most importantly, you'll need a telescope or telephoto lens that enlarges the Moon to a good size. For a typical lunar eclipse, the size of the Moon's image at the focal plane of your camera's detector equals the telescope's focal length divided by 110 (with the result in the same units as the focal length). Thus an 8-inch f/10 telescope, with a focal length of 80 inches (2,030 millimeters), will produce a Moon image 0.73 inch (18.5 millimeters) across.

While this will work perfectly if you're shooting with a full-frame 35mm-format detector, this is a little too big for the APS-C detectors found in the average DSLR camera. Adding a focal reducer will solve the problem and allow you to fit the lunar image comfortably in your detector. A good alternative would be to shoot through a telescope with a  focal length of around 1,250 mm.

An ordinary pocket or cell-phone camera will produce an image of the Moon that's too small to record the detail you can see with your unaided eye. If you have a pocket camera with a zoom lens, zoom the lens out as far as you can to get the highest possible magnification.

The minimum focal length for getting a good-looking Moon is about 300 mm. With a 500-mm lens and a 2-second exposure you can probably get away with a camera on a fixed tripod, but longer exposures or focal lengths will require a tracking mount to prevent blurring due to the turning of the Earth.

The full range of possible eclipse images — from sequences showing how the event unfolds, to close-ups of the shadow's edge on the Moon's surface — calls on a rather large bag of photographic tricks. Compared to recording a normal full Moon with a given camera setup, a lunar eclipse requires exposures perhaps 4 to 1,000 times longer — and everything in between! Much depends on the stage of the eclipse you're trying to record, the darkness of the shadow, and the pictorial effect you are after. 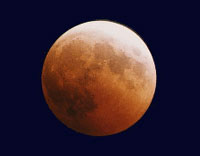 Proof that anyone following our instructions can get a decent eclipse photo. Sky & Telescope's Rick Fienberg obtained this shot during the September 26-27, 1996, event using his Meade 8-inch f/10 Schmidt- Cassegrain telescope and ISO 200 color-print film. He observed the lunar eclipse from suburban Boston, Massachusetts.

The shortest exposures are useful only during the partial stages near the very beginning and end of the eclipse, and they'll probably bring out little more than the smooth gradation in the shading of the penumbra, the brighter outer fringe of the shadow. That's also what you'll get if you let a camera's built-in metering system take control of the exposure.

To record the well-defined edge of the inner shadow, or umbra, which is so striking visually, you'll have to switch to manual mode and expose several times longer. Typically that means a ¼-second exposure at f/8, ISO 400, which over-exposes the Moon's brightest portion but gets sharp detail near the umbra's edge.

Once the Moon enters dark umbra, the part immersed in the deep shadow core, you should over-expose the sunlit portion of the Moon to be able to capture the entire disk together with that in the vastly brighter penumbra. Once you've found the exposure that gives you your best result during the partial phases, keep using these settings until totality. The resulting series of images can later be used to make a stunning animation of the eclipse progress.

For totality itself, there is no safe bet — the brightness of the fully eclipsed Moon is too unpredictable. But as noted earlier, memory cards are cheap compared to the rarity of a total lunar eclipse, so you can hardly go wrong trying every exposure setting you've got. There's plenty of time to experiment during this leisurely event. Simply try an exposure, then evaluate it on your camera's LCD screen. If it's too dark, try a longer shutter speed. If you're still over-exposing any areas of the ruddy eclipsed Moon, increase the shutter speed to take shorter exposures. 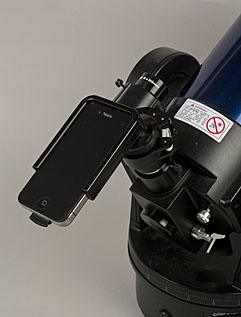 Aspiring astro imagers can simply hold their smart phone camera directly over the eyepiece. Alternately, you can either use homemade or commercial brackets to mount them directly to an eyepiece.

Since most point-and-shoot or cell phone cameras don’t have removable lenses, the only way to take pictures through a telescope is with the afocal or eyepiece projection method, whereby the camera is aimed directly into the telescope’s eyepiece. You can hold the camera by hand, mount it on a separate tripod, make or buy a bracket, or use a custom adapter to attach the camera directly to the eyepiece. This last option will produce the best results.

The online article "Astro Imaging with Digital Cameras" describes many of the tricks and techniques involved in taking astronomical images this way. But when digitally imaging a lunar eclipse, the key is to shoot, shoot, and shoot some more. The beauty of going digital is the immediacy with which you can see the effects of various settings — and change them! Since a lunar eclipse is a prolonged affair, you can keep on trying until you acquire a good image.

Between exposures, take time to have a good look at the Moon as it slowly creeps through the Earth's shadow; subtle hues not usually associated with a lunar eclipse can sometimes be seen visually, including teal and blue.

But above all, enjoy the view!