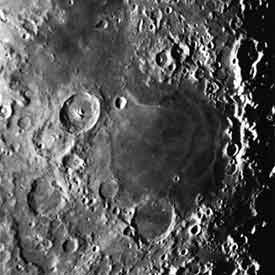 Mare Nectaris is the smallest of the circular maria on the Moon; lavas extend only 350 kilometers from shore to shore, and their estimated maximum thickness is just 1.5 kilometers. Altimetry measurements from the Clementine spacecraft show that Nectaris is quite deep — the bottom of the mare floor is 6.5 km below the average lunar-crust elevation. Despite this depth perhaps the relatively small deposit of lava did not cause the basin to subside enough for bending at the basin margins to form concentric troughs. Maybe that's why Nectaris is one of the few basins not surrounded by arcuate graben.

The Nectaris basin is beautifully defined by the spectacular Altai Scarp, which forms the southwestern rim of the basin. The Scarp is a dramatic 3.5- to 4-km-high cliff that continues as a weaker and more broken scarp eastward under the crater Piccolomini, and on northeastward past the crater Borda for a few tens of kilometers. The northern continuation of the Altai Scarp on the western side of the basin is harder to trace, partly because of the distraction of the magnificent chain of craters: Catharina, Cyrillus, and Theophilus. But the basin rim is marked by large amorphous chunks of land called massifs, which show up especially well when the terminator is nearby — the craters Tacitus, Kant, and Hypatia lie right on the rim. An unnamed promontory near Hypatia that points toward Mare Tranquillitatis is the last well-defined portion of the main ring of the Nectaris basin, but as an imaginary arc the ring continues through a series of rilles that pass north of the crater Capella. With a telescope, try to trace all around this major basin ring — you will encounter some remarkable terrain as you do. 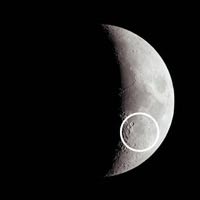 When Ralph B. Baldwin, an early proponent of the impact origin of craters, first recognized the basin structure of Nectaris, he pointed out that there were fragments of inner rings concentric to the 860-km-diameter Altai Scarp rim. He described the "great curved ridge paralleling the lava edge" between Colombo and Santbech and matched it with a similar, "diametrically opposite" short ridge linking Cyrillus and Catharina.

Fifteen years later, lunar scientists William K. Hartmann and Gerard Kuiper found more fragments of this ring and also mapped other rings. The most obvious is the roughly circular outline of the 400-km-diameter mare shore that is bounded by a pronounced ridge (named the Pyrenees Mountains) just east of the crater Bohnenberger, and a subtle ridge on the mare's south shore on either side of the crater Fracastorius. Inside this ring is a delicate example of a wrinkle-ridge ring that extends all along the eastern and southeastern edge of the mare and then again along the western shore. A low-sun angle will make this feature stand out boldly from the mare floor. And finally, some scientists think there is a subtle outer ring passing near the crater Sacrobosco and through the Apollo 16 landing site north of Descartes. I don't see any evidence of it, do you?