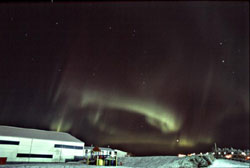 A display of the northern lights can be spectacular — or so I hear. The best aurora I’ve seen was a whitish pulsing sheet that filled half the sky one summer evening at the Stellafane convention in Vermont. One of my remaining life goals is to see a magnificent aurora with curtains and waves of color in the sky. They do happen — as I’ve heard from two people who went on Sky & Telescope and TravelQuest International’s "Iceland: Fire, Ice, and Aurora" tour in November 2002.

Although I’m interested in all things astronomical, the northern lights have a little more meaning to me. My (alas, now-closed) high school was named for Arctic explorer Robert E. Peary. Consequently, the school’s publications all had appropriate names: the newspaper was The Midnight Sun, the yearbook was called Polaris, and the literary magazine was titled Aurora.

The higher your latitude, the more likely an auroral display will be visible. The regions of the upper atmosphere where charged particles cascade down along Earth’s magnetic field are concentrated in ovals centered on the planet’s magnetic poles. Areas that lie underneath the auroral ovals have displays nearly every night — though they aren’t always spectacular. An energetic gust of particles from the Sun can widen and brighten the ovals considerably, so grand auroras can be seen as far south as Central America. 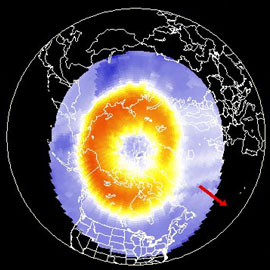 Web sites and software will help you monitor the geomagnetic environment and warn you if there's an aurora to be seen.

If you don’t live in Alaska or Iceland, you can improve your chances of seeing an aurora — and maximize your amount of sleep — by monitoring the level of geomagnetic activity. Several satellites constantly watch activity on the Sun and sense the solar wind. When their instruments detect the right conditions, an aurora is more likely.

Much of this information is available via the Internet. But if you want to turn your computer into Solar-Storm Central, Cary Oler’s STD Aurora Monitor and John Schilling’s Solscape, for Windows and Macintosh, respectively, will provide a wealth of data and images culled from various online sources. You can configure each program to indicate the likelihood of an aurora, and even activate an audible alarm.

The Aurora Sentry site provides real-time maps and magnetograms, with links to the data sources. You’ll probably want to check out the link for "Alert Services," which lists several e-mail notification services. Notices go out when geomagnetic indexes reach certain levels, or when an especially strong gust of solar wind is heading our way.

These services are only as good as the diligence with which you check your e-mail. As technology marches on, however, some cellular phones are gaining e-mail capability, so you could set yourself up to be signaled by phone. That is, if the magnetic storm hasn’t knocked out the network (Sky & Telescope: March 2000, page 50)!

Calling observers about auroras and other sky events is the goal of another longtime online resource. Spaceweather.com has provided geomagnetic information and predictions for years. Now it has branched into another medium with SpaceWeather Phone. Sign up for their service and, for a fee, they'll call you when things are happening in the sky, including displays of the northern lights. Of course, this still won’t excuse you for keeping your cell phone on during a movie.