On November 25th the 8.3-magnitude star SAO 78832 follows this apparent track behind Saturn, as seen from anywhere on Earth. However, the time it will reach a particular ring or gap could vary up to 10 minutes or so, depending on your location.

On Tuesday, November 25th, Saturn and its ring system will glide in front of an 8.3-magnitude star in Gemini. This is the second time in 10 days that Saturn occults a star — the first took place during the night of November 14–15 and was widely observed across North America. But unlike the previous occultation, when the star passed almost centrally through the planet's rings and ball, the event on the 25th has the star ducking behind the southern edge of Saturn and its ring system.

Skywatchers with the best view of this rare event are those living in the Pacific Rim region of North America and the Far East. According to David W. Dunham, (International Occultation Timing Association), the star (SAO 78832) may flicker as it crosses the thin outer F ring shortly after 10:35 Universal Time (UT) — 5:35 a.m. Eastern Standard Time, 2:35 a.m. Pacific Standard Time, or 9:35 p.m. daylight time in eastern Australia. It should vanish behind the A ring around 10:40 UT. The star will be in the Cassini Division at about 11:20 UT, when twilight will already be interfering for those in eastern North America; those in the western US and Hawaii should have a nice view of this event. 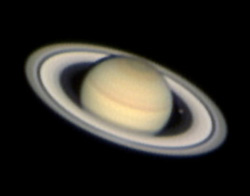 On November 15, 2003, at 10:38 UT, Albuquerque amateur Tom Williamson captured this view of the 8.4-magnitude star SAO 78867 in the C ring (between the planet and its bright B-ring) — the star is visible just off the right limb of Saturn. Williamson used a home-built 8-inch f/7 Newtonian (at f/35 using two stacked barlows) with a Philips ToUcam Pro webcam.

But from then on the star remains behind the B ring and Saturn's ball, not emerging (from behind the A ring, just east of Saturn's south pole) until about 14:00 UT.

If the seeing is excellent, observers with large enough telescopes — ideally 10-inch or larger — can watch as the star fades in and out of view behind the various rings and ring gaps. Note that the time the star will reach a particular ring or gap could vary up to 10 minutes or so, depending on your location.