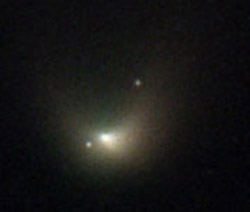 Astrophotographer Jerry Lodriguss captured a Sunward pointing nuclear jet at about the 5 o'clock position in this 5-second exposure of Comet Hale-Bopp. Observing from a dark site in New Jersey on the morning of February 10, 1997, Lodriguss used an Astro-Physics 130 EDT refractor working at f/6 and Fujicolor Super G800 film.

Before Comet Hyakutake (C/1996 B2) leapt high across the celestial stage in the spring of 1996, humankind had not seen a great comet for 20 years. Anyone who was under a dark sky will not soon forget how the comet gradually unfurled its tail — a long, ghostly banner of blue light — that ultimately traversed half the night sky. The unexpected splendor of Hyakutake's tail caused many of us to push aside the telescope and marvel at the phenomenon with the unaided eye. It seemed as if we had forgotten how beautiful a comet can be.

Yet the tail was only a part — albeit a big part — of the comet's spectacular close approach to Earth. Indeed, observers who found time to glimpse Hyakutake's bright head under high magnification were rewarded by dynamic displays of Sunward jets and a tailward spine. Then, all too soon, the comet and all it had offered faded into the twilight glow. Who really had time to fathom the dynamic action going on close to the comet's nucleus when so grand a sight was before us?

Fortunately, another bright comet, Hale-Bopp (C/1995 O1), arrived, and remained visible to the naked eye for months, not days. Amateurs with even small telescopes had an opportunity to probe this comet's nuclear regions and see some of its most secretive details.

A comet is a whimsical creature. Its behavior mimics that of a cat, being largely independent of our will and wishes. Yet Hale-Bopp was a splendid telescopic sight during the summer of 1996, some nine months before the peak of its display. By then a vast array of jets spewed dust and gas from a seemingly pulsating nucleus. Multiple parabolic hoods surrounded the inner coma, and a needlelike spine occasionally appeared in the antisolar direction. Such features are sometimes fleeting, sometimes dramatic. They go through cycles of brightness and periodically have odd appearances.

The clarity of the features in Hale-Bopp's head was outstanding by historic standards. Comet expert John Bortle notes that only a handful of bright comets in the last century have displayed such distinct, near-nuclear structure — particularly when more than 0.75 astronomical unit (110 million kilometers) from the Sun. Yet Hale-Bopp even displayed conspicuous structure when more than 4 a.u. out! 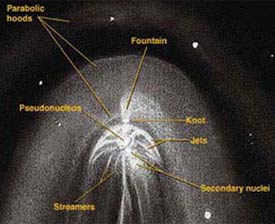 As a great comet rounds the Sun it can display many dynamic features, including multiple nuclei, jets, streamers, knots, and fountains. The author's pencil drawing of a hypothetical bright comet shows what you might expect to see emanating from a very active nucleus with a variety of magnification. The field of view shows about ½° of sky, with the Sun toward the top. Click on the image to see the complete illustration.

The accompanying illustration shows the various types of structure common to the inner nuclear region of bright comets. Use it as a blueprint of activity, keeping in mind that not all the details shown will necessarily be visible when you observe. In addition, the shape, number, direction, and intensity of these features will vary from night to night, if not from hour to hour. But knowing what to look for before going to the eyepiece will help you on your road to discovery, whether personal or scientific. All you need to begin your journey are your telescope and these accessories: a series of your best eyepieces (low, medium, and high power), sketchpad, pencil, and red light.

I always work from high power to low power, building a central foundation upon which ever-larger details can be incorporated. High magnification is also the most important aid for picking out fine details in the comet's innermost regions. Using it reduces the surface brightness of the surrounding coma, causing subtle features to stand out from their otherwise bright background. So once you've located the comet with low power, examine it briefly for any obvious details. Then center the comet and replace the low-power eyepiece with one having a shorter focal length to yield higher power, preferably one that magnifies 50 times the inches of your scope's aperture. Even higher magnifications can be used if the atmospheric conditions and your telescope's optics allow.

Alternating quickly between these eyepieces should reveal a dramatic effect: at low power the pseudonucleus usually looks slightly swollen, while high power shows it as a fainter starlike point surrounded by one or more round envelopes of deep inner coma. (This is not the comet's true nucleus, which is much too small to be resolved.) On rare occasions the pseudonucleus occults or passes arcseconds from a brighter star. The latter's glare further diminishes the brightness of the inner coma and allows you to penetrate deeper into this inner sanctum. 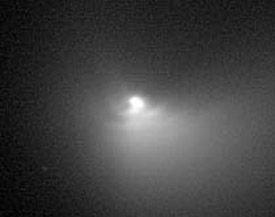 Astroimager David Hanon of Ringgold, Georgia, captured this close-up of Comet Hale-Bopp on February 23rd at 11:20 Universal Time. He used a 7-inch f/9 Astro-Physics refractor on a custom-built Byers mount and an SBIG ST-8 CCD camera for this 10-second exposure. Hanon processed the image to bring out a wealth of near-nuclear detail, including several concentric dust shells.

After completing my high- and medium-power observations, I make a separate low-power rendering of the comet, looking specifically for any faint outer hoods that wrap the coma in onionlike layers. Finally, I add to my drawings the tail structure within 1° of the nucleus. Once indoors I take all the sketches depicting the views with various magnifications and make a final drawing that combines all the details. Don't forget to note the scale and orientation of your drawing, along with the time, equipment used, and atmospheric conditions during your observation.

The nuclei of some bright comets have fragmented around perihelion passage, and high magnification is necessary for documenting any immediate changes near the nucleus. For example, in late 1995, the periodic comet 73P/Schwassmann-Wachmann 3 split into three fragments, all visible in a small telescope (Sky & Telescope: March 1996, page 11). Using a 4-inch refractor from Volcano, Hawaii, I noticed that the comet's nuclear region appeared extremely elongated at low power, but the three faint secondary nuclei were clearly visible inside this glow at 200x.

Brad D. Wallis, a member of the Cassini imaging team at JPL, obtained a sequence of nightly images of the nucleus of Comet Hale-Bopp at about 02:50 Universal Time March 24th to 30th. He used a 12½-inch f/5.85 Ritchey-Cretien telescope and an SBIG ST-7 CCD camera with a red filter; each image is the sum of six 5-second exposures. Wallis processed the images to highlight the comet's prominent dust fountain and hoods. Sky & Telescope then assembled the frames into an animation that shows the nucleus rotating and the dust spiraling out into space.

When dust and gas are liberated from the comet's nucleus, they flee in fantastic fountains. Through the telescope, you'll see this activity as jets, linear rays that flow in the Sunward direction. A jet can appear as a single ray or a fan of several arcing rays. High power should reveal any strong sources near the nucleus. If jets are suspected, record their positions, switch to moderate magnification, and study the shape of the inner coma. If the coma is very bright, the jets might be lost in the glow, but the material they have ejected can surround the inner coma in a series of parabolic hoods. The farther a jet extends from the nucleus, the lower its surface brightness becomes, so moderate and low magnifications should be used to trace out its greatest extent. Generally, long jets will have a strong linear base that gradually curve toward the antisolar direction.

One of the most curious features within a jet is a knot of material that can easily be misidentified as a secondary nucleus. Secondary nuclei usually migrate tailward over several nights. So be leery of bright spots in the Sunward direction; these are probably clumps of gas and dust shooting off the nucleus within the jets. Many times the knots are brighter than the jets themselves, so a bright knot in a faint or invisible jet will certainly cause alarm! Comet Hale-Bopp exhibited several intense knots, especially in one strong and persistent north-pointing jet, during its passage around the Sun.

Sky & Telescope's Dennis di Cicco and Stuart Goldman obtained this close-up of Comet Hale-Bopp on March 30, 1997, using a Meade 16-inch LX200 f/10 telescope and an SBIG ST-7 CCD camera. A composite of two 2-second exposures, the field shown is about 5½ arcminutes wide. Left: In this view, the image has been processed to reveal a jet spiraling off the rotating nucleus. Right: Here the image has been processed to highlight multiple concentric hoods.

On nights when the comet is visible for several hours, try making a series of drawings of the inner nucleus. I use a pocket sketchpad and render the nucleus each hour on separate sheets of paper. Such multiple drawings are an excellent way to show the evolution of the features.

The Importance of Twilight

When Comet West entered the morning sky in March 1976, veteran observer Michael Mattei gave me some valuable advice: "Follow the nucleus into the twilight." So it was that on the morning of March 8th I turned the 9-inch refractor at Harvard College Observatory to the comet and patiently waited for sunrise. While watching the comet's bright, swollen pseudonucleus battle the dawn, I noticed the surrounding coma vanishing in layers. The pseudonucleus began to look peculiar — it was elongated in a line perpendicular to the Sunward direction.

Suddenly, two nuclei snapped into view, one of them itself elongated. I observed again the next morning and found not two but four nuclei forming a trapezoid inside the comet's inner coma. Twilight had filtered out the most intense regions of the inner coma and left behind the stunning signature of a comet being torn apart by the solar forces.

Mattei's advice pertains to all comets, so try making your own observations in twilight. Who knows what surprising structures you'll see! And the drawings we make can be handed down to upcoming generations of comet watchers. Nobody knows when the next great comet will appear. "Like a breaching whale before it plunges into the ocean depths, a comet briefly luxuriates in the sunlight and then is gone," wrote Carl Sagan and Ann Druyan in their book Comet.

So don't wait for the next comet of the century to appear. Explore the hidden depths of the inner nucleus of any comet that happens by. The time to start is now!