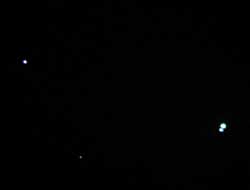 Keen-eyed observers can tell that the bend in the Big Dipperâ€™s Handle is actually marked by two stars, Mizar and Alcor, very close together.Seen through a telescope, Mizar and Alcor appear to have a third companion. And Mizar is itself a true binary system, that is, two close-together stars orbiting each other.

In 10 minutes I'll bet I can get you hooked on my favorite type of stargazing. Are you game?

On the next clear evening, go outside as soon as it gets dark and find the Big Dipper. Take a good long look at the star at the bend in its Handle. Do you see anything odd about it? Now take a peek with binoculars or any telescope, and its secret will be revealed: this is actually two stars, named Mizar (the brighter one) and Alcor. If your vision is sharp, you should be able to just make out Alcor with your eyes alone.

But wait — there’s more! Using even a small telescope at low power, you’ll see a faint third star forming a triangle with Mizar and Alcor. Now focus on Mizar itself, and switch to a higher-power eyepiece. It’s a double too, a pair of pinpoints nearly touching each other.

Congratulations! You’ve just tracked down the first double star system ever discovered — and you’ve learned that not every star is a loner.

Not surprisingly, astronomers based their early assumptions about other stars largely on what they knew about our own Sun. And since the Sun is solitary, they thought all other suns were individuals as well. But it turns out that at least half of all stars — and perhaps as many as 80% of them — are members of double and multiple systems. Many hundreds of these are observable with small backyard telescopes.

Getting to Know Them

A double star is exactly what it sounds like: two tiny beacons of light positioned close together in your scope’s eyepiece. Some of these pairings are merely chance alignments of unrelated objects, known as optical doubles, that lie at very different distances from us.

But usually there’s a true physical connection. In most cases the stars are whirling in orbits around each other, typically taking anywhere from a few decades to many centuries to complete a full twirl. These are visual binaries. (Some doubles are so close together that their orbital periods are measured in minutes! These require large observatory telescopes and special instruments to be revealed.)

In yet other systems, the stars are so widely separated that they are likely not orbiting one another at all. But they’re still related, drifting through space together as what astronomers call common-proper-motion pairs. And groupings of three or more suns are technically called multiple stars, though usually you’ll see the catchall term “double star” used to describe all these circumstances.

You can find good examples of double and multiple stars in any given part of the sky at any hour of night during the year. This is a real plus if your overhead view is limited by trees, houses, or other obstructions, as my observing site is. Also, because they’re often bright and easy to spot, these stars can be viewed on nights you find useless for looking at nebulas and galaxies due to haze, moonlight, or light pollution. And despite their profusion, no two doubles look exactly alike! They display a seemingly endless combination of brightnesses, separations, and configurations.

But it’s the perceived colors of these objects that I find especially fascinating. For me, double stars are the tinted jewels of the sky, and many lovely combinations are found among the brighter pairs. I used the adjective “perceived” because in most cases the color is illusory, a contrast effect between stars of different brightness. Yet sometimes the hues are real. True color differences between stars result mainly from differences in temperature, with red ones being relatively cool and blue ones quite hot.

A trick for enhancing color perception is to slightly defocus the view through a low-power eyepiece — as the stars smear out into roundblobs, their colors become more apparent. Even pairs that exhibit no contrasting hues (which often happens when they’re of similar brightness) or no apparent color at all can still be thrilling sights. In the eyepiece they typically appear like radiant diamonds against the velvet blackness of space.

The sampling in this article describes eight of the most fascinating double and multiple stars visible in small telescopes on early evenings in September and October. In each case the dominant (primary) star is bright enough to be seen with the unaided eye from reasonably dark skies. And while every pairing can be resolved, or “split,” in a small telescope, the view typically becomes more exciting (brighter images and crisper separation) in telescopes with larger apertures.

Generally, you’ll get the best visual impact if you use the lowest magnification that just nicely separates the two stars — typically 25× to 50× for wide pairings. For close-together doubles, you’ll need powers of 100× or more and a steady atmosphere (often encountered on hazy nights) to separate the components well.

The Double-Double (Epsilon Lyrae): This famous multiple system lies in the same finderscope field as dazzling Vega, making it a snap to locate. Here you’ll find two very widely separated stars that are readily resolved with the slightest magnification. A 3- or 4-inch telescope at 100× shows both of them in turn to be very close, roughly matched white pairs. Both binaries have periods measured in hundreds of centuries, and together they’re orbiting around a common center of gravity with a period that may be as much as a million years! Quadruple systems are relatively rare, and this celebrated object is certainly one of the finest in the heavens.

Alya (Theta Serpentis): This pretty, nicely separated double is situated just west of the bright star Altair. Consisting of two nearly matched suns, it’s easily resolved even in a 2-inch (or 60-mm) telescope at 25×, while the view in a 4-inch at 50× is truly stunning. Here is a case where the stars show no color contrast; both look pure white to me. They’re gliding through space together as a common-proper-motion duo. Although this double is largely overlooked today, past observers raved about Alya, calling it “elegant,” “noble,” “exquisite,” “superb,” and an “imperial pair in regal setting!” — proving that even colorless doubles can be beautiful sights.

Albireo (Beta Cygni): Ask a seasoned stargazer to name the most beautiful double star in the sky, and the answer will almost certainly be Albireo. You’ll find it at the foot of the Northern Cross in Cygnus, located in the midst of the Summer Triangle formed by Vega, Deneb, and Altair. If you think stars don’t have color, then just take a peek at this tinted gem! The primary is a rich golden orange, and its fainter companion shines with clear sapphire blue light. These heavenly hues are real — they’re not just a contrast effect. Albireo is a wide double; even a 2-inch-aperture scope at 25× resolves it beautifully and shows the vivid color contrast. Both of its suns lie roughly the same distance from us, floating against the rich backdrop of the Milky Way as another common-proper-motion pair. 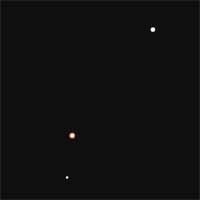 Omicron-1 Cygni: This striking system lies just west of Deneb and consists of three widely separated stars of differing brightnesses and colors. A 3-inch aperture at 30× provides a superb view. The hues here are very patriotic — “red” (actually ruddy orange), white, and blue! This is one of the easiest, brightest, and most colorful triple stars found anywhere in the sky.

Gamma Delphini: You’ll find this lovely tinted gem marking the “nose” of the little diamond-shaped constellation Delphinus, the Dolphin. A 3- or 4-inch telescope at 50× shows a neat close pairing of stars that differ slightly in brightness. Observers have noted various hues, with most seeing a deep yellow primary and pale emerald green companion. Viewed in a small telescope at a power of at least 150×, those pinpoints of light become spurious diffraction disks that make the colors more obvious. Astronomers have found little indication of orbital motion, but the stars are drifting through space together as a system.

Enif (Epsilon Pegasi): Here’s another “nose,” this time in Pegasus, the flying celestial Horse. While not a striking double in itself, I’ve included Enif here as one of the few deep-sky objects that “does something” while you watch it. A faint bluish violet companion attends the yellowish and much brighter primary at a wide distance. Gently tapping or shaking your telescope tube causes the dimmer star to appear to swing back and forth like a pendulum. This phenomenon was first noticed by the great 19th-century observer John Herschel, who correctly deduced that light from the fainter star takes longer to stimulate the retina, so its motion appears to lag behind that of the brighter star. While you can see this effect in a 4-inch scope at 50×, it becomes ever more striking as aperture increases. Skygazers have nicknamed Enif the "Penulum Star."

Delta Cephei: At the upper-right corner of the house-shaped constellation Cepheus, poised on its pointy roof high in the northern sky during autumn, lies an object with a dual personality. It’s an attractive, widely separated double star that might remind you of Albireo. While its contrasting pale orange and pale blue tints are a fine sight in a 3-inch scope at 30×, you'll find that they are no match for Albireo’s vivid hues. But Delta is not only a double star, it’s a pulsating sun as well — the prototype of the Cepheid variables routinely used by astronomers to measure distances to nearby galaxies. Every 5.4 days Delta’s primary star cycles in brightness by nearly a full magnitude (a factor of 2½ times) — obvious even to the unaided eye.

Almach (Gamma Andromedae):This radiant duo sits at the end of the curved line of stars marking Andromeda, in the northeastern sky in fall evenings. Its magnificent topaz and aquamarine tints are a joy to behold in any telescope. The bright primary and fainter secondary lie snugly together, but even a 2-inch aperture at 60x separates them. Many observers feel that Almach’s colors are more intense than those of rival Albireo — and I agree! Since both doubles can be observed at the same time in the autumn sky, why not compare them yourself? While no definite orbital motion has been detected, Almach’s stars are moving through space together.

As these fine examples attest, you can dabble in double stars using even the smallest telescopes. Take it from me: until you’ve tried “double-stargazing,” you’re simply missing out on some of the brightest and most colorful wonders the heavens have to offer.