Normally too faint to appear on this chart (which has a magnitude limit of 10.0), RS Ophiuchi could suddenly brighten to 5th or 4th magnitude when the next outburst occurs. For help in monitoring it, the magnitudes of suitable comparison stars are given to tenths with the decimal point omitted. (A finder chart is on the next page.) Click on the image to see the full chart.

Since it's now many years since the last outburst, another one may occur at any time. The star lies at right ascension 17h 50.2m, declination –6° 43' (equinox 2000.0), and is well placed for viewing by Northern and Southern Hemisphere observers during the middle of each year.

RS Oph has been of great interest to me, because I happened to be the observer on the Mount Wilson 60-inch telescope on the night of its outburst in 1958. On July 14th I was photographing the spectra of stars in the open cluster NGC 6940 in Vulpecula with the telescope’s Cassegrain spectrograph and "short camera." We received a phone call from Leland Cunningham at Berkeley (who had a reputation for being a late-night worker), and he relayed a telegram announcing the outburst of RS Oph. I immediately threw away the partially exposed plate and turned the telescope to the new position. And there, in the center of the field, was a bright purple star.

Now, purple stars are no more common than purple cows, so I knew that I had an unusual object. I quickly switched to the spectrograph’s long camera, which gave moderate resolution at 20 angstroms per millimeter. Parts of the spectra recorded on July 14th, 17th, and 25th are shown below. In addition to the very broad spectral lines formed in the outward-moving gas at a velocity of about 3,000 kilometers per second, there are a variety of sharp lines not usually seen in novae. They reveal the presence of quiescent circumstellar gas that surrounded the whole system prior to the outburst. 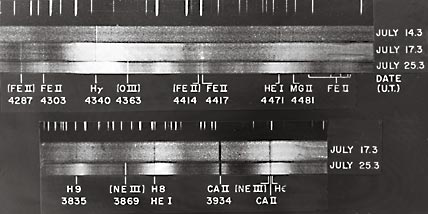 These historic spectra reveal day-by-day changes in the mayhem of RS Ophiuchi’s 1958 eruption. Many spectral lines, all in deep indigo or violet light, are labeled with their wavelengths in angstroms. Laboratory reference lines appear above each set. RS Oph is a very rare type of nova; it consists of a red-giant star that is shedding material, some of which is being collected by a close, white-dwarf companion. This accumulation eventually triggers a thermonuclear explosion.

A detailed study of these sharp lines showed that those requiring high density were present only on the first night. Lines that formed at lower density, such as doubly ionized neon (Ne III), were seen later. The whole phenomenon could be explained by an outward-moving shock wave that marked the leading edge of the nova’s ejecta and was rapidly sweeping up the circumstellar gas. As the shock reached the outer layers of the gas, it raised the temperature to about 2 million degrees Kelvin and excited the same emission lines that are seen in the Sun’s corona.

Spectra taken that first night showed features not seen even one night later, nor in any other nova. So I urge readers to keep an eye — or, rather, binoculars — on the RS Oph region. Be prepared to notify the International Astronomical Union’s Central Bureau for Astronomical Telegrams immediately upon recognizing that a new outburst is beginning.

For a little fun at the same time, it would be easy enough to record a visual light curve for RS Oph’s neighbor, the Cepheid variable Y Oph (marked "Y" on the chart on page 1). It varies from visual magnitude 5.9 to 6.5 in a 17-day period.