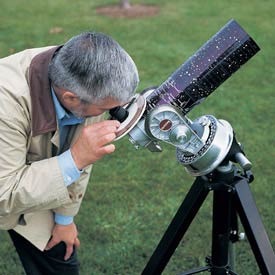 Ron Tanguay is a veteran double-star observer. Recently he completed a series of highly accurate measurements for 17 stars using his 3.5-inch Questar telescope. The data were of sufficient quality to be considered for inclusion in the Washington Visual Double Star Catalog.

During the late 19th century measuring visual double stars was one of the most popular branches of astronomy among both amateur and professional astronomers. Today only a small number of professionals remain active in the field. With more than 78,100 entries in the Washington Visual Double Star Catalog (WDS), 1996, the task of keeping tabs on these binaries is a monumental one indeed! The work, however, is wide open to amateur participation and is one of the areas where the dedicated amateur has the potential of doing professional-level work — and having a lot of fun to boot.

The main reason for measuring binary stars is to determine the total mass of a double-star system. Why? This information is of crucial importance to theorists working on stellar evolution. Indeed, our understanding has benefited greatly from thousands of measurements made by double-star observers since the time of Wilhelm Struve in the early 19th century.

With so many large telescopes now in amateur hands, owners of small instruments sometimes feel left out of the action. When it comes to accurate double-star measurement, however, optical quality is far more important than aperture. To illustrate this point, I recently conducted a visual program with a 3.5-inch Questar. My results show that observers with high-quality, solidly mounted telescopes in the 3- to 4-inch range are capable of accurately measuring double stars. Observers with larger instruments can expect even better results. 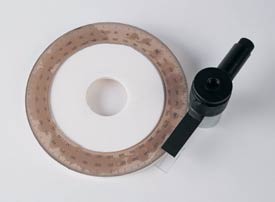 A 360° protractor glued to a matching piece of foamcore, and a pointer attached to the reticle eyepiece, enable Tanguay to measure a double star's position angle.

Apart from a good telescope on a solid motorized mount, you need one other piece of equipment to measure double stars: a micrometer. Although a variety of measuring devices have been used by amateurs, the reticle-type micrometer is the easiest. One of the very best is the Celestron Microguide eyepiece. The eyepiece itself is a 12.5-mm Orthoscopic of the classic Abbe design with a diopter adjustment at the eyelens and a battery-powered LED illuminator. The only modification necessary for double-star work is the addition of a position-angle circle and a pointer. You can also make your own reticle micrometer from an existing eyepiece and a reticle available through Edmund Optics.

A Barlow lens will be needed to change the telescope's magnification. In fact, several Barlows, each with a different amplification factor, will give a wide range of magnifications.

Before you can begin to measure double stars with the reticle eyepiece, its linear scale must be calibrated with great accuracy. This is a one-time procedure that need not be repeated so long as you continue to use the same configuration of eyepiece, Barlow lens, and telescope. To accomplish this calibration, four to six reference doubles must be selected from the list of stable pairs on the next page. These are stars that have not changed separation since they were first observed.

To begin the calibration, simply note the number of divisions on the reticle's scale separating the primary and secondary of each calibration star. For example, if the components of the lovely double star Albireo, which are 34.5 arcseconds apart, span 10.2 divisions, then the scale of the reticle is 3.38 arcseconds per division (34.5 divided by 10.2). A minimum of four different calibration pairs should be used and the results averaged. To reduce the effects of differential refraction, these stars should be measured only when they are 30° or higher above the horizon. Don't forget to repeat this procedure for whatever Barlow lens is added to the system.

When I calibrated my micrometer with the Questar, I took a large number of measurements of each star and then averaged them. Remember, work carefully and take your time; your calibration can never be too accurate! The Celestron reticle micrometer fitted to my Questar yields about 100x and gives a calibration value of 16.093 arcseconds per division — useful for very wide pairs. Engaging the Questar's 2x internal Barlow lens produces a magnification of 200x and a calibration value of 8.062 arcseconds per division. For the closest pairs I use the Questar's internal Barlow and a Celestron Shorty 2x Barlow, for a magnification of 487x and a reticle scale of 3.389 arcseconds per division. Although this much magnifying power might seem excessive, I use it for most of my double-star work.

Below is a list of double stars that can be used for calibration (as discussed on the previous page). The article continues on the next page.

A Night at the Telescope 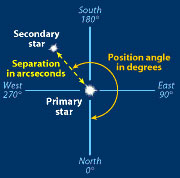 For the double-star observer, there is nothing more inviting than a clear and steady night. After polar aligning, the first order of business is to make sure that your reticle eyepiece's position-angle scale is set up correctly. The inevitable jostling that the telescope is subject to between uses warrants that this be checked at the start of every observing session. Fortunately, the procedure is straightforward. I do this by allowing a star near the celestial equator and on the meridian to trail along one of the two parallel lines of the micrometer's linear scale. This is done with the telescope's drive off and without using a Barlow lens. The micrometer is rotated in the eyepiece holder until the star follows the reticle line very accurately. Once this condition is met, I rotate the position-angle protractor until the 90° mark is indicated by the pointer, taking care not to disturb the eyepiece position. This process is repeated with the Barlow. The pointer is now calibrated with the north point at zero and east at 90°.

With the preliminary adjustments out of the way, you're all set to begin making double-star measurements. The pair being measured should be at least 30° above the horizon to reduce differential refraction and well within the magnitude and resolution limits of your telescope. Begin by locating your first pair and boosting the magnification until the stars span as many reticle divisions as practical. The method I find best for measuring separation with the Microguide reticle micrometer is to carefully rotate the eyepiece until the primary and secondary stars are parallel to the linear scale and the primary is dead center on one of the scale's divisions. Estimate the separation of the pair to 1/10 of a division and convert this into arcseconds using the calibration value for the setup. That's all there is to it — you have just measured the star's separation.

Before you start celebrating, keep in mind that there is a second equally important measurement to make: the position angle of the pair. Begin by rotating the eyepiece until one of the reticle lines of the linear scale bisects both the primary and the secondary at the same time. Now is a good time to note the approximate position-angle reading on the degree scale. This will serve as a reality check to ensure that you haven't made a mistake and that your position angle is near the expected value for the stars being measured.

When you are confident the reticle is correctly positioned, take an accurate reading off the degree circle. Then rotate the reticle 180° and repeat the reading. This procedure is done again for a total of four readings. The results are averaged (remember to subtract 180° from the readings obtained by rotating the reticle). Keep in mind that when the primary star is centered in the field of view, the companion is said to have a position angle of 0° if it is directly to the north of the primary, 90° when directly east, 180° when directly south, and 270° when directly west. Be careful to avoid accidentally offsetting your measurement by 90° or 180°. This is where your reality check comes into play. For greatest accuracy, the measurements of separation and position angle should be repeated on four to six nights and the results averaged.

A Question of Accuracy 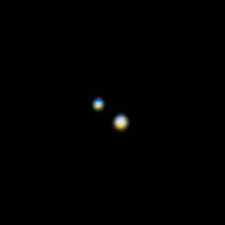 This is only a rough guide, since two highly skilled observers can obtain measures that differ more than the limits set above. If your measurements typically fall within these limits, your results will be of scientific value. If, however, you consistently obtain measures that are far removed from the WDS data, then you should check such things as the optical quality and alignment of your telescope, quality of the micrometer, prevailing seeing conditions, and your measurement technique. The reticle micrometer, just as with any type of visual micrometer, requires a certain degree of proficiency to be used correctly. You should not expect accurate results at first. Practice, in conjunction with meticulous methods, will eventually yield quality results.

Science in the Numbers

It is a common belief among some observers that the CCD camera has rendered visual micrometry obsolete. Nothing could be further from the truth. One of the properties lost with the use of CCDs for double-star measurement, whether by speckle interferometry or integrated imaging, is dynamic range. It is very difficult for CCDs to measure doubles with components of substantially different brightnesses or faint pairs that are very close. For these challenging pairs, visual micrometry still remains the best measurement technique.

Because so few professionals remain in this field, qualified amateurs are badly needed. Double-star micrometry has always had a significant percentage of amateur observers in its ranks. For example, Paul Baize, perhaps the greatest double-star observer who's ever lived, made 25,000 measurements and calculated 200 orbits! With several thousand visual double stars within range of 3- to 8-inch telescopes, today's amateurs are in a unique position to make contributions to double-star astronomy that they previously may not have thought possible.