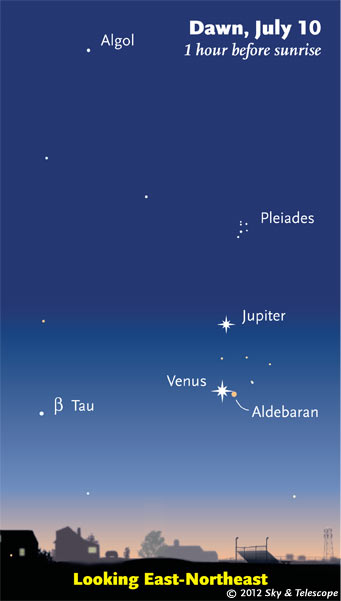 Worth waking up for: Any time this week, set the alarm to catch the dawn planet drama about an hour before your local sunrise time. (If you're on daylight saving time, make sure the Daylight Saving Time box is checked.)

Mercury is disappearing deep in the sunset.

Venus and Jupiter (magnitudes –4.7 and –2.1) shine dramatically in the east-northeast before and during dawn. They remain stacked 5° or 6° apart this week, with Jupiter on top. Watch Aldebaran, much fainter, moving this week from below Venus to its right. Also in Venus's starry background are the Hyades, and above Jupiter are the Pleiades. The asteroids Ceres and Vesta, magnitudes 9.1 and 8.4, are there too! See article Predawn Treats for Early Risers for the naked-eye aspect, and to find the asteroids, Ceres and Vesta: July 2012 – April 2013.

Mars (magnitude +0.8, in Virgo) glows orange in the west-southwest at dusk and lower later. It's to the lower right of the Saturn-and-Spica pair by about 20°. It's heading their way; Mars will pass right between Saturn and Spica in mid-August.

In a telescope Mars is gibbous and very tiny (6.3 arcseconds wide), continuing to fade and shrink.

Saturn (magnitude +0.7, in Virgo) shines in the southwest as the stars come out. Below it by nearly 5° is Spica. After dark they move lower to the west-southwest.

Uranus (magnitude 5.8, at the Pisces-Cetus border) and Neptune (magnitude 7.8, in Aquarius) are high in the southeast and south before the first light of dawn. Finder charts for Uranus and Neptune.