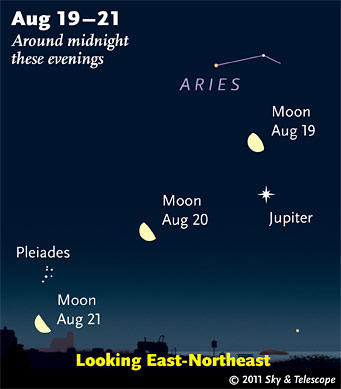 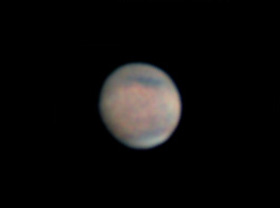 If you have any doubt that stacked-video imaging can do black magic on the planets compared to what you see by eye in the same telescope, look at this. Mars was a mere 4.5 arcseconds wide on August 13th when John Boudreau of Saugus, Massachusetts, took this image with an 11-inch scope. Visually, Mars at that size is a tiny, featureless fuzzblob. Go look if you don't believe me.

Click for animation of two images showing 7 minutes of the planet's rotation. This makes it easy to see what features here are real rather than noise. Hint: Most of them are.

Mercury and Venus are hidden deep in the glow of the Sun.

Mars (magnitude +1.4, crossing Gemini) rises around 2 a.m. daylight-saving time. By the beginning of dawn it's in good view up in the east. In a telescope, Mars is just a very tiny blob only 4.6 arcseconds in diameter.

Jupiter (magnitude –2.6, in southern Aries) rises in the east-northeast around 11 p.m. daylight saving time. Look above it for the little star pattern of Aries and (once Jupiter is well up) closer below it for the head of Cetus, rather dim. By early dawn Jupiter shines very high in the south, making this the best time to examine it with a telescope. It appears 40 arcseconds wide.

Saturn (magnitude +0.9, in Virgo) is sinking ever lower in the west-southwest at dusk. Look for it far below high, bright Arcturus. Left of Saturn by 11° twinkles Spica.

Uranus (magnitude 5.8, near the Circlet of Pisces) and Neptune (magnitude 7.8, in western Aquarius) are well up in the southeastern part of the sky before midnight. Here's our printable finder chart for both. 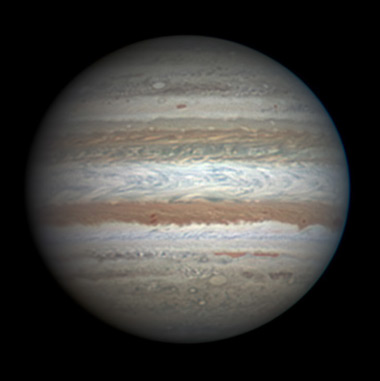 Another amazing stacked-video shot. "Seeing was excellent this morning," wrote Christopher Go on August 16th. "These are probably my best images so far this season." This is the side of Jupiter away from the Great Red Spot. South is up. "The [white] Equatorial Zone looks very complex. The [broad, dark] South Equatorial Belt [above center] is very complex. Note the tiny white ovals lining up on the southern edge of the SEB." Go now uses a C-14 scope.

Pluto (magnitude 14.0, in northern Sagittarius) is highest in the south right after dark; don't delay. A big finder chart for it is in the July Sky & Telescope, page 64.