Some daily events in the changing sky for December 18 – 26. 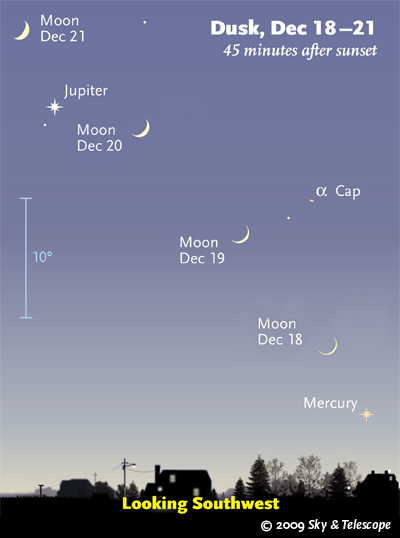 The waxing crescent Moon points the way to Mercury low in the cold twilight. The 10° scale as about the size of your fist held at arm's length. (These scenes are drawn for the middle of North America. European skywatchers: move each Moon symbol a quarter of the way toward the one for the precious date.) 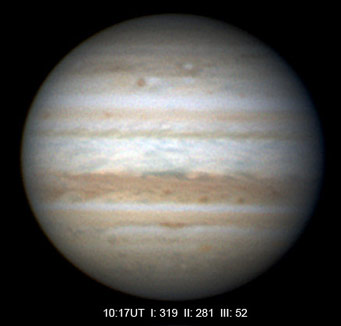 Jupiter continues to shrink as it moves westward toward conjunction; turn a telescope on it in late twilight while it's still at its highest. The North Equatorial Belt remains massively broad and dark, while the South Equatorial Belt has greatly faded and is divided into two narrow parts. Christopher Go in the Philippines took this image on December 14th at 10:17 UT, when System II longitude 281° was on the planet's central meridian. South is up.

Stacked-video images like this can show much more detail on a planet than the same telescope will reveal to the human eye.

Mercury (magnitude –0.5 fading to +0.5) is visible low in the southwest in twilight. Look about an hour after sunset. Mercury remains near elongation all week but loses brightness quite noticeably during this time.

Venus is lost in the sunrise. Not until late winter (Northern Hemisphere winter) will it emerge into view again, after sunset.

Mars (magnitude –0.5, in Leo) rises around 8 p.m. local time, far below Castor and Pollux a bit north of east. A little later, twinkly Regulus rises about a fist-width beneath it. Mars and Regulus are very high in the south in the hours before dawn, now lined up horizontally.

In a telescope, Mars is 11.5 to 12 arcseconds wide and growing. The north polar cap is in good view, bordered by a wide dark collar. Do you see other surface features? Identify them with the Mars map and observing guide in the December Sky & Telescope, page 57. Mars is on its way to opposition in late January, when it will reach 14.1 arcseconds wide. 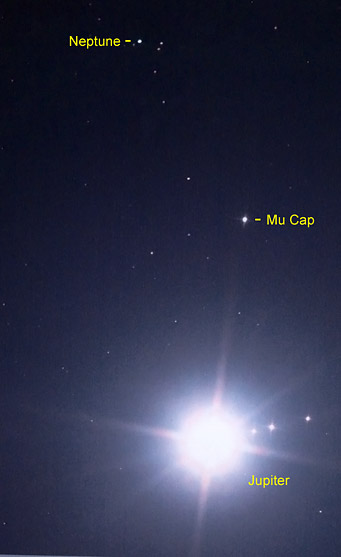 Jupiter and Neptune had a previous conjunction last July. On the morning of July 9th, Bob Kimmel of Rockledge, Florida, took this image. Why are they so different in brightness? Jupiter is a bigger planet, but the main reasons are that Jupiter is closer to the Sun (so it gets illuminated more brightly) and also closer to Earth.

Jupiter (magnitude –2.2, in Capricornus) shines brightly in the south-southwest in twilight, and lower in the southwest after dark. It sets by 8 or 9 p.m. Jupiter is moving lower west toward the sunset week by week, sets earlier, and continues to shrink as Earth pulls farther away from it in our faster orbit. In a telescope Jupiter is currently 36 arcseconds wide, compared to 49″ around its time of opposition last August.

Saturn (magnitude +1.0, in the head of Virgo) rises in the east around midnight and shines highest in the south before and during dawn. Its rings are still narrow, tilted 4.8° from edge-on to us.

Uranus (magnitude 5.8, just below the Circlet of Pisces) is highest in the south right after dark.

Neptune (magnitude 7.9, in Capricornus) lurks closely in the background of Jupiter, which shines 10,000 times brighter. Nevertheless Neptune is detectable in good binoculars. Jupiter and Neptune reach conjunction, with Neptune 0.6° north of Jupiter, on the evening of December 19th. By the 25th they widen to 1.0° apart. To identify Neptune (and Uranus) among other faint points, use our finder charts for these two planets.

Pluto is in conjunction, behind the glare of the Sun. 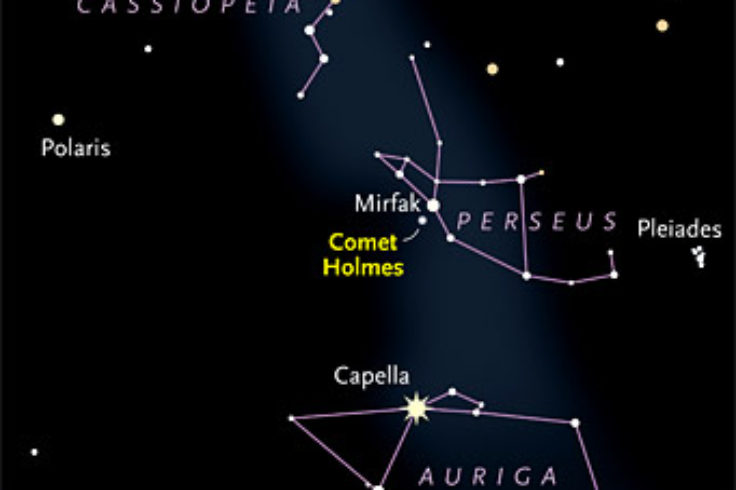 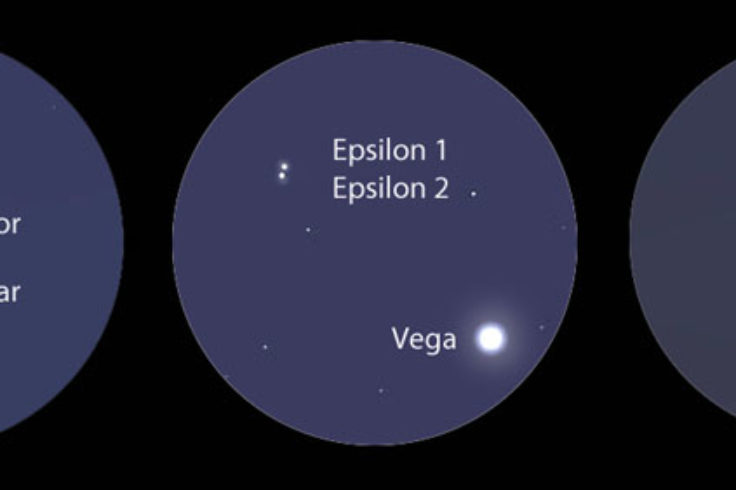