Some daily events in the changing sky for November 9 – 17.

Comet Holmes is still an easy naked-eye sight. The comet continues enlarging daily without losing any of its brightness. It's easy to find in Perseus in the evening sky — a fuzzball among the pinpoint stars. Don't wait; moonlight starts returning to the evening sky around November 15th. See our finder charts, full story, and reader photos. 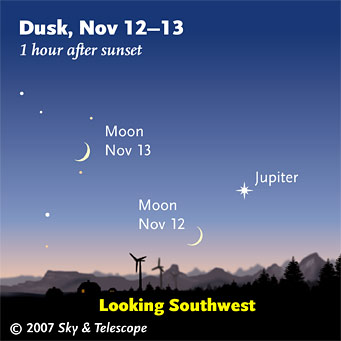 The crescent Moon joins Jupiter low in the southwest after sunset. (These scenes are drawn for the middle of North America. European observers: move each Moon symbol a quarter of the way toward the one for the previous date.)

Mercury (about magnitude –0.6) is having its best morning showing of the year. Look for it about 50 or 60 minutes before sunrise low in the east-southeast, very far lower left of bright Venus. Don't confuse it with fainter Spica, which is getting farther to Mercury's upper right.

To find your local sunrise time (and much else), make sure you've put your location into our online almanac. Be sure the Daylight Saving Time box is unchecked.

Venus (magnitude –4.4, in Virgo) blazes in the east-southeast before and during dawn. It forms a nearly equilateral triangle this week with Arcturus far to its left and Mercury far below them.

Mars (magnitude –0.7, in Gemini) now rises as early as 8 or 8:30 p.m. It shines very high toward the south in early morning — passing near the zenith, in fact, for mid-northern observers. 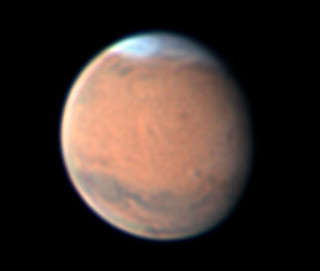 Even the "bland" side of Mars is interesting in this shot from October 31st. The dark horizontal band near bottom is (left to right) Mare Cimmerium, Mare Sirenum, and Mare Australe. Note the two-toned North Polar Hood of clouds at top. The little dark spot just upper right of center is Olympus Mons. Also visible are the other three big Tharsis volcanos — they form a straight diagonal line, lower left to upper right, to the lower right of Olympus Mons. The two on the ends, Ascraeus Mons (upper right) and especially Arsia Mons (lower left), look like 3-dimensional bumps; being near the terminator, their sunnier slopes are on the left. Alternatively, the brightness of their left sides could just be due to weak orographic clouds. This has been a controversy; see Sky & Telescope for November 2005, page 66, and February 2006, page 12.

In a telescope Mars now appears 13 arcseconds in diameter, nearly as wide as the 15.9" it will display around its Christmas-season opposition. The Martian dust storms of July and August have ended, but the planet's atmosphere still contains some dust, making surface features fairly low-contrast. For all about observing Mars with a telescope this season, see the guide and surface-feature map in the November Sky & Telescope, page 66.

Jupiter (magnitude –1.9, in southern Ophiuchus) is sinking very low in the southwest in twilight. It sets soon after dark.

Pluto, near Jupiter, is lost in the sunset.

All descriptions that relate to your horizon or zenith — including the words up, down, right, and left — are written for the world's midnorthern latitudes. Descriptions that also depend on longitude (mainly Moon positions) are for North America. Eastern Standard Time (EDT) equals Universal Time (UT, UTC, or GMT) minus 5 hours.