Some daily events in the changing sky for May 8 – May 16. 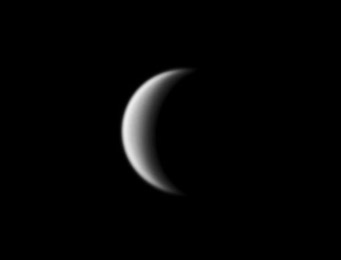 Have you tried looking for Venus with your scope in broad daylight after sunrise? Sean Walker shot this stacked-video image of Venus at 10:04 a.m. local time on April 26th. He used a 12.5-inch reflector, a DMK21AU04.AS camera, and a Baader 300–400nm ultraviolet filter. Venus's crescent was 21% illuminated at the time.

Venus (magnitude –4.7) shines brightly low in the east during dawn. Don't confuse it with Jupiter, higher and far to the right in the southeast. In a telescope, Venus is now a thick crescent about 33% sunlit. The best telescopic views come in full early-morning daylight, when Venus is higher in steadier air.

Mars (only magnitude +1.2) remains 6° lower left of Venus this week. Bring binoculars; Mars is about 200 times fainter than Venus!

Jupiter (magnitude –2.3, in Capricornus) shines brightly in the southeast before and during dawn.

Saturn (magnitude +0.8, in Leo) is highest in the south at dusk and moves to the southwest later. Regulus, not quite as bright, sparkles 15° to its right at dusk, and lower right later. 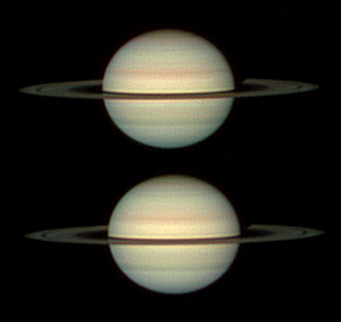 Have you noticed how dim Saturn's rings are getting? It's because they've been turning more nearly edge-on to the Sun than to Earth. The black line across Saturn's globe is a combination of the dimly sunlit surface of the rings themselves and their darker shadow on Saturn's globe. The difference between the two dark lines is barely resolved in the top image here. Christopher Go took these images 15 minutes apart on the evening of May 11th in the Philippines. South is up; both the Sun and Earth see the rings' south face.

In a telescope, Saturn's rings appear 4° from edge on, their widest this year. They'll close to exactly edge-on September 4th, when, unfortunately, Saturn will be out of sight practically in conjunction with the Sun.

Uranus (6th magnitude) is low in the sunrise glow. It's to the upper right of Venus but 17,000 times fainter.

Pluto (14th magnitude, in northwestern Sagittarius) is highest in the south before the first light of dawn. It's 250 times fainter than Neptune.