Venus (magnitude –3.9) is just above the southeast horizon 20 minutes before your local sunrise. It's getting lower each morning. Bring binoculars.

Mars (magnitude +1.2) still glimmers very low in the west-southwest in the fading glow of sunset. Don't confuse it with Fomalhaut well to its left. 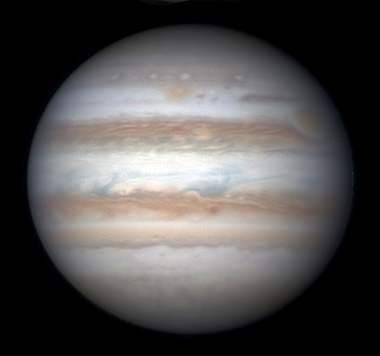 Jupiter on January 27th. South is up. The orange Oval BA, on the central meridian near top, has now moved far ahead of the Great Red Spot (near the right limb) after passing it in mid-September. Complex bluish festoons jut equatorward from the south edge of the North Equatorial Belt.

Jupiter (magnitude –2.5, in Taurus) is the first "star" to come out high in the southeast after sundown. It dominates the high south after dinnertime, with orange Aldebaran lower left or left of it, and the Pleiades to its upper right or right.

For many weeks, Jupiter has been drawing closer to forming a straight line with Aldebaran and Pleiades. It'll never get there. Jupiter reaches its stationary point on January 30th, when it ceases its retrograde (westward) motion against the stars and starts moving back eastward.

In a telescope, Jupiter has been slowly shrinking as Earth pulls ahead of it in our faster orbit around the Sun. It appears about 44 arcseconds wide. The 5th-magnitude star 0.1° south of it this week is Omega-2 Tauri.

Saturn (magnitude +0.6, in Libra) rises in the east-southeast around 1 a.m. local time. By the beginning of dawn it's fairly high in the south — more or less between Spica, far to its right, and Antares farther to its lower left.

Uranus (magnitude 5.9, in Pisces) is still in view in the southwest right after dark. Finder chart.

Neptune (magnitude 8.0) is lost in the sunset glow in the background of Mars.