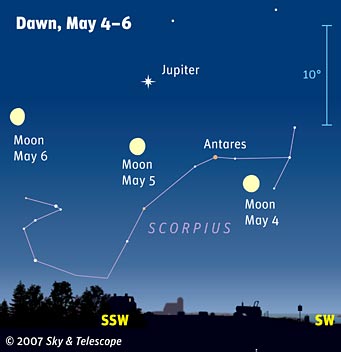 The Moon passes Antares and Jupiter in the morning sky as it wanes after full. (These scenes are drawn for the middle of North America. European observers: move each Moon symbol a quarter of the way toward the one for the previous date. The blue 10° scale is about the size of your fist held at arm's length. For clarity, the Moon is shown three times actual size.)

Want to become a better amateur astronomer? Learn your way around the constellations. They're the key to locating everything fainter and deeper to hunt with binoculars or a telescope. For an easy-to-use constellation guide covering the whole evening sky, use the big monthly foldout map in each issue of Sky & Telescope, the essential magazine of astronomy. Or download our free Getting Started in Astronomy booklet (which only has smaller, bimonthly maps).

Once you get a telescope, to put it to good use you'll need a detailed, large-scale sky atlas (set of maps; the standard is Sky Atlas 2000.0) and good deep-sky guidebooks (such as Sky Atlas 2000.0 Companion or the enchanting though increasingly dated Burnham's Celestial Handbook). Read here how to use them most effectively.

Mercury is hidden, for now, in the glare of the Sun. Later in May it will leap up from the sunset for its best evening showing of the year (for skywatchers at mid-northern latitudes). 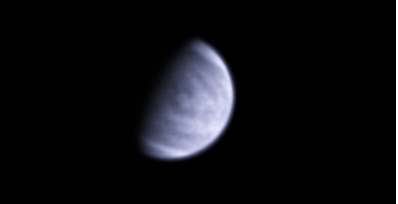 The clouds of Venus may be featureless to the eye, but not in ultraviolet light. Here's the latest in Sean Walker's continuing series of UV Venus imagery. He took this stacked video image (false-colorized to show contrasts better) with a 12.5-inch reflector at f/40 on the evening of May 8th. Click the image for a daily animation, May 2 to 5. The cloud patterns change a lot from day to day!

Venus (magnitude –4.2, at the Taurus-Gemini border) is the brilliant "Evening Star" in the west during and after twilight. To Venus's lower right, watch the almost-first-magnitude star Beta Tauri moving farther downward day by day.

In a telescope Venus is nearing dichotomy (half-lit phase). Venus will probably appear exactly half-lit a week or so before it reaches its greatest elongation from the Sun on June 8th. The smallest telescope will show its changing phases.

Mars (magnitude +1.0, crossing from Aquarius into Pisces) is still low in the east-southeast during dawn. If you turn a telescope on it, don't worry, your scope's not broken. Mars is only 5 arcseconds wide — it's supposed to be a tiny, featureless blob. 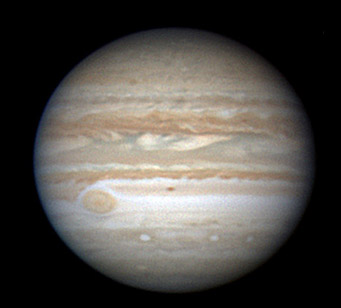 Jupiter's Great Red Spot is still quite prominent, and a white streak from its northern edge runs all the way rightward across this image — dividing the South Equatorial Belt into a dark north side and a pale south side. The South Tropical Zone and South Temperate Zone are very bright white, with the dark South Temperate Belt almost nonexistent between them. Note the unusual crisscrossing plumes and festoons in the north side of the Equatorial Zone. North is up.

Jupiter (magnitude –2.5, in southern Ophiuchus) rises around 10 or 11 p.m. daylight saving time and dominates the south in the hours before dawn. Antares, less bright, sparkles 10° to Jupiter's right when they rise, and to its lower right by daybreak.

Saturn (magnitude +0.4, at the Leo-Cancer border) shines high in the southwest to west during evening. Regulus, less bright at magnitude +1.4, is 12° to its left or upper left. North of Regulus is Algieba (Gamma Leonis), not much fainter — a fine telescopic double star.

Uranus (magnitude 6, in Aquarius) is very low in the east-southeast just before dawn, upper right of Mars.

Neptune (magnitude 8, in Capricornus) is less low in the southeast just before dawn.

Pluto (magnitude 14, in northwestern Sagittarius) is not far from Jupiter in the south before dawn.

To be sure to get the up-to-date Sky at a Glance in future weeks, bookmark this URL:
http://SkyandTelescope.com/observing/ataglance .