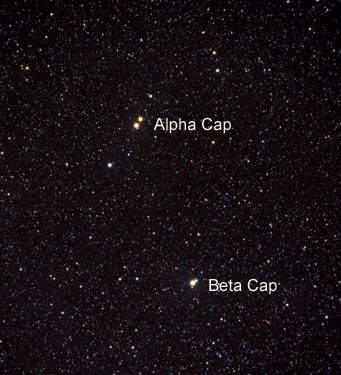 Alpha and Beta Capricorni are 2.3° apart and fit easily into even a 15× field of view. Here they're oriented as they appear from mid-northern latitudes not long after they rise. Both are optical double stars. Alpha can often be split with the unaided eye, but Beta needs optical aid; its components appear closer together, and the fainter one is magnitude 6.0.

Mercury (about magnitude +0.3) remains very low in the west-northwest in twilight, now becoming a little lower each day. Don't confuse it with Regulus to its upper left. Mercury and Regulus will pass 3° apart on July 26th.

Venus is hidden deep in the glow of sunrise.

Mars (magnitude +1.4, in Taurus) is moderately low in the east-northeast as dawn begins to brighten. Look for it very far lower left of bright Jupiter. To Mars's right or upper right is Aldebaran, similar in brightness and color. Farther to Mars's upper left is brighter Capella.

In a telescope Mars is still just a tiny blob only 4.3 arcseconds in diameter. It's on its way to a poor opposition (13.9 arcseconds wide) next March. 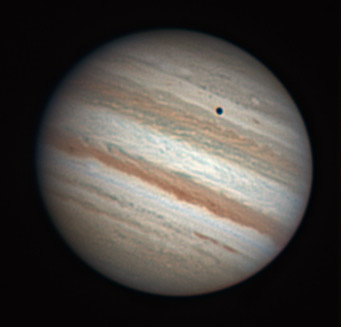 Jupiter on the morning of July 28th, imaged by S&T's Sean Walker. The South Equatorial Belt (above center) remains wide; the North Equatorial Belt remains narrow and darker red-brown. The black dot is the shadow of Io. Walker used a 12.5-inch Newtonian telescope and an Imaging Source camera in "fairly good" seeing.

Jupiter (magnitude –2.3, in southern Aries) rises around 1 a.m. daylight saving time and shines high in the east-southeast by dawn. Look below it for the head of Cetus, rather dim.

Saturn (magnitude +0.9, in Virgo) is sinking lower in the west-southwest at dusk. Shining 14° left of it is similar, but bluer, Spica. About 1° to Saturn's right is fainter Porrima (Gamma Virginis).

Uranus (magnitude 5.9, in western Pisces) and Neptune (magnitude 7.9, in western Aquarius) are up in good view during the early-morning hours. Here's our printable finder chart for them both.

Pluto (magnitude 14.0, in northern Sagittarius) is highest in the south around 11 or midnight. A big finder chart for it is in the July Sky & Telescope, page 64. 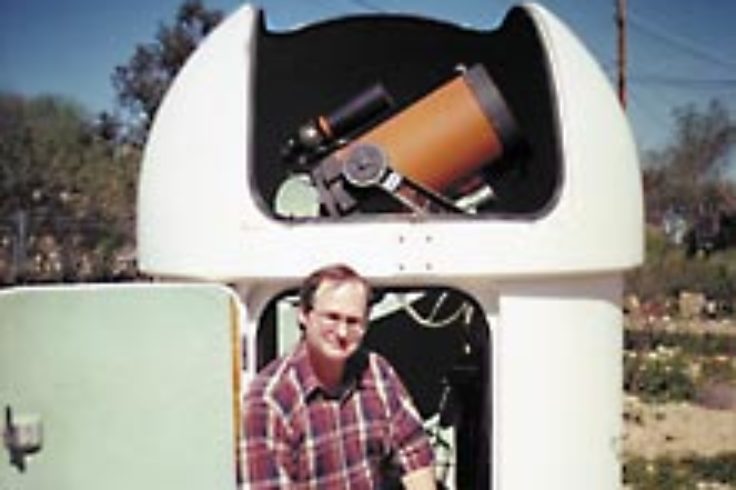