Two months after it erupted, the nova in the Sagittarius Teapot continues to oscillate between about magnitude 4.5 and 6.6. As of May 18th it was down to about 6.6, its faintest yet. And it was redder than ever. See article with charts and a link to an up-to-date light curve.

As twilight fades this evening, spot Venus shining in the west smack between Capella 25° to its right and Procyon 25° to its left.

Arcturus shines high in the southeast these nights. Vega shines much lower in the northeast. Look a third of the way from Arcturus to Vega for dim little Corona Borealis, the Northern Crown, with its one modestly bright star: Alphecca or Gemma.

Two thirds of the way from Arcturus to Vega glimmers the dim Keystone of Hercules.

Continue on down past Vega, and you hit Cygnus.

Arcturus dominates the high southeast during evening. Three fists at arm's length to its lower right is Spica, less bright. Half that distance to the right or lower right of Spica is Corvus, the springtime Crow. Its four brightest stars form a sail shape.

Before the Moon returns to light the evening sky, you can use a 6- or 8-inch or larger telescope to examine three Karachentseva Triplets of galaxies in Virgo — using Steve Gottlieb's "Going Deep" column, charts, and images in the May Sky & Telescope, page 59.

Three doubles under Saturn. Once Saturn has risen well up in the southeast in late evening (see the illustration above), examine the little star 2° below it. That's Beta (β) Scorpii, a fine double star for telescopes. Another 1° below that is the very wide naked-eye pair Omega1 and Omega2 Scorpii, nearly vertical and a little too faint for the scene at the top of this page. Binoculars show their slight color difference. Left or lower left of Beta by 1.6° is Nu Scorpii, another fine telescopic double. High power in good seeing reveals Nu's brighter component itself to be a close binary, separation 2 arcseconds.

The waxing crescent Moon shines under Venus this evening, in the feet of Gemini as shown here. The brightest star in Gemini's feet is Alhena, Gamma (γ) Geminorum; North Americans can spot it not far to the Moon's left or upper left.

This evening the Moon shines between Venus and Procyon. And Venus forms the bottom of a tall V with Pollux and Castor; it's now 9° from each.

Look below the waxing crescent Moon for Procyon, the Little Dog Star. Right of the Moon shines brilliant Venus with Pollux and Castor over it.

The Moon positions itself under Jupiter this evening. They may look close together, but Jupiter is currently 2,100 times farther away — which is just as well, since it's 26,000 times as massive!

Mercury is fading and sinking out of sight in the glow of sunset.

Venus (magnitude –4.3, in Gemini under Castor and Pollux) glares strikingly bright in the west during and after twilight. It doesn't set in the west-northwest until almost two hours after dark. In a telescope Venus is still very slightly gibbous; it's is approaching dichotomy ("half-moon" phase).

Jupiter (magnitude –2.0, in Cancer) shines high in the west as the stars come out. It's the second-brightest point in the sky after Venus. They're closing in toward each other: from 35° apart on May 15th to 29° apart on the 22nd. They're heading toward a spectacularly close conjunction at the end of June.

Saturn (magnitude 0.0, just above the head of Scorpius) shines low in the southeast in twilight, higher after dark, and highest in the south around 1 a.m. It's close to its May 22nd opposition. Some 10° below Saturn is twinklier orange Antares, less bright. In a telescope, Saturn's rings are tilted a broad 24° from edgewise.

Uranus (magnitude +5.9, in Pisces) is just above the eastern horizon as dawn begins to brighten.

Neptune (magnitude +7.9, in Aquarius) is low in the east-southeast before the first light of dawn.

Thanks for the great tips on how to observe the three doubles near Saturn! I split all three tonight, though I couldn't split the primary of nu Sco. You gave a lovely tour! 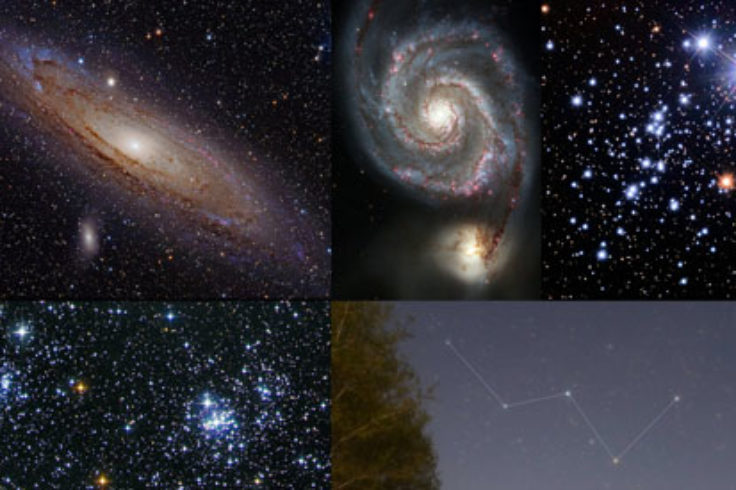