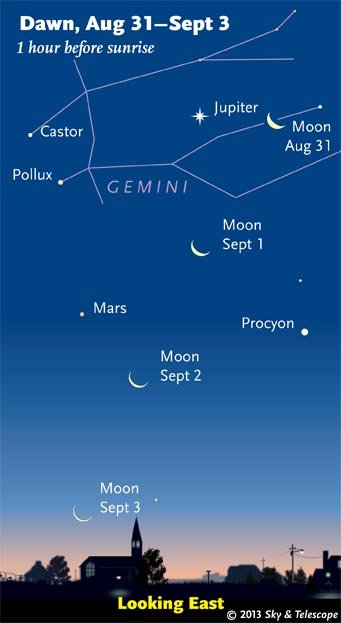 As dawn brightens, watch the waning crescent Moon passing Jupiter, Mars, and company in the eastern sky. (Positions are drawn for the middle of North America.)

Mercury is hidden in the glare of sunset.

Venus (magnitude –4.0) shines brightly low in the west in evening twilight, far below Arcturus. Look a little to its left for much fainter Spica early in the week, then watch Venus close in on Spica every day. It passes less than 2° above Spica on September 5th. Binoculars help. Look too for Saturn about 14° upper left of Spica.

Mars and Jupiter shine in the east before and during dawn. Jupiter, in Gemini, is the highest and brightest (magnitude –2.0). Look for fainter Mars (magnitude +1.6, in Cancer) increasingly far to Jupiter's lower left. Off to Mars's right shines Procyon, somewhat brighter.

Uranus (magnitude 5.7, in Pisces) and Neptune (magnitude 7.8, in Aquarius) are well up toward the southeast by 11 p.m. Finder charts for Uranus and Neptune.