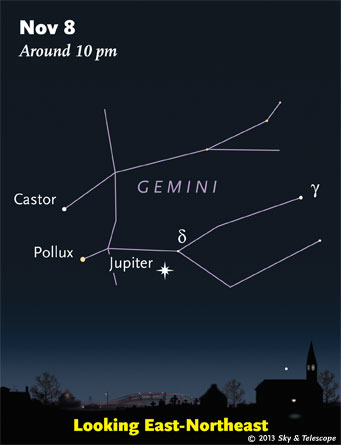 Jupiter is nearly stationary all week with respect to the surrounding stars of Gemini. Jupiter and Gemini come up into good view about a half hour earlier each week as the season proceeds.

Mercury and Saturn are hidden in the glare of the Sun.

Venus (magnitude –4.5) shines brightly in the southwest during dusk. It sets nearly an hour after dark now. In a telescope, Venus has waned to appear a trace less than half-lit.

Mars (magnitude 1.5, in Leo) rises around 1 or 2 a.m. standard time. It's moving eastward against the background stars, pulling farther away down from Regulus. By dawn, Mars and Regulus are high in the south.

Comet ISON is below Mars, in the hind feet of Leo, before the first light of dawn. But it's still a faint telescopic target at about 9th magnitude. Use the finder chart for it in the November Sky & Telescope, page 50.

Jupiter (magnitude –2.4, in Gemini) rises in the east-northeast around 9 or 10 p.m. standard time and blazes high in the south before dawn. Left of it after it rises are Castor and Pollux. In a telescope Jupiter has grown to 41 arcseconds wide, as it heads toward its January 5th opposition.

Uranus (magnitude 5.7, in Pisces) and Neptune (magnitude 7.9, in Aquarius) are high in the southeast and south, respectively, in early evening. Finder charts for Uranus and Neptune. See also the October Sky & Telescope, page 50.

All descriptions that relate to your horizon — including the words up, down, right, and left — are written for the world's mid-northern latitudes. Descriptions that also depend on longitude (mainly Moon positions) are for North America. Eastern Daylight Time (EDT) equals Universal Time (also known as UT, UTC, or GMT) minus 4 hours. Eastern Standard Time (EST) is UT minus 5 hours. 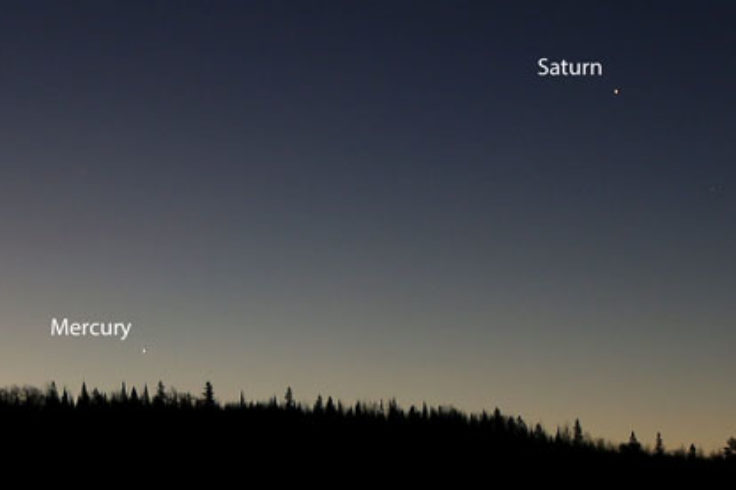